A New Year’s Resolution for Obama: Learn From Carter 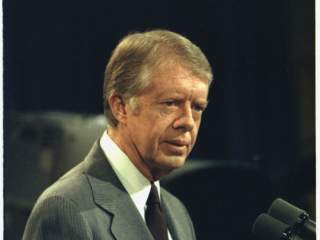 On Christmas Eve thirty-six years ago, the Soviet Union invaded Afghanistan. This was the first direct use of Soviet troops outside the Eastern Bloc since World War II, “a watershed event of the Cold War.”

The Carter administration was already reeling from a series of foreign policy failures. As historian John Lewis Gaddis wrote, the invasion was “only the most dramatic of a series of humiliations for the United States.” The Soviets had deployed nuclear missiles to Europe in 1977 and Soviet-backed Cuban troops had intervened in Angola in 1975 and Ethiopia and Zaire in 1977. The Iranian revolution and subsequent hostage crisis, the rise of the Soviet-backed Sandinistas in Nicaragua and the Vietnamese invasion of Cambodia added to the general sense of crisis.

Carter initially refused to confront Soviet aggression. Just a year before the invasion, a communist coup in Kabul had ended hopes of a more constructive relationship between the U.S. and Afghanistan. Carter’s National Security Advisor, Zbigniew Brzezinski, recommended cutting diplomatic ties, but Carter rejected his advice and, siding with the State Department, recognized the new pro-Soviet government. Shortly thereafter the new U.S. ambassador to Afghanistan was assassinated in February 1979. Yet President Carter was still holding on to the hopes of détente. He was determined, as he had earlier told Leonid Brezhnev, “to improve relations with the Soviet Union on the basis of reciprocity, mutual respect and advantage.”

The Soviet invasion of Afghanistan shocked Carter into changing course. Six days after the invasion, Carter admitted that his “opinion of the Russians has changed more drastically in the last week than even the previous two and a half years before that.” Addressing Congress the following month, Carter described the Soviet move as the “most serious threat to peace since the Second World War.” Carter authorized increased lethal military support to the Afghan mujahideen, withdrew the SALT II treaty from Senate consideration, cancelled grain exports to the Soviet Union, restricted trade in strategic items, lead a controversial boycott of the Moscow Olympics and articulated the “Carter Doctrine” to protect the Persian Gulf from outside (i.e. Soviet) interference. Most importantly, Carter began a defense build-up that was further accelerated by Ronald Reagan.

Today, Republicans often call President Obama the worst foreign policy president since Jimmy Carter. But it is increasingly clear this comparison is unfair to Carter. Faced with a series of foreign policy challenges, Carter was willing to admit his previous approach was not working and take steps, in his words, to “make the Soviets pay for their unwarranted aggression.” President Obama has shown no such urgency or adaptability. Faced with a resurgent Russia, an assertive China that has claimed sovereignty over an entire swath of the Pacific Ocean, the rise of ISIS in Iraq, the related “apocalyptic disaster” in Syria and increasing threats to the homeland from radical Islamic terrorism, President Obama simply refuses to change course.

Instead, the president castigates his critics as chest-beating warmongers, sets up a straw man choice between his “lead from behind” approach and an all out invasion of the Middle East, dismisses Putin as playing a weak hand (not understanding that card sharks can and do win with weak hands), and turns a blind eye to Chinese cyber attacks on America and expansive maritime claims. In an interview that aired the day before the Paris attacks, the president argued ISIS was “contained.” In the wake of San Bernardino—the most lethal terrorist attack on U.S. soil since 9/11—rather than rallying the nation to confront the threat, he gave a brief Oval Office address to tell the public, not to fear, his strategy to “ultimately” defeat ISIS is working.

Asked in early August what lessons he’d learned from recent crises, President Obama said, “There’s no doubt that, after six and a half years, I am that much more confident in the assessments I make and can probably see around the corners faster than I did when I first came into office.” He went on: “And I am confirmed in my belief that much of the time, we are making judgments based on percentages, and . . . there are always going to be some complications. . . so maybe at the same time as I’m more confident today, I’m also more humble.”

To the extent that humility involves a willingness to learn from failure and to make necessary changes, as we approach the new year we are reminded that Barack Obama is no Jimmy Carter. For as Carter told the nation on January 4, 1980: “History teaches, perhaps, very few clear lessons. But surely one such lesson learned by the world at great cost is that aggression, unopposed, becomes a contagious disease.” In the face of Russian, Chinese and radical Islamic terrorist aggression, this is a lesson that President Obama has yet to learn.

Robert C. O’Brien is a lawyer in Los Angeles. A former U.S. Representative to the UN, he was a senior advisor to Governor Scott Walker’s and Governor Mitt Romney’s presidential campaigns. He can be followed on Twitter at @robertcobrien. Mike Gallagher served as the foreign policy director for Governor Scott Walker, a professional staff member on the Senate Foreign Relations Committee, and a Captain in the U.S. Marine Corps. He can be followed on Twitter at @wimikeg.