New York: End of the Road for Sanders, Warning Signs for Trump 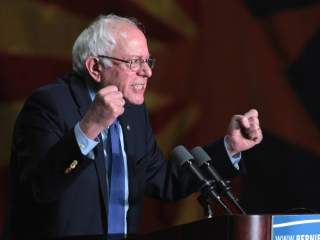 Hillary Clinton and Donald Trump did not merely declare victory in New York Tuesday night. They crowned themselves the winners of their parties’ respective nomination contests.

Clinton did so through communications director Jennifer Palmieri, who said Bernie Sanders’ “behavior” has “been destructive.” Surrogates also whispered reminders that New York was widely viewed as a must-win state for Sanders.

Trump, as is his wont, did so himself. “Senator Cruz is just about mathematically eliminated,” the Republican frontrunner said in an election night speech that was subdued by his standards but not entirely free of the bravado for which he is famous.

As it happens, Clinton’s case is a bit stronger. New York was the end of the road for Sanders’ having a realistic path to defeating Clinton outright in the remaining primaries and caucuses (or caucus—unfortunately for Sanders, there’s only one left).

The Vermont senator has scored exactly one upset over Clinton, in the Michigan Democratic primary. But Ohio, Illinois, Massachusetts and now the Empire State rank among his campaign’s disappointments. Based on that track record, it’s hard to imagine Pennsylvania will turn out much differently.

But the Associated Press agrees with Trump: Cruz cannot get to 1,237 though the primary process before the Republican National Convention. Only Trump still can. For all the Texas senator’s delegate-gathering in Wyoming, Colorado and beyond, in spite of his impressive win in Wisconsin, Cruz’s path to a first-ballot win in Cleveland is as nonexistent as John Kasich’s.

That would be the Ohio governor who has won only one state and still trails former candidate Marco Rubio in the delegate count. And who finished ahead of Cruz in New York.

What Cruz can do is keep Trump from winning and therefore hope to prevail on the second ballot or afterward. Trump is doing everything he can to make sure his supporters would regard that outcome as illegitimate.

“Nobody should take delegates and claim victory unless you get those delegates with voters and voting,” he said. “We’re going to go back to the old way. It’s called, ‘You vote, and you win.’”

Trump’s detractors call this “whining,” and certainly when you read the billionaire’s occasionally unhinged tweets, it’s hard to argue. But when he makes the case in a more disciplined way, you are reminded that if the race continues on its current trajectory Cruz will be millions of votes and hundreds of delegates behind Trump when he asks a contested convention to crown him.

This ain’t horseshoes, Republican National Committee Chairman Reince Preibus retorts when asked if Trump should be given the nomination if he just gets close enough. A good line, but it obscures the fact that the rules would do more work to decide the convention outcome than at any point in the modern primary process, effectively taking delegates from the candidate with plurality support and giving it to one with minority support.

It’s fitting that both Trump and Cruz mentioned Sanders in their election night speeches. Trump did so to say in effect, “Look, I’m not the only candidate getting screwed over by his party establishment. I may not like the guy, but come on.” Cruz, on the other hand, made common cause with Sanders in the “year of the outsider,” with the Tea Party sharing the “same diagnosis” of the country’s ills as his socialist Senate colleague but “very different paths to healing.”

Cruz and Sanders are outsiders who have flashed some strong appeal but rarely win outside of ideal circumstances and have particularly excelled at small-ball caucus organizing. But when either of them has been required to significantly expand their base, they have usually failed. And Cruz now has much more tacit support from party insiders than Sanders will ever receive on the Democratic side.

Trump can contrast himself with Sanders and Cruz by saying, “I’m an outsider playing a game that has been rigged against me by the establishment and I’m still winning.”

Yet there is a cautionary tale for Trump in how Clinton has beaten Sanders. Note her campaign’s relentless focus on a New York Daily News;interview in which Sanders seemed to have no idea how to implement the solutions he was proposing on the trail.

Clinton has repeatedly portrayed Sanders as a pie-in-the-sky politician who makes promises he can’t possibly keep. This line of attack appears to be working. That ought to terrify Trump.

Yes, he is an accomplished businessman rather than someone who resembles an aging hippie in perpetual search of a job. Trump is also someone much less conversant in policy details than Sanders.

If Trump can be made to look like he’s all talk and no action, on top of his already high negatives among core voting blocs like women, Clinton is going to be beaming in New York on a more consequential election night later this year.