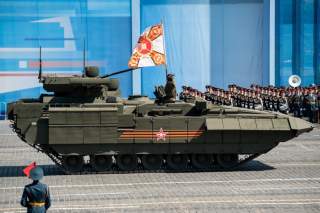 The lobbying for arming Ukraine has been underway for several months, but the passage of time has not increased the quality of what passes for a debate on this topic. This is particularly lamentable because the parties involved (Ukraine, Russia, Moscow’s Donbas allies, the United States and the EU) could soon start down a road that leads to a deepening of the conflict.

On one side of the debate stands a disparate coalition that blames Russia for everything that has gone wrong since the February 2014 uprising that deposed Ukrainian president Viktor Yanukovych. Some within this camp insist that Vladimir Putin has transformed Russia into a neofascist state that is determined to resurrect an empire and trample global norms and international law along the way. To them, any effort to explain why Russia might have viewed the steady movement of the EU and NATO toward its borders with apprehension amounts to blessing Putin’s domestic and foreign policy and betraying democratic principles to boot. Explanation, in this view, is equivalent to endorsement. No lack of moral certitude here.

Historically, great powers—including the United States, as a cursory look at its history demonstrates—have resisted their rivals’ attempts to extend influence into areas deemed vital for national security and standing. But this observation cuts no ice with those who regard Moscow’s behavior as nothing more than an amalgam of mendacity and Machtpolitik.

They dismiss the proposition that Russia might have been unsettled by the prospect of a Ukraine integrated into the EU. The EU, they point out, is an economic entity, not an alliance, and the Kremlin knows this full well. Hence, its supposed apprehension about the strategic consequences of Kyiv’s alignment with the EU is bogus—another instance of Putinist propaganda—and those who give it credence are either misinformed or dupes. Besides, they say, Ukraine has no chance of joining the EU anytime soon.

That the EU, by virtue of its Common Security and Defense Policy (CSDP), has a military element—no matter how inchoate—seems to have gone unnoticed by this group. The same goes for the near-total overlap in membership between the EU and NATO.

Those who believe that Russia alone bears the blame for the Ukraine crisis insist that NATO had no plans to bring Ukraine into its ranks in the run-up to the 2014 crisis and that Moscow’s apprehensions on this score amount to little more than propaganda.

But back in the early 1990s, the chances that Romania, Bulgaria and the Baltic trio would join both coalitions seemed remote, and Ukraine’s membership in NATO was in fact under discussion during the tenure of President Leonid Kuchma. These, it seems, are inconvenient facts to be forgotten because only lies emanate from the Kremlin.

Russia certainly sought, in multiple ways, to shape Ukraine’s internal and external policies—and well before Putin came on the scene, by the way. Yet it did not attempt to annex Crimea or to sponsor secessionist statelets in Ukraine’s east prior to 2014. On February 21 of that year, the Kremlin teamed up with the EU to help forge a February 21, 2014 political settlement between Yanukovych and the opposition that called for forming a national unity government, pruning the powers of the presidency (by reverting to the 2004 constitution) and holding early (not later than December) presidential elections.

To be fair, there are, on the other side of the Ukraine debate, those who have also succumbed to hyperbolic simplemindedness. For example, the insistence that the conflagration in Ukraine stems from NATO’s expansion pure and simple represents a classic example of the single-factor fallacy. The contention that Ukraine’s own politics are fascist in a fashion or that anti-Semitism represents a rising trend in Ukrainian society is no less inaccurate, and anyone who has spent time recently in various parts of Ukraine and met its officials (in Kyiv and the outlying areas), leaders of civic organizations, journalists and academics can attest that it is baseless. As all countries do, Ukraine has its extremists, but they are scarcely the prime movers of its politics and remain a fringe element. While there are sound reasons not to flood Ukraine with American weaponry, the supposed extremism of Ukrainian politics is not among them.

As a sop to those who have pushed for arming Ukraine, the Obama administration has begun training Ukraine’s National Guard—regrouped private militias that, at least in an administrative, if not substantive, sense are overseen by the defense and interior ministries. (Canada and Britain are also providing training.) The White House has also allocated some $118 million for “nonlethal” equipment to bolster Ukraine’s defenses.

Meanwhile, the creaky Minsk II ceasefire could well collapse. Shelling across the line of control remains routine. Moreover, the Kyiv leadership and the Donbas separatists both have reason to torpedo Minsk II—the former to force Obama’s hand, the latter to prevent Putin from abandoning them for a deal with the West that lifts economic sanctions on Russia.

If full-scale war erupts, Obama will face intense pressure to wade in deeper. Having already dipped his toes in the water by training Ukraine’s National Guard and providing nonlethal equipment, he will be called upon to ramp up the military training and to send offensive arms. Those favoring a tougher line toward Russia will claim that American “credibility” (a perennial formulation in U.S. foreign-policy discourse) will crumble and that Putin, emboldened, will move on Kyiv, perhaps even on the Baltic states. They will demand that the United States prevent this by demonstrating its resolve in hopes of sending Russia a strong signal.

Yet the case for arming Ukraine remains as incoherent as it was when first unveiled back in February—and this is for three reasons.

First, its proponents have still not revealed the objective that underlies their recommendation. Do they hope to increase Kyiv’s bargaining power so that Putin eventually agrees to peace terms that keep Ukraine whole and secure? Do they wish to provide Kyiv the military wherewithal to retake the Donbas “republics” and (eventually) Crimea? Or are they seeking to persuade NATO’s skittish eastern flank that Article V of the transatlantic treaty actually amounts to something tangible? Seek, but you will not find.

The advocates of arming have been no less elusive when it comes to specifying the sorts of arms they have in mind (and in what amounts), how shipping weapons to Ukraine can make a positive difference while its army remains dysfunctional, and what procedures they envision for preventing American arms from falling into the wrong hands. There are serious, knowledgeable and patriotic people in Ukraine who have thought hard about these issues. The same cannot be said about the American proponents of arming Ukraine.

Second, those who favor arming Ukraine assume that once American weapons start flowing to Ukraine, Putin will realize that Washington means business, come to his senses and back off. Let’s concede that this outcome cannot be dismissed out of hand. Even so, those proposing a dramatic shift in policy—the call to arm Ukraine certainly fits the description—must explain what they propose to do if the party they seek to influence does not respond as expected. The advocates of arming Ukraine have yet to enlighten on this point. Presumably, we are to trust that Putin will react in the way they assume he will. Hope is the coin of their realm.

But throughout this crisis, Putin has confounded prevailing expectations. So we can hardly dismiss the possibility that, taking advantage of propinquity and the presence of Russian regular and irregular forces in the Donbas (the United States by contrast is far from battlefield and has no presence there), he will step up support to the separatists and the Russian personnel backing them rather than dutifully play the part assigned to him by those eager to arm Ukraine.

Putin won’t back away if Washington arms Ukraine. He has invested too much of his reputation and political capital in this conflict and cannot retreat without damaging his standing at home, and he has good reason to test America’s will because he understands that Ukraine matters to Russia more than it does to the United States.

If Putin does raise the stakes, those demanding that Ukraine be armed won’t then say, “Well, we did what we could. Ukraine must now defend itself.” Instead, they will once again invoke (what else?) credibility and demand that Washington adopt even tougher countermeasures. If the Obama administration follows their counsel, the United States will be engaged in a war on Russia’s doorstep and will have two choices down the line, neither of them good: doubling down or backing down.

The third argument offered for arming Ukraine invokes the sanctity of international norms, human rights and law. From this vantage point, the challenge faced by the West transcends Ukraine; the ground rules and principles undergirding the post–Cold War political order are at stake. Appeasing Russia would amount to condoning or even encouraging aggression and treating sovereignty and the UN Charter as dispensable. Ukraine, in this view, represents the canary in the coalmine. What the West does in Ukraine will determine what kind of political world we will inhabit.