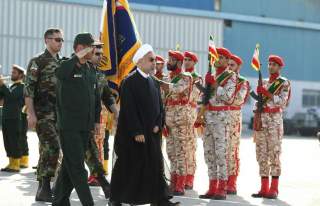 A great myth in the West has always held that Iran’s Islamic Revolutionary Guard Corps (IRGC) is opposed to any nuclear agreement between Iran and the P5+1—the five permanent members of the United Nations Security Council plus Germany. Since the Lausanne Accord was announced, neoconservatives and their allies have continued to claim that the high command of the IRGC opposes the agreement, and may even try to scuttle it. This claim is demonstrably false.

After the Geneva interim agreement between the two sides was announced in November 2013, this author opined that the IRGC would not try to scuttle it. As it turned out, Iran kept its commitments to the interim agreement, and—according to numerous reports by the International Atomic Energy Agency (IAEA)—carried out its obligations under the agreement. Thus, now that the Lausanne Accord has been reached, the question again is: will the IRGC block the final agreement, to be signed by the end of June?

I argue once again that the answer to the question is a firm no.

First and foremost, we should keep in mind that the IRGC is not a homogeneous force with its officers and fighters having the same opinion on every issue. One must also distinguish the IRGC’s high command from the bulk of its fighting force. Moreover, it is only natural that the IRGC commanders have different opinions about the most important domestic and foreign issues facing Iran.

Iran’s Supreme Leader Ayatollah Ali Khamenei is the commander-in-chief of the armed forces, and the military is loyal to him. Ironically, even though the IRGC, which is an ideological force, must, naturally, be more obedient to Khamenei than Iran’s regular armed forces, it is the regular military that is absolutely obedient to the Supreme Leader. The reason is that the regular military’s main task is defending Iran’s borders and territorial integrity, whereas the IRGC, invoking Article 150 of the Islamic Republic’s Constitution, has always claimed to be the guardian of the 1979 revolution.

Right from the beginning, Article 150 linked the IRGC with Iran’s internal affairs. The revolutionary leader, Ayatollah Ruhollah Khomeini, tried to keep the IRGC out of domestic affairs, but after Khamenei took over as the Supreme Leader in 1989, he welcomed its involvement in the political and economic affairs of the state. As a result, the IRGC’s intervention in politics and the economy transformed it into the most powerful economic and political force in the country. It is for this reason that the IRGC is more independent that the regular armed forces.

Khamenei and other high officials consider Iran’s nuclear program as an important achievement of the revolution. Hence, the IRGC must protect the program. The Lausanne Accord, however, while forcing Iran to make major concessions, only gradually lifts the sanctions on Iran. Thus, many expected the IRGC commanders to harshly criticize it. But, in fact, they supported it on two conditions.

Six important positions of the IRGC commanders and the security forces

In the aftermath of the Lausanne Accord being signed, all the important security officials and military commanders have taken positions on it. The positions of six important officials are particularly noteworthy.

First, in an opinion piece on April 4, Tehran’s Mayor Mohammad Baqer Qalibaf, an IRGC brigadier general, wrote, “I thank our nuclear negotiations team that have truly tried to use their utmost power to negotiate a deal that would bear desirable results for the Iranian nation.” He added: “Having high expectations for negotiations at this level is unrealistic. Generally speaking, all negotiations represent a process of making concessions by both sides. It is of course important that the concessions made by both sides be proportional, but some people act as if all expectations would be achieved.” Qalibaf emphasized that, in return for Iran’s concessions, all the economic sanctions imposed on Iran must be lifted all at once.

Second, on April 5, Major General Hassan Firoozabadi, the chief of staff of the armed forces, congratulated Khamenei for the Lausanne Accord. In an op-ed piece, General Froozabadi wrote that under the leadership of the Supreme Leader, President Hassan Rouhani and Foreign Minister Mohammad Javad Zarif “took another important step in regaining the righteous rights of the sacred Islamic Republic system through negotiations about peaceful use of nuclear energy,” and “brought honor and steadfastness to the Iranian nation.”

Third, on April 7, the IRGC chief Major General Mohammad Ali Jafari, stated that by setting aside its policy of regime change and military attacks, the United States “paved the way for the resolution of the nuclear issue.” Praising Iran’s diplomats, he said “Iran’s nuclear negotiation team has been able to defend the righteous rights of the Iranian nation, and the nation and the IRGC appreciate the honest efforts of the dear negotiation team for insisting on not crossing the red lines that had been set by the state.” General Jafari emphasized, “Our nuclear negotiation team must keep in mind that our red line, in addition to [the West] recognizing our rights for having the nuclear fuel cycle and its associated research and development, is lifting all of the economic sanctions at once as the core of the Iranian nation’s demand.” General Jafari referred to 2015 as “fateful year” for Iran’s future, and declared that negotiations in Khamenei’s “heroic flexibility” should lead to lifting of all sanctions.

Fourth, in an interview with the state-run television on April 18, General Jafari’s deputy, Brigadier General Hossein Salami, commented on the United States’ fact sheet that supposedly grants the IAEA the authority to inspect all suspected sites, including military bases, saying, “The significance of this issue is so high that we will not allow anyone to even think about it [inspecting the military sites]. Some values are part of any nation’s nature, and this issue [not allowing inspections of military sites] is one such value. We will never allow our national security to be violated by the enemy. Allowing foreign forces to inspect our military bases is tantamount to occupying our land, because all of our military secrets are in such bases.” General Salami declared that inspecting Iran’s military bases is humiliating, and that he is sure that Iran’s nuclear negotiation team consists of “brave, zealous, and pious men” who, if asked about such a possibility, “will slap the requesters.”

Fifth, after meeting with Julie Bishop, Australia’s foreign minister, Rear Admiral Ali Shamkhani, Secretary-General of Iran’s Supreme National Security Council, said that the final comprehensive nuclear agreement is subject to the Western side carrying out its obligations, adding, “Lifting all the unjust and illegal economic sanctions is essential and, in fact, given that Iran has carried out its obligations and has promised more transparency, the sanctions will no longer be justified. The United States’ sanctions epitomize its opposition to Iran’s industrial progress and advancement and a sign of breaking its promises and distancing itself from the negotiations’ rationale.” A few days later, Shamkhani declared that there is a national consensus regarding the nuclear negotiations.

Sixth, Reza Saraj, a security/intelligence official in the IRGC, is considered an important figure among the hardliners who have cracked down harshly on the dissidents. Right after the announcement of the Lausanne Accord, Saraj published an article on Fars News Agency website in which he not only defended the agreement, but also responded to its critics, while also admitting that there was an imbalance between Iran’s concessions and what it received in return. As he put it, “A decade ago the West was not willing to accept even a single centrifuge in Iran.” He emphasized that, “lifting all of the sanctions at once should be described with utter clarity in the joint plan of action for the comprehensive nuclear agreement, so that the Western side would not be able to shirk its responsibilities and obligations.”

So, what is going to happen in the coming months and years? Here are some important issues to consider:

First, control of the opposition: So far Khamenei has been able to control the opposition to the Lausanne Accord. In fact, by supporting the agreement, the military leaders have also stated their own expectations, which are also Khamenei’s. He has emphasized lifting the sanctions a short time after signing the final agreement, and not agreeing to any inspection of the military bases.

Second, expanding relations with the U.S.: President Obama seems bent on expanding relations with Iran after signing the final agreement, turning it into his most important foreign policy legacy. In a recent analysis I described how Khamenei has also sent a green light to the president regarding expanding relations, provided that the final agreement is an honorable one for Iran that would lead to removing all the sanctions. If that happens, the IRGC commanders will also endorse the agreement and its aftermath. When Zarif and Secretary of State John Kerry met in New York on April 27 as part of the Review of the Nuclear Non-Proliferation Treaty, they also discussed the situation in Yemen, which is another indication of more expanded contacts between the two nations. President Rouhani also stated on April 29 that, “Some people think that the government is interested only in resolving the nuclear dispute, whereas this represents the first step for resolving all the fundamental issues.”