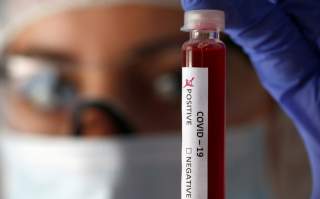 Dr. Scott Gottlieb, the former commissioner of the Food and Drug Administration, is a resident fellow at the American Enterprise Institute. He is a contributor to CNBC and serves on the board of a number of health technology and biotech companies.

Heilbrunn: Are there any existing drugs that you think could help address this crisis in the near term?

Gottlieb: When it comes to therapeutics, it’s a three-pronged strategy. The first is to develop a vaccine. That’s probably two years away. I think we have to be realistic and understand that it’s probably two years until we can get a vaccine. Maybe longer. We’ve never developed a vaccine to a coronavirus, there are certain things we don’t fully understand. There is a certain complexity involved in the kinds of vaccine platforms that we are trying to use now. It’s a very novel technology.

The second strategy is looking at antivirals that can work directly against the virus. That is really going to be a game of looking at what is on the shelf, what antiviral drugs currently exist that might be able to be repurposed to this task—and that’s drugs like Remdesivir, which is being developed by a company called Gilead. There are a number of other antiviral drugs that are being tested against coronavirus that have been shown to be active in vitro, meaning in test tubes, that are now being studied in vivo in animals as well as human trials.

The third leg of this strategy is to try to develop an antibody-based prophylactic. This would be an antibody that targets some feature of the virus that can be used as a prophylactic in people and, in this case, a lot of the people who are trying to develop these products are targeting what is called a spike protein. The spike protein is a part of the virus that the virus uses to gain entry into human cells. One of the companies that is pretty far ahead in developing this kind of product is Regeneron. Regeneron also was able to develop an antibody-based prophylactic that was successful in Ebola. They also had one that they were developing against MERS (Middle-East Respiratory Syndrome) that they had studied in large primates, I believe. This is a company that has shown they can do this and they are currently developing a product against coronavirus. The virtue of this kind of a product is that it would basically be a monthly injection, that you would use it for either frontline healthcare workers or patients who are vulnerable—nursing home patients or immunocompromised patients, maybe people who are going to chemotherapy, people with significant heart disease or lung dysfunction. You give it to them monthly and it would be a prophylactic that could protect them against coronavirus.

Heilbrunn: If we aren’t going to have a vaccine for the next two years, how could a therapeutic change the outcome of this pandemic?

Gottlieb: If we had the kind of prophylactic product I was describing, it would really change the contours of risk. My concern right now is that we are going to have a major epidemic now across the United States. There are different estimates of how long that is going to last, but most of the modeling shows that it is most likely to peak sometime in probably late April or early May. That is sort of the optimistic case. In seven to eight weeks the epidemic will peak. Then it will start to come down. By July, hopefully the epidemic will have coursed. There will be a sizable portion of the population who have gotten the infection so you’ll have what’s called herd immunity. In July and August, we’ll probably have sporadic outbreaks but you shouldn’t have epidemic spread. The fear is, and my concern is, that when you come back in September, you’re going to have major outbreaks and the risk of another epidemic going into the winter. I think the policymakers really need to focus on that risk. That’s a challenge because right now they are focused on the crisis. But they need to take steps right now to also be guarding against the risk in the fall. By September, it will be too late.

We should be investing in those therapeutics. There’s no reason we can’t have something like an antibody-based prophylactic. There’s no reason we can’t have repurposed an antiviral drug that currently exists for the purposes of targeting coronavirus. Now maybe it won’t be through regulatory approval, but you should potentially have enough clinical data to prove whether one of these compounds work and that you could use it on a mass scale. There are currently trials underway with Remdesivir. We are going to turn over the card on them in April. If they show clinical benefits, by the fall you could have mass production and that product available in a treatment protocol—where you are still continuing to collect data and study it, it’s not licensed, but you are providing it on a treatment basis in the context of some kind of study. You could have an antibody-based prophylactic potentially approved by the fall, that should be a relatively rapid development and scale up—if it works. And it should be fairly clear how to establish its safety profile.

Heilbrunn: Can you talk about the role of diagnostics both for patient care but also for disease surveillance?

Gottlieb: You are going to want two things. One is a point of care diagnostic. You’re going to want a diagnostic that you can deploy to doctor’s offices so that you can diagnose people really easily so that when you find people who have coronavirus, you can quarantine them. We’re not going to wait twenty-four to forty-eight hours for a diagnostic, it really needs to be in the doctor’s office. And there is no reason that is not attainable. That is something you should be able to develop within three months. We have all kinds of rapid diagnostics at doctor’s offices—the flu swab, which you’re probably familiar with.

The other thing you’re going to want is an extremely robust surveillance system. You’re going to want a system that basically looks at people who present with influenza-like illness but who test negative for the flu. And you then test their samples to see what they have. We currently do that. We have a surveillance system distributed throughout multiple cities and we take a certain number of samples—it’s a small amount—it’s not tens of thousands but thousands and we test them for other things to see what is circulating in the population. We also do that to try to have an early detection in case, like, a pandemic flu stream is circulating. But we don’t do it for this novel coronavirus and we don’t do it on a mass scale.

What you’re going to want by the fall is to really blow that out, do it at a mass scale, and obviously build out the capability to do it for coronavirus. Because this coronavirus is not really going to come and go. It’s going to be with us. And unless we have those kinds of tools available to us and this kind of surveillance system in place, this is going to change daily life in perpetuity until we have a vaccine. And that’s not sustainable. The kind of posture that the nation is in right now isn’t sustainable. And another major epidemic won’t be sustainable. So we need the tools to change the landscape for how we deal with this and people need to be really focused on that right now because I think we got caught a little flat-footed with this epidemic. We were not really anticipating that this would become an epidemic in the United States. Although there were people who felt that it would, there was not the kind of preparation, necessarily, that needed to happen two months ago to prepare for now. And you don’t want to be in a situation where it’s September and saying, “Gosh, I really wish we would have done some things differently in May and June so we have different tools and a different posture.”

Heilbrunn: So you’re saying potentially September could be even more dire than what we are experiencing now?

Gottlieb: Not necessarily, no. I actually think no because I think by September you are going to have a portion of the population which has been exposed to it. So you’re going to have some herd immunity. The ability for this to rapidly propagate and become epidemic again is going to be more limited—not impossible—but more limited. But there will still be the ability for this virus to cause sizable outbreaks. So even hundreds or thousands of cases are going to be disruptive if you have that kind of outbreak in the fall or the winter. And there is the potential for larger spread. Even though it’s diminished, there’s still the potential for larger spread. You don’t want this being a continual threat, you want to find a way to mitigate this so that we can deal with it. There are lots of viruses and bacteria that circulate, that are very dangerous, but we have developed tools for dealing with them, and they’ve become part of daily life. We know how to deal with them. Some people succumb to them but for the vast majority of the population, we are able to use effective therapeutics and effective diagnostics tools so we can mitigate the threat and life goes on. What I am saying is that we cannot keep the economy shut forever and we probably can’t sustain another epidemic or sizable outbreak of this.