The Next India-Pakistan Crisis Will Be Worse 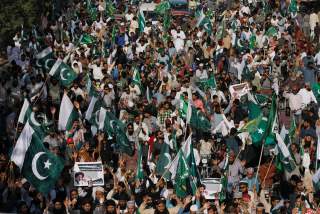 The last few days have been downright scary in South Asia.

India and Pakistan, the only two rivals in the world to be both neighbors and nuclear states, have suffered through their most serious crisis in nearly twenty years.

The crisis has featured multiple traumatic events that made escalation inevitable. Take the February 14 attack by Jaish-e-Mohammad, a Pakistan-based terror group, on Indian security personnel in India-administered Kashmir—one of the deadliest attacks on Indian forces in years. Consider India’s retaliatory strikes on Pakistan—launched not in Pakistan-administered Kashmir, but in Khyber-Pakhtunkhwa province, further away from the border. And witness Pakistan’s decision to respond with its own strikes on Indian targets, and its capture of an Indian Air Force pilot.

Recent days, fortunately, suggest that de-escalation is approaching. Pakistan decided relatively quickly to release the captured Indian pilot—a gesture that reduces the likelihood of, but does not rule out, any further Indian uses of force in the immediate term.

Eventually, this crisis will end. However, when it does, both countries will have to acknowledge an inconvenient truth: fundamental realities on the ground—those that most aggrieve each side— will not have changed.

First, the India-focused terrorists that New Delhi claims to have targeted in its strikes on Pakistan will continue to enjoy shelter from the Pakistani state. Islamabad will not have changed its policies toward them. On the contrary, in the aftermath of this crisis, an emboldened Islamabad—armed with a heightened awareness of its need to depend on assets that can push back against its Indian foe—may well embrace these actors more tightly.

Second, India’s position on the region of Kashmir it administers, which has long been claimed by Pakistan, will not have changed. New Delhi will still believe that there is nothing in dispute about the region, and that its status is settled and need not be renegotiated. And it will continue to use repressive tactics against local communities who despise the presence of the Indian state there.

Indian security forces could well intensify these tactics under the guise of counterterrorism; the militant who staged the attack in Kashmir last month was a local resident. Such measures would undoubtedly galvanize Kashmiris even more. The violent crackdowns that New Delhi may describe as counterterrorism will be—and already are—depicted by many Kashmiris and Pakistanis as Indian state terrorism.

In effect, after the crisis abates, India and Pakistan are likely to step up activities that sharpen each side’s core grievances—thereby paving the way for fresh tensions and a new crisis.

All this said, the crisis has yielded a new normal of sorts.

For the first time, both sides have signaled, as nuclear states, that they are willing and able to rain missiles down on each other’s territory, and in India’s case in areas well beyond the contested border.

There are positive takeaways here for both countries. New Delhi has telegraphed its willingness to act preemptively in areas beyond Pakistan-administered Kashmir when it feels threatened by Pakistan-based terrorism.

True, the details surrounding the Indian operation are murky; on-the-ground media reports (including from Al Jazeera and Reuters) suggest that Indian claims of more than 300 terrorists killed and large-scale destruction of terrorist facilities may be exaggerated.

Still, issues surrounding the targeting of the strike are less important than the geography: New Delhi has signaled it will no longer restrict itself to strikes along the border. And that can’t be a reassuring thought for Pakistan.

Meanwhile, Pakistan has demonstrated that while its conventional military power may not be as formidable as that of India’s, it is still perfectly capable of matching India’s own moves. In this regard, Pakistan has defied the naysayers in India and elsewhere who were skeptical that the Pakistanis would mount a military response to India’s operation. Islamabad has proven that it won’t be deterred if India resorts to a type of military action in Pakistan that hadn’t been deployed since the early 1970s, many years before either country went nuclear.

For these reasons, both Islamabad and New Delhi can claim victory and conclude the crisis was worth sweating through—even though fundamental realities about terrorism and Kashmir have not changed.

Still, at the end of the day, Pakistan and India will have merely given each other bloody noses, and otherwise emerged unscathed. This has some unsettling longer-term implications.

In effect, for India to have a greater chance of achieving the goals that couldn’t be achieved during the current crisis, it will need to escalate its tactics. If New Delhi wants to pressure Pakistan into rethinking its decision to provide support to India-focused terrorists, then it will need to turn to measures more muscular than a few airstrikes. Likewise, if Islamabad wants to pressure India into rethinking its policies in Kashmir, it too will need to turn to something more aggressive than a few airstrikes.

The upshot? With India and Pakistan having demonstrated they are comfortable engaging in increasingly provocative uses of military force under the nuclear umbrella, they will have an incentive in the future to go up a few more rungs on the escalatory ladder to try to achieve goals that couldn’t be achieved further down that ladder.

Regardless of whether they succeed or fail, this much is true: With both sides now willing to climb higher up the escalation ladder, a future nuclear exchange could become a far less remote prospect.

Image: Supporters of the Tehrik-e-Labaik Pakistan (TLP) Islamic political party chant slogans as they carry flags and signs during a protest against, what they call, Indian atrocities in Kashmir and to mark solidarity with Pakistan Army in Karachi, Pakistan February 24, 2019. REUTERS.