The Next Syria Showdown 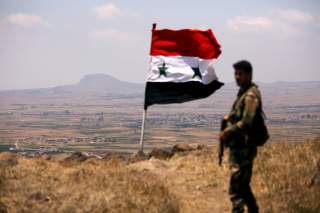 In the first week of August Russian Military Police began to establish eight observation points along the Golan heights overlooking the 1974 ceasefire line between Israel and Syria. It was a symbolic end to the fighting in southern Syria where the last rebel pocket in the south was easily defeated in the same place where protests first broke out in 2011 against the regime during the Arab Spring.

A month of fighting in July saw the Syrian regime return to the Jordanian border and the ceasefire line on the Golan. Most of the rebels agreed to reconciliation with the regime, an acceptance of being reincorporated into the Syrian state. Around ten thousand others were bussed north to Idlib province, a process of bussing and reconciliation that has become common in the last year of the war. The regime has gained strength, confidence and power over the last three years since Russia began to intervene in strength in Syria. Now the Syrian conflict is divided between three areas that are under the air power of three major coalitions. In the east is the U.S.-led coalition and its Syrian Democratic Forces partners, in the north Turkey and its Syrian rebel allies, and in the center and rest of Syria the regime is backed by Russia and Iran.

The Syrian civil war is over. The war now enters a new phase that will be marked by decisions in Ankara, Washington and Moscow. Hints of this change were already clear when Russia began talking about “de-escalation” zones and hosting talks in Astana with Iran and Turkey. Now those talks have matured and the remaining power vacuums that were held by independent rebel groups, such as in eastern Ghouta or southern Syria, have been filled by the regime. In addition ISIS areas have been reduced to around one percent of what they were. The ISIS pocket on the Golan, in Yarmouk and in the Syrian desert near the Iraqi border have been defeated. The Syrian Democratic Forces have launched the third phase of Operation Roundup in the Euphrates valley and will soon clear out that last hundred square kilometers ISIS holds.

The Syrian regime’s goal is clear. It wants to re-conquer all of Syria and its allies in Iran and Moscow agree that Syrian sovereignty must be restored. The timetable on how long it takes Damascus to get back its borders is the central question. “If the war isn’t over, the trajectory is clear,” former U.S. Ambassador Robert S. Ford said in an interview with the Middle East Center for Reporting and Analysis. He says Damascus will work to eject Turkish and American forces, but it’s unclear what role Moscow will play. “I cannot imagine that Russia is going to reject Assad’s efforts to put pressure on Turkey in Idlib,” he said. The Assad regime has to be careful not to provoke conflict with Turkey and achieve its goal over a long process.

If the Syrian regime’s view is clear, then the Turkish view on the long-term role in northern Syria is opaque. Turkey is investing in educational initiatives in Jarabulus, Afrin and al-Bab and it wants the millions of Syrian refugees in Turkey to return. Seventy-five thousand have gone home but Turkey, which says it has spent $30 billion on camps, hopes to see more. Will northern Syria become a kind of Northern Cyprus, or will the Syrian regime and Turkey find an accommodation. Already Damascus is preparing an offensive to chip away at Idlib province where Turkey has observation points. If Turkey intends to stay, then it will draw a red line somewhere.

Turkey’s intervention in Syria was only carried out in part to support the rebels. It was conducted in Jarabulus to check the advance of the People’s Protection Units (YPG) which Ankara accuses of being “terrorists” linked to the Kurdistan Workers Party (PKK). The YPG is one component of the SDF which is a partner of the United States anti-ISIS coalition. Turkey has been seriously fighting the PKK since a 2015 ceasefire broke down and Turkey has launched raids into Iraq to strike at the group. It has threatened to attack Manbij where the U.S. coalition is present alongside the SDF. U.S. Secretary of State Mike Pompeo and Ankara hammered out a road map in Manbij that has seen twenty-two independent patrols by the United States and Turkey near the city. According to the Coalition these patrols have gone well but it is unclear if rising tensions over the detained U.S. pastor Andrew Brunson in Turkey will cause a crises. Such a crises could destabilize Manbij. The important issue here is that Turkey’s role near Manbij is not just about supporting the rebels against the regime, it is about moving the SDF back across the Euphrates. If the United States were to leave eastern Syria, for instance, and the regime returned to eastern Syria, Turkey’s reason for staying in the north would be reduced.

“It’s going to be a longer, tougher fight,” U.S. Secretary of Defense James Mattis said on July 27 to press in Washington, referring to the battle with Islamic State in eastern Syria. “You don’t just leave it, and then ISIS comes back.” His comments dovetail with constant references to “stabilization” by anti-ISIS envoy Brett McGurk and others in the administration. The United States appears to think that Assad will also eventually leave or at least that the United States can hold up the rebuilding of western Syria until he does. Mattis indicated that additional money for rebuilding Syria would “await Assad’s leaving.” This means the United States is forecasting staying in eastern Syria for the near future.

With the United States staying there are several scenarios for what eastern Syria might look like. The first includes a gradual drawdown of U.S. and coalition forces as ISIS is defeated. With stabilization going well the SDF will continue negotiations with the Syrian regime that began with a visit of the SDF linked Syrian Democratic Council in July. The risk is that a new round of fighting might break out between Turkey and the SDF as the United States withdraws its air support and that the United States would be seen to be abandoning allies who helped defeat ISIS.

A second scenario is that the U.S. invests heavily in stabilization and drags out the anti-ISIS fight for several more years under the excuse that ISIS is not really defeated. This would put pressure for change on Damascus and would see the U.S. warning Turkey off any attacks on Manbij. It would mean a major investment in Raqqa and the development of a footprint of diplomatic staff, U.S. AID and other organizations rebuilding Syria. So far the United States has only carried out minimal efforts at reconstruction with many areas like Manbij managing themselves without support. But Raqqa and other areas require more investment. The Syrian regime would try to force the United States out by encouraging instability among Euphrates valley tribes. This is something the regime did to cause problems for the United States in Iraq.

A third option is a robust investment in an autonomous region in eastern Syria similar to what the United States did in northern Iraq after 1991 that led to the creation of the Kurdistan Regional Government. The United States already has open-ended commitments in places like Afghanistan and in dozens of countries around the world, particularly in Africa, where U.S. special forces and trainers are active helping to counter extremism. Former Ambassador Ford notes that the United States has been good at avoiding casualties in eastern Syria. But if that changes he says people will ask “what are we getting into?” And this speaks to the larger question of strategy. The United States has said it is fighting ISIS in eastern Syria. But Pompeo and Trump both articulated a robust program at rolling back Iranian influence in the region.

“Iran must withdraw all forces under Iranian command throughout the entirety of Syria,” Pompeo said in May.

U.S. forces in eastern Syria could help be a block against Iranian influence, a wedge between Iran’s influence in Iraq and its influence in Damascus. “Some people are telling Trump to leave forces there to counter Iran,” says Ford. But he’s skeptical. “The Trump administration is hoping the Russians will get them [Iran] out but the Russians won’t get them out.”

Washington faces a junction in Syria. The administration has been reticent to announce a new policy in eastern Syria. The U.S. role there is now unprecedented. The U.S. sent forces to Syria to fight ISIS, found remarkable allies and now finds itself helping to protect an area of a country. Washington is more comfortable working with governments than entities such as the SDF. This is made more complicated by the fact that Turkey, a historic ally, opposes the U.S. role. The United States also faces the difficulty of weighing the desires of the locals it works with and its larger policy. It saw how frayed this can be in northern Iraq where it spurned its allies in the Kurdistan region to work more closely with Baghdad. This, despite the fact that Baghdad’s major political parties are close to Tehran, which the current U.S. policy ostensibly opposes. Pragmatic and cynical voices will encourage the same approach to Turkey, working with Turkey even as Turkey drifts closer to Russia. Already the SDF is skeptical of the United States after watching Turkey takeover Afrin where the Kurdish YPG had been in control until January.