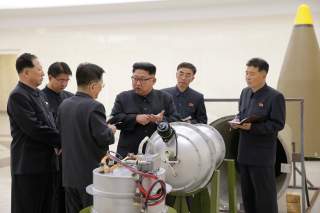 In comments recently delivered at the Foundation for Defense of Democracies, President Donald Trump’s National Security Adviser Herbert Raymond “H.R.” McMaster reaffirmed the administration’s objective of North Korean denuclearization, repeating that a posture of “accept and deter is unacceptable.” But as North Korea continues to view the possession of a stable nuclear capability as existentially crucial to its security, negotiated North Korean denuclearization appears to remain “non-negotiable.” Instead, the administration may be considering the preventive use of force to “[deny] North Korea from threatening the United States with a weapon.” This approach may target the Kim regime, the North’s nuclear and conventional deterrence forces, or both, according to different sources. Its costs, however, significantly outweigh the purported benefits. Not only would it pose tremendous technical challenges, but the intra-alliance tensions generated by a preventive strike posture would also exacerbate the ‘decoupling’ phenomenon. Of greatest concern is that an attempt to disarm or decapitate the Kim regime could precipitate a North Korean nuclear attack—the very event such a preventive strike would seek to prevent.

Intended to prevent North Korea from acquiring an operational nuclear capability, a U.S. preventive strike would likely rely on the sudden and rapid employment of a combination of standoff munitions, cyber warfare and special forces to disorient and disarm the North Korean regime. Though policymakers might consider several options for carrying out such an attack, the notion of a more limited, high-tech preventive approach—a simultaneous effort to surgically disarm North Korea’s nascent nuclear capabilities and incapacitate its regime—may offer an apparent quick-fix to an increasingly complex challenge. Here, a decapitation strategy, either targeting North Korean leadership directly or its command and control systems, would theoretically complement a conventional disarming strike, paralyzing North Korean leadership before it can organize an effective response and without significantly committing U.S. ground forces.

On first glance, this approach might paint a tempting picture. Paired with the neutralization of North Korean nuclearization program, decapitation strikes could ostensibly induce the strategic paralysis necessary to undermine North Korea’s ability to retaliate. Underlying this logic is the assumption that state leadership is necessary not just for basic governance, but for the prosecution of complex military operations. The concept of a decapitation strike appears especially compelling when threats are thought to be driven by the actions of individual leaders. With Kim Jong-Un widely perceived as a rogue and unpredictable “madman” at the trigger, a decapitation strike could eliminate the driving force of conflict, thereby allowing a new regime to take power that is either more amenable to denuclearization or more ‘rational’ in their fear of a follow-up U.S. decapitation strike. On the ground, North Korean military forces would be cut-off from strategic direction and disabled in their coordination of defense or retaliation against an attack.

Even under permissive conditions, such a strategy demands a dazzling military performance. Nothing short of virtuoso coordination between real-time intelligence and strike assets would suffice. Here, North Korea’s geography and the particulars of its regime pose tremendous operational difficulties for U.S. and allied forces. Existentially fearful of U.S.-led military strikes and assassination attempts (and keen observers of U.S. military efforts against Iraq, Serbia, and Libya), North Korea has spent decades organizing its military capabilities to ensure regime security, deploying networked tunnels and bunkers to conceal Kim Jong Un and withstand attempts to disable or disarm the regime. The efficacy of a decapitation strike in North Korea would be further limited by the political power of the Kim family, who occupy a deified position within North Korean culture. Consequently, even if the U.S. military were able to successfully incapacitate the regime, there is little to suggest that the following leadership or North Korean public would be more agreeable to U.S. demands.

The challenges of tracking and identifying enemy command and control targets are mirrored in the difficulties in disarming North Korea’s increasingly operational ballistic missile and nuclear capabilities. Though certain North Korean missile variants have been tested from the same location, many North Korean missiles are road-mobile, making them easy to conceal, transport between a range of launch-sites, or fire remotely by transporter-erector launchers (TELs). Capable of using ‘shoot and scoot’ tactics to fire missiles quickly before withdrawing into cover, North Korea poses concealment challenges similar to those experienced by U.S. forces when unsuccessfully hunting for Iraqi SCUD launchers during the 1991 Gulf War—only in the North Korean case, North Korean ballistic missiles are more numerous, sophisticated, and may be nuclear capable. The Pentagon recently confirmed this difficulty, suggesting that to secure North Korean nuclear weapons “with complete certainty” would require ground forces. Indeed, some question whether U.S. conventional capabilities could destroy these systems in sufficient quantities, warning that only a nuclear first-strike would decisively end the risk of a nuclear North Korea.

Beyond the significant technical hurdles, an attempted preventive strike against North Korea may incite the escalation dynamics it intends to prevent. To function effectively, such a strike must be conducted with the utmost secrecy, so as to catch North Korea unawares. While North Korea may be able to glean information of a possible U.S. military buildup from public sources, the primitive nature of its reconnaissance system serves only to heighten North Korean anxiety of an impending attack. For the North Korean leadership, U.S. public statements intimating a policy of regime change or planned military exercises on the Korean peninsula may well fuel fears of an imminent attack and strengthen further the hair-trigger posture of the North Korean military.

Indeed, North Korea may seek to preempt an attack or otherwise retaliate. This spiral from a sharp, limited strike to all-out war is easy to envision. North Korean doctrine is thought to call for “automatic, reciprocal violence” in an attempt to maintain escalation dominance. North Korea could exercise its long-held conventional deterrent against Seoul through a devastating artillery bombardment of the city. To counteract this threat, the United States would need to balance the need to find and eliminate the North Korean leadership or missile systems with the demanding task of eliminating North Korean artillery pieces along the mountainous DMZ. This would place intense requirements upon U.S. intelligence and strike assets, as well as an already limited munitions supply. In addition to exercising its conventional escalatory capabilities, the need to preempt an American preventive strike generates significant pressures upon North Korea’s nuclear doctrine. As North Korean has not yet perfected a survivable nuclear capability, some analysis argues that its nuclear doctrine calls for a “demonstration” strike against an American military base in the region, followed by an explicit threat to target the continental United States. Worse still, North Korea, seeing little to lose, may attempt to preemptively strike an allied or American city with a nuclear ballistic missile. Though some, including President Trump, hold high confidence in U.S. ballistic missile defense capabilities to sufficiently offset North Korea’s nuclear threat, this conviction nonetheless rests upon a relatively unproven technology that offers odds “as good as a coin toss.”

Finally, a preventive strike posture severely strains the trust undergirding U.S. alliance relationships in East Asia. To maintain operational secrecy, the United States could mask preparations for a preventive from the Japanese and South Korean governments. While this may seem to violate the “prior notification” requirement of the U.S.-Korea mutual defense treaty, recent evidence suggests that the United States may feel that it is not bound by an alliance ‘veto’ in considering whether to engage in a strike. Though the United States has publicly stated its intention to consult its South Korean and Japanese allies before any strike on North Korea, continued ambiguity over a potential alliance veto in the run-up to a strike only strengthens the perception that the United States is more interested in dealing with the aspects of the North Korean nuclear program that directly threaten the security of the lower forty-eight states than in reassuring nervous allies. The perception shared by South Korea and Japan might be that the United States is using their nations and people as a buffer to absorb the danger of the North Korean nuclear program before it can demonstrably reach American shores. Continued ambiguity over this preventive posture, let alone the launching a preventive strike without prior notification, could fray America’s East Asian alliances, decoupling the United States from its Japanese and South Korean partners and severely undermining America’s alliance commitments elsewhere.

When choosing between preparations for a preventive strike and maintaining intra-alliance trust, the correct choice is clear. America’s alliances in Asia, and the control of the sea and its precious shipping lanes they have afforded, bring immense wealth, prosperity, and stability to the region. Sacrificing the mutual trust built by years of painstaking alliance management for the likely incorrect and dangerous belief that America could eliminate North Korea’s nuclear weapons or command structure in a single stroke would be an abrogation of America’s duty to the international liberal system.