Nicolas Maduro Has Stripped Venezuela of Its Democratic Future 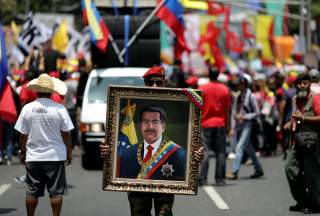 As on-again off-again negotiations for Venezuela’s future start up again in Norway, both the Maduro regime and the constitutional interim government seek a knockout blow that neither has yet been able to deliver. But the status quo is unsustainable; without a dramatic course correction Venezuela is headed for national collapse.

On January 23, 2019, Juan Guaido claimed the interim presidency according to Venezuela’s constitution. Nicolas Maduro’s term expired on January 10; his 2018 “re-election” was a deeply flawed, cynical manipulation of the voting process widely rejected by the international community including the Organization of American States. Over fifty nations now recognize Guaido as the legitimate, albeit temporary, leader. The coup de main was intended to be a May 1 uprising led by senior regime officials. They planned to force Maduro into exile and install Guiado to organize new elections. In the end, word leaked, the timeline was accelerated, and the plan was ultimately aborted.

Maduro maintains power but not constitutional or electoral legitimacy. He is moving against those thought to be insufficiently loyal and has also stepped up harassment of Guaido supporters, including national legislators, whom he wants to replace via early elections. The international community—including the United States, Europe, and the Lima Group—have come to understand that Maduro is more resilient than many had believed. The regime enjoys the support of various world authoritarians. Key elements, including the security forces, remain committed. Although that commitment is based less on ideology and more on extravagant corruption and criminal activities, including drug trafficking coupled with fear of reprisals. Recent polling suggests some 25 percent of the population may continue to support the regime.

Venezuela is the Western Hemisphere’s largest humanitarian crisis of the modern era; fully 10 percent of the population has departed. The country suffers from the world’s highest hyperinflation and the economy has shrunk by half. The health system is in collapse, food is scarce for a growing number of people, and Caracas is among the world’s most dangerous cities. None of this can be attributed to international sanctions, which until recently have only been levied on individuals. Nonetheless, newly levied sanctions on the energy and financial sectors are beginning to bite. Coupled with the regime’s continued mismanagement, this will cause economic and social conditions to deteriorate further. Yet as bad as things already are, worsening conditions will be unlikely to cause Maduro to vacate Miraflores Palace so long as he continues to have sufficient resources for the security forces and remains willing to sacrifice the Venezuelan people at the altar of his ideological and self-aggrandizing ambitions.

Options to restore the disrupted democratic path are limited. Multiple internationally-mediated negotiations have simply been used by the regime to purchase time, divide the opposition, and consolidate control. Norway may or may not be any different. But trust between the parties is nonexistent and without sufficient leverage Maduro will never offer concessions of value much less quit. The last remaining option might be a UN-led peace conference seeking to bring all interested parties including P5 members China and Russia to the table to lay out a framework for resolution. To have any hope of success, such an effort would require the personal leadership of the secretary general.

Meantime, Guaido and his supporters will continue efforts to encourage regime supporters to switch sides until critical mass is achieved and the security forces are strong enough to enforce the constitution. He has also suggested that the use of outside force might be appropriate, implying military action by the United States in conjunction, presumably, with regional allies. But under current conditions, with no casus belli, such actions are unlikely to achieve the intended result and may well make matters worse. Much of Latin America, including Venezuela’s neighbors, Brazil and Colombia, has rejected the use of force. More pragmatically, other compelling global issues and domestic U.S. politics also weigh against even limited military action by the United States.

Where does that leave Venezuela? Prospects are discouraging. A continued negative glide path is likely. In a worst-case scenario, given Venezuela’s vast uninhabited, often impassable expanses, its increasing numbers of disaffected military and security forces, and its traditionally restive Western states bordering Colombia and elsewhere, it is no longer unthinkable, absent a course correction, that the nation would cease to function as a political entity fully governed from Caracas. Much of the territory is already de facto run by paramilitaries, local chieftains, drug traffickers, illegal miners, and Colombian guerrillas enjoying cross-border safe haven. Should these strains intensify, then Venezuela’s woes will only increase, with a dramatically worse destabilizing impact on its neighbors, to say nothing of the Venezuelan people themselves.