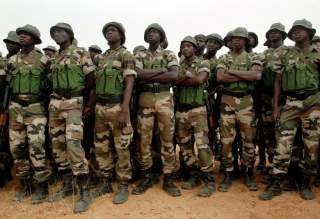 Now encapsulated in the hashtag #BringBackOurGirls, the global outrage surrounding Boko Haram, northern Nigeria’s most feared terrorist group, comes five years into a deadly insurgency that has taken the lives of 5,000 Nigerians and displaced more than a half million more. The catalyst for the recent outcry was the kidnapping of more than 200 girls from a school in Chibok last month. In a video released last week, Abubakar Shekau, Boko Haram’s fanatical leader, offered to free the schoolgirls in exchange for the release of prisoners held by the Nigerian government—a bargain that Nigeria is, understandably, not likely to take.

Far from assuring an anxious public at home and abroad, Nigerian President Goodluck Jonathan’s response to the crisis has been tepid and inconsistent at best. The Nigerian government seeks to cast Boko Haram as a temporary threat precipitated by a wave of global terrorism following 9/11. But the roots of violent extremism in northern Nigeria far predate Al Qaeda.

The problems that gave rise to Boko Haram are not new. They are structural and recurrent. Nigeria has, over the past several decades, witnessed several bouts of violent extremism, a symptom of years of economic deprivation, corruption, and government neglect.

Where does this story begin? Most historical analysis starts with Nigeria’s colonial period, when the British divided Nigeria into roughly three geocultural zones: a Muslim north for the Hausa, Fulani, and Kanuri peoples; a Christian and Muslim southwest inhabited mostly by Yoruba; and a predominantly Christian southeast most often associated with the Igbo. During this period, northern Nigeria enjoyed both economic prosperity and considerable political and cultural autonomy. Britain’s colonial practice of “indirect rule” left existing social structures in place and largely preserved the freedom to practice Islam.

That changed with Nigerian independence in 1960. Having lost its colonial sponsors, the north’s Fulani aristocracy ceded control over local affairs to a new and unpredictable federal government that connected the three geocultural spheres. Though three of Nigeria’s first four heads of state hailed from the north, a tumultuous decade of war and political instability gradually chipped away at their influence relative to the Yoruba and Igbo.

The discovery of oil in 1956 in Nigeria’s Igbo-majority southeast had an even greater effect. A booming oil sector precipitated the need for a centralized federal bureaucracy. Government corruption exploded as a result. As politicians jockeyed to capture the newfound wealth, they became increasingly unaccountable to their citizens. The agricultural sector—previously the lifeblood of the economy in the Muslim north—deteriorated, and a painful period of IMF structural adjustment in the 1980s only widened the gulf between the “haves” and the “have nots.”

Out of growing discontent in the north appeared a number of Islamic extremist organizations. In 1978, a reformist preacher named Abubakar Gumi inspired the creation of the “Izala” movement, which offered refuge in a rejectionist view of Islam. A radical Shiite campaign emerged after the Iranian Revolution in 1979. The most violent were the Yan Tatsine, whose rousing leader, Mohammed Marwa, inspired thousands to rise up against the existing political and religious order. The same grievances—economic deprivation, corruption, and an ineffectual federal state—carried over to 2002, when Mohammed Yusuf founded what would become Boko Haram. After Yusuf’s death in 2009, Boko Haram emerged violent and enraged, vowing to “make the country ungovernable, kill and eliminate irresponsible political leaders of all leanings, hunt and gun down those who oppose the rule of Sharia in Nigeria, and ensure that the infidel does not go unpunished.”

Of course, corruption, discontent and government neglect alone cannot explain why the vast majority of Nigeria’s 90 million Muslims reject the use of violence. Boko Haram itself bears responsibility for advancing a revisionist narrative that falsely portrays Islam as incompatible with democracy, Western culture, and modern science. These ruthless insurgents deserve the brunt of the blame for their campaign of terror in pursuit of a fundamentalist Islamic state.

But as Nigeria scholar John Paden has written, “fundamentalism, or going back to basics, is a worldwide phenomenon and a typical human response to uncertainty.” Disillusionment with a history of ineffective governance drives Nigeria’s Muslim population to seek alternative sources of protection and support. Though most Nigerians do not condone violence, Boko Haram’s vision of a return to the pre-colonial order—when the region was governed by Islamic law and perceived to be free of corruption—is sure to resonate with many.

Much of Boko Haram’s ideology, including its opposition to Western education and modern technology, may be irreconcilable. But fading confidence in the Nigerian government was avoidable, and it may not be too late to correct.

What can be done to end the latest threat in a cycle of extremist violence in Nigeria? The overwhelming use of force is potentially expedient, but unsustainable. Even if Boko Haram is neutralized, the roots of religious violence will remain.

Instead, as American President Dwight D. Eisenhower once said: “If a problem cannot be solved, enlarge it.” The first step toward eradicating Boko Haram is to recognize that violent extremism is larger than just a security problem. It is better understood as a product of decades of corruption, economic malaise, and failed governance. The only way to ensure long-term stability in northern Nigeria is to address these shortcomings.

Of course, the difficulty with expanding the scope of the problem is that there will be greater reluctance to act. To overcome this challenge, transformative change must start with the top, sanctioned and enforced by President Jonathan himself. Nigeria’s central bank governor Lamido Sanusi was recently dismissed for asking questions about why $20 billion in oil revenues had gone missing. Citizens and public officials should continue to ask questions, and the Nigerian government must begin to address them.

Moreover, today’s conflict has few immediate solutions. Developing a disciplined Nigerian military and police force capable of counterinsurgency will require years of training, and admitting that Nigeria needs help from the international community will demand that Jonathan’s government swallow a dose of humility. Regaining the trust of the Kanuri of northeast Nigeria—where Boko Haram draws much of its support—should start with a sustained effort to reform an entrenched culture of corruption.

One can hope that the schoolgirls kidnapped last month will soon be recovered and returned to their families. But once they return home, public pressure on President Jonathan’s government will gradually subside, even as the threat of Boko Haram remains. The Nigerian government could very well choose not to act. It may continue to lean on a strategy of sporadic military and legal pressure in a region distrustful of the nation’s security forces and justice system. But if the Nigerian government is serious about bringing sustainable peace to northern Nigeria, it will have to swallow reforms of a much broader scope. The onus ultimately falls on President Jonathan to rise to the challenge.

Andrew Wojtanik is a research assistant at the Harvard Kennedy School’s Belfer Center for Science and International Affairs.