Nixon, the Balance of Power, and Realism 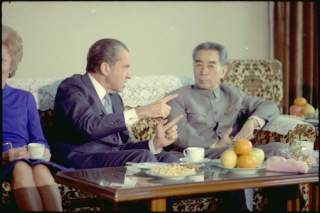 It’s been four decades since the resignation of Richard Nixon and two decades since his death, and he remains the “one president of whom it could never be said: ‘Richard, we hardly knew ye.’” He was, as Charles Krauthammer once remarked, “the most thoroughly psychoanalyzed president—perhaps public person—of our time.”

We all know Nixon, a man so driven by insecurities and hatreds that he abused his powers and resorted to dirty tricks and cover-ups. Yet he was also a man of high intelligence and shrewd instincts, whose foreign-policy judgments were widely respected at home and abroad. With Henry Kissinger, he opened relations with Communist China, he defused the Cold War by initiating détente and nuclear arms-control treaties with the Soviet Union, and he extricated the United States from Vietnam with minimum damage to its global standing.

It is also well known that Nixon, as president, was hardly the second coming of Woodrow Wilson. During his five-and-a-half-year tenure, he explicitly argued that the United States needed to recognize limits to power and he appealed to the classic conservative virtues of prudence, skepticism concerning sweeping ambition and the dangers of hubris.

What is less well known about Nixon, however, is that more than any other postwar president, including Jimmy Carter and Barack Obama, he recognized the perils of America’s global predominance. At a time of deep doubts and widespread uncertainty about America’s place in the emerging post-Vietnam world, it was Nixon who prepared his fellow citizens to adapt to decline in a more plural international environment and to adopt policies that would smooth the path to a new, more limited role in foreign affairs.

In July 1971, as Kissinger was secretly en route to Peking to complete plans for the presidential visit, Nixon predicted that that in fifteen years, America’s global hegemony would be replaced by a multipolar world. Far from embracing the classic Cold War vision of a world divided between the satanic East and godly West, Nixon described the world in classic balance-of-power terms: divided into emerging power blocs of the United States, Soviet Union, Western Europe, China and Japan, none of which was predominant. In an underreported speech in Kansas City on July 6, he declared:

The United States no longer is in the position of complete pre-eminence or predominance [and] that is not a bad thing. As a matter of fact, it can be a constructive thing. . . . Now we face a situation where four other potential economic superpowers have the capacity, have the kind of people . . . who can challenge us on every front.

A man who, as late as 1966, had championed a Pax Americana had within half a decade acknowledged that the American Century was drawing to a close. Americans, he urged, had to learn to adapt themselves to their new status as only one power in a five-centered multipolar international system. Though premature, Nixon acknowledged what no president since has been willing to admit—that we live in a pluralistic world and that U.S. power is past its apogee.

Nor were these remarks an isolated incident. Before he went to China in February 1972, he told Time magazine in language more reminiscent of Hans Morgenthau than Jack Kennedy: “I think it will be a safer world and a better world if we have a strong, healthy United States, Europe, Soviet Union, China, Japan, each balancing the other . . . an even balance.”

The duo of Nixon and Kissinger, instead of using the prism of American exceptionalism to look at the post-Vietnam world, envisaged it as an emerging multipolar system to be structured and regulated by a balance of power a la the 1815 Congress of Vienna, which was the subject of the latter’s doctoral dissertation. “It is when one nation becomes infinitely more powerful in relation to its potential competitor that the danger of war of arises.” (Compare Nixon’s rhetoric with that of Mitt Romney during the presidential campaign forty years later: “I will insist on a military so powerful no one would think of challenging it.”)

At the time, Nixon’s attempts to transform—or “Europeanize”—U.S. foreign policy were recognized by only a few figures, most notably Foreign Affairs editor James Chace, Paris-based scholar Edmund Stillman, Harvard professor Stanley Hoffman—and one Walter Lippmann. The distinguished columnist had spent much of the postwar era attacking Nixon’s red-baiting antics, but he had caught the significance of the new Nixon. As Lippmann told Ronald Steel in the Washington Post in March 1973:

[Nixon’s] role has been that of a man who had to liquidate, defuse, deflate the exaggerations of the romantic period of American imperialism and American inflation. Inflation of promises, inflation of hopes, the Great Society, American supremacy—all that had to be deflated because it was all beyond our power.”

Reading the article in his White House daily briefing, Nixon noted in the margins: “Wise observation.”

Nixon, a student of European history who greatly valued his relationships with Adenauer and de Gaulle, was no true believer in American exceptionalism. And his task of building a realpolitik world order was complicated by the fact that the historical experience of Europe bore little resemblance to how the American people had long viewed the world.

Deriving from the nation’s history, Americans had accepted as a given their own idealistic sense of exceptionalism. Based on a distinction between the founding moral principles of America and the corruption of the Old World of Europe, exceptionalism had explained the global predominance of America in terms of its moral and material uniqueness.

Americans had come to believe that the United States had been deliberately founded as a nation unlike any other and had a mission to regenerate the world and international relations in its own image. Nixon’s realism was ultimately incompatible with this culture. Not surprisingly, it met a backlash from both the left and the right.

Writing in Newsweek in 1970, liberal academic Eugene Genovese said: “Even those who speak for Realpolitik, including the most cynical and opportunist, have unwittingly contributed to the breakdown of an increasingly brittle and shoddy spiritual façade.” And writing in National Review in 1973, conservative pundit Richard Whalen argued: “Neither Nixon nor Kissinger, for all their undoubted qualities of intellect, has a sure intuitive sense of this country, its people and their guiding sentiments.”

Nixon’s realism was not the language of his Cold War predecessors, nor was it the language of his successors, including Carter and Obama, who have articulated a vision of America rooted in the idea of American exceptionalism. For many Americans, as veteran columnist Richard Cohen has put it in another context, Nixon’s realism was a dry, tasteless meal for the soul, no matter what its intellectual or practical virtues, and it sorely lacked Harry Truman’s pledge “to support free peoples…” or Franklin Roosevelt’s summons to a generation of Americans who had a “rendezvous with destiny.” By surrendering the tradition of American exceptionalism, perhaps Nixon only made his failure at home more likely.

And yet Nixon’s message resonates with today’s Americans, who are tired of the world and suffering from foreign-policy fatigue. Just as the political climate changed dramatically in the late 1960s, so too today, Americans are urging a radical change in foreign-policy course. A majority of Americans, according to a Pew poll in late 2013, think the “US should mind its own business internationally.” And only 30 percent of Americans, according to a Chicago Council of Global Affairs survey, would back military force in Ukraine if the Russians invaded the rest of the country.

Bloodied by costly interventions in Iraq and Afghanistan, damaged by high levels of debt and sluggish growth, shattered by a crisis of confidence, Americans are not yearning for an omnipotent America. Nor are they seeking to “go abroad in search of monsters to destroy,” which John Quincy Adams warned against. The only serious U.S. politician who appears to grasp these new realities is Senator Rand Paul. He would do well to look at his fellow Republican’s foreign-policy legacy.

Tom Switzer is editor of the American Review, published by the United States Studies Centre at the University of Sydney.