No Accountability for Iran’s Nuclear Violators 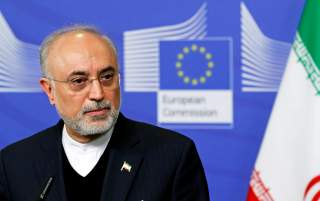 One year ago this January, Israeli agents broke into an undisclosed facility near Tehran that contained damning evidence of Iranian duplicity. While professing its pacific intentions, Iran carefully preserved the documentation from its long-denied nuclear weapons program. The Israeli raid and the information its agents collected provide the Trump administration with an opportunity—so far unrealized—to utilize the archives as part of its larger pressure strategy against Tehran. The first step towards doing so requires punishing the individuals named in the archive for their illicit nuclear activities.

While skeptics were quick to dismiss the contents of the archive as “nothing new,” patient analysis of those contents has shown that Iran was much closer to a nuclear weapons capability than previously understood.

Despite this revelation, European powers—with whom Israel had shared the archives—remained relatively muted as part of their larger effort to preserve the Joint Comprehensive Plan of Action (JCPOA) nuclear deal. Worse, the International Atomic Energy Agency (IAEA)—the organization responsible for monitoring Iran’s nuclear activities—reiterated that it “had no credible indications of activities in Iran relevant to the development of a nuclear explosive device after 2009.” Yet the very maintenance, concealment and possession of this material was relevant to the development of a nuclear weapon. Rather than engaging with the archival material, it was seemingly being written-off altogether.

This head-in-the-sand approach has become less and less tenable as the significance of the archives has become increasingly clear. Last fall, nuclear experts David Albright and Olli Heinonen and their coauthors—all of whom had extensive access to the archive—published a steady stream of reports detailing the policy decisions and technical strides Iran had made towards a nuclear weapons capability. One critical detail was a decision by Iran to produce “five explosive systems.” These document exploitation efforts must continue, as they inform the public debate and can be used by the administration to publicly urge the IAEA to aggressively look into the archive’s contents.

But that cannot be all. Washington should use the archives to support its maximum pressure campaign by using U.S. nonproliferation authorities to render judgment on and sanction those responsible.

Even if such nuclear weapons-related work was conducted prior to the JCPOA, Iran’s possession, curation, and concealment of the archive should trigger nonproliferation sanctions, which should be issued against every responsible person and entity. This should include Iran’s Atomic Energy Organization (AEOI)—which has operational and regulatory control over Iran’s nuclear program, including for nuclear research and development. In November 2018, the AEOI was re-designated by the U.S. Treasury Department as part of the re-imposition of sanctions suspended under the JCPOA. However, the designation contained no new information related to the AEOI’s role in the maintenance of Iran’s nuclear archive. Adding this information would demonstrate Iran’s continued violation of international norms related to nuclear nonproliferation. Perhaps most significant, it would be the first new designation of Iranian entities since the JCPOA for explicitly nuclear weapons activities.

Another concern is the background of those whose names appear in the archives. According to the latest report by Albright, Heinonen, and their coauthors Andrea Stricker and Frank Pabian, in February 2002, an Amir Hajizadeh “signed a contract to build a large, secret underground nuclear tunnel complex” as part of a project tasked “with developing and building nuclear warheads for ballistic missiles.” Hajizadeh signed the aforementioned contract as a representative of the Persian acronym for the IRGC Aerospace Force (IRGC-AF), the entity overseeing Iran’s ballistic missile arsenal. Given this connection, it is highly likely that this is Amir Ali Hajizadeh, who is now a Brigadier General and was appointed by Iran’s Supreme Leader Ali Khamenei to command the Guard Corps’ Aerospace Force in October 2009.

Surprisingly, despite designating the IRGC-AF in 2010 and Hajizadeh’s predecessor in 2007, the Treasury Department is yet to sanction Hajizadeh. In addition to his presence in the atomic archives, Hajizadeh has been the public face of Iran’s ballistic missile drive for almost a decade, commenting on everything from testing to military operations, as well as missile range and accuracy. But his connection to the regime’s interest in a missile force is much older, and he has bragged about being part of a team of Iranians who procured missile technology from North Korea during the 1980-1988 Iran-Iraq War. As a reminder, Iran’s ballistic missile arsenal contains multiple nuclear-capable platforms and, according to the U.S. Director of National Intelligence, is the biggest in the Middle East. Hajizadeh was designated by the European Union in 2012—and remains designated by the EU until 2023 pursuant to the JCPOA’s implementation timeline. The atomic archives offer the United States an opportunity to update its sanctions regime as well as better coordinate with its trans-Atlantic partners.

There is ample precedent to justify the designation of an individual like Hajizadeh, or anyone else found to have furnished, concealed, or otherwise possessed the archives. Executive Order 13382 of June 2005 has been the preferred mechanism of successive administrations for nonproliferation sanctions designations. The order itself is very broad. It provides the administration the ability to designate weapons of mass destruction proliferators and their supporters that “have engaged, or attempted to engage, in activities or transactions that have materially contributed to, or pose a risk of materially contributing to, the proliferation of weapons of mass destruction or their means of delivery (including missiles capable of delivering such weapons), including any efforts to manufacture, acquire, possess, develop, transport, transfer or use such items.” The continued possession and concealment of a nuclear weapons archive should trigger new nuclear-related designations.

The retention of both the infrastructure and knowledge necessary to effectively restart their military nuclear program qualifies as “activities” that “materially contribute to, or pose a risk of materially contributing to” future Iranian efforts to acquire a nuclear weapons capability, or a weapon itself. As does the promotion of key personnel as Hajizadeh, who remains intimately involved in Iran’s attempt to produce and test delivery vehicles for such weapons.

The extensive amount of equipment, material, software, and other information found in the archive—including blueprints, spreadsheets, charts, photos, and videos—clearly demonstrates the scale of Iran’s efforts to acquire a nuclear weapons capability, and in fact, a nuclear weapon itself. That Iran believed it was necessary to preserve this information in an extensive warehouse reinforces concerns that it has never abandoned its ambitions to develop nuclear weapons. The retention of the archive is an indicator of future Iranian intentions, namely, the activities to which Tehran will return when the JCPOA or any other follow-on deal’s restrictions expire.

New nuclear-related designations by the United States would be an important first step in acting on the information from the archive seized over one year ago.

Matthew Zweig, a former Senior Professional Staff Member at the House Foreign Affairs Committee, is a Senior Fellow at the Foundation for Defense of Democracies (FDD).

Behnam Ben Taleblu is a senior fellow focusing on Iran at FDD who has aided efforts to translate portions of the nuclear archive.