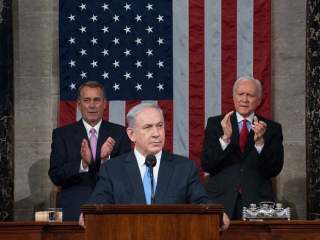 In a recent article for the National Interest titled “Can Washington Separate Its Iran Policy From Israel?”, National Iranian American Council president Trita Parsi writes that, “for many on Capitol Hill, the reality is that Iran is primarily viewed through an Israeli lens.” Parsi refers to this as the “Israelization” of America's Iran policy. From this assertion, a number of others follow regarding the impact of Israel and the American Israel Public Affairs Committee (AIPAC) on America's Iran policy over the past years. These assertions require a response.

First, Parsi claims that when it comes to Israel, Iran had been “pursuing more moderate policies in the 1990’s compared to the previous decade.”

A closer look at some of the policies that the Iranian regime followed in that decade shows the opposite. In fact, Iran was following more aggressive policies towards Israel in the 1990s than the 1980s.

First and foremost, in the 1990s, Iran expanded the number of anti-Israel terror groups that it supported. In the 1980s, Iran financially supported the Palestinian Islamic Jihad (PIJ) and Hezbollah; Iran also supported Hezbollah militarily. In the next decade, it added Hamas to the list. In 1991, Hamas opened an office in Tehran. In the same year, Iran and Hamas formed an alliance against the Madrid peace talks. In 1994, Iran started to financially back Hamas, to the tune of millions of dollars, joining Syria as one of the few foreign states that financially supported this group.

In the 1990s, both Hamas and PIJ took part in dozens of operations targeting both Israeli civilians and military personnel on Israeli soil. As a financial backer of both Hamas and PIJ, Iran became a stakeholder in an unprecedented number of attacks against Israelis on Israeli soil, which caused far higher casualties in the 1990s than in the preceding decade. Furthermore, Hezbollah, Iran's main ally and proxy in Lebanon, spent the decade expanding its attacks against Israeli targets abroad. These manifested themselves in two major terrorist attacks that took place in Argentina. One attack was against Israel's embassy in Buenos Aires in 1992, in which twenty-nine people died and 242 people were wounded. This attack came after Israel's assassination of Hezbollah Chief Abbas Musawi in Lebanon in February 1992 (his wife and son were also killed as a result of the attack). The other terror attack was the bombing of the Jewish Center in Buenos Aires in 1994, in which eighty-five people were killed and many were wounded.

Parsi also claims that one of the main reasons why Israel and AIPAC's attitude towards Iran began to shift dramatically in the 1990s was because “Rabin felt that another threat needed to be looming in the horizon,” a threat which he could use to sell the peace process with Arafat at home in Israel.

Did Yitzhak Rabin “need” another threat to be looming on the horizon to sell the Oslo deal at home, as Parsi claims? Oxford Dictionaries defines “need” as to “Require (something) because it is essential or very important rather than just desirable.”

A closer look shows that in fact the last thing Rabin “needed” to sell the Palestinian peace deal at home was the Iranian threat manifested in financial and political support for Hamas and PIJ. These two groups were both against the peace process and Israel's existence. More importantly, as mentioned, they carried out numerous suicide attacks and shootings in the 1990s. These attacks made it far more difficult for Rabin to sell his deal with Arafat at home. In fact, they raised political costs for Rabin and the Labor Party. The issue of security was of paramount importance to Israeli voters, and these attacks, a number of which occurred during the implementation of the Oslo peace talks dramatically diminished their sense of security. The Labor Party's rival Likud, headed by Benjamin Netanyahu, used this to their advantage. They started a massive TV, radio and newspaper campaign with the key slogan, “Israel wants a secure peace.” As the elections drew closer, there was a spike in the number of suicide bombings, which eroded Shimon Peres's double-digit lead in the polls. He ultimately lost by a small margin to Netanyahu.

Parsi writes that, over the last two years “for many on Capitol Hill, the reality is that Iran is primarily viewed through an Israeli lens.” He goes on to state, “This will be a major problem for President Obama, and for subsequent administrations seeking to sustain the nuclear deal with Iran.”

Israel, through AIPAC and sometimes without it (such as when Netanyahu decided to give a speech to the U.S. Congress in 2015), has tried to influence U.S. policy on Iran. AIPAC has spent millions of dollars to achieve this goal. But to claim that Congress has primarily seen Iran “through an Israeli lens” over the last two years is highly questionable.

There is also the impact of Iranian regime policy on U.S.-Iran relations, which on many occasions has created far more enemies for Iran on Capitol Hill than AIPAC could. This includes the 1979 takeover of the American embassy in Tehran and Hezbollah’s attacks on a U.S. Marine barracks in 1983, in which 241 U.S. service personnel were killed. Iran-backed groups in Iraq were reportedly responsible for the deaths of more than 1,000 U.S. soldiers following the American-led invasion of Iraq. As recently as in 2011, the Iranian regime was reportedly planning to blow up a restaurant in the middle of Washington, D.C., in order to assassinate the Saudi ambassador—an attack which would have killed many innocent people.

The United States has certainly made its own mistakes with Iran. Just to name a few, there was the morally repugnant decision by the U.S. to stay quiet, and even help Saddam, while he was using chemical weapons during the Iran-Iraq war. It also took the United States eight long years before it paid compensation to the families of the victims of Iran Air Flight 655, which the United States accidentally shot down in 1988.

Then there is the impact of Iran's domestic politics on its U.S. policies. An Iranian-American dual citizen, Siamak Namazi, was arrested after the recent nuclear deal that many had hoped would moderate Iran's policies. This, alongside hostile statements towards the United States by the supreme leader after the deal, send a strong signal to America that despite Obama's numerous overtures, Iran's powerful hardliners don't want relations with the United States to improve.

There is also Saudi Arabia, which has serious differences with Iran and has tried to pressure the U.S. to attack Iran's nuclear program.

One could say that Iran is viewed partially through Israel's concerns in Capitol Hill. To say that on Capitol Hill Iran is viewed “primarily” through Israeli lenses is saying that Israel's influence is greater than the sum of all other factors which influence how U.S. lawmakers have viewed the Iranian regime. These are factors such as U.S. political polarization, domestic Iranian politics and Iran’s tortured relationship with America, as well as the role of the Saudis. This is a questionable claim to make as it ignores a complex relationship with numerous nuances.

The deal with Iran has been settled, against the best efforts of AIPAC and Netanyahu. The major problem for President Obama, and for subsequent administrations seeking to sustain the nuclear deal with Iran, is not the “Israelization” of America's Iran policy as Parsi claims. Instead, it will be whether Iran and the P5+1 are able to keep and enforce the deal. If Netanyahu and AIPAC could not stop the deal while it was being negotiated, a stage which was far more susceptible to pressure than the post-deal period, they will not be able to stop it after implementation, unless Iran or the P5+1 fail in their commitments.

Parsi refers to Iranian presidents such as Rafsanjani and Rouhani in his article, but he makes no mention of Iran's Holocaust-denying Supreme Leader Ayatollah Ali Khamenei in his entire article. The supreme leader has the last word on Israel-Palestine issues, just as he had the last word on Iran's nuclear program. To date, he has not stopped calling for the elimination of the state of Israel. These days he is doing it in English, in case there were any doubts.

Meir Javedanfar is an Iranian-Israeli researcher and lecturer. He is a senior research fellow at the IDC Herzliya's Institute for Policy and Strategy (IPS) and at the Ezri Center for Iran and Persian Gulf Studies at the University of Haifa. Follow him on Twitter: @MeirJa.