No, China Is Not as Strong as It Seems 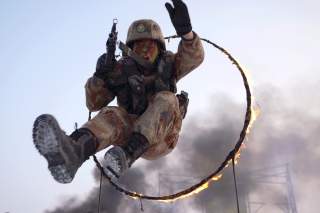 American opinion has moved away from its once-benign view of China. That older view, still favored by many business people, held that a prosperous China would threaten its neighbors less than a poor China, and anyway would offer the United States great economic advantages. Accordingly, this view recommended that the West engage China in a friendly way and accommodate Beijing as much as possible. The newer view has responded to overwhelming evidence that Chinese development is far from benign, that China flaunts common trade practices, steals technological secrets on a huge scale and spies outrageously. Moreover, this new view contends that Beijing acts aggressively in Asia, seems to have set itself on a thinly-veiled imperialist project that it calls the “Belt and Road,” and shows no regard for human rights in Hong Kong and—still more outrageously—in its Xinjiang region. This new view frequently paints China as a dangerous economic, military, and diplomatic juggernaut, so unstoppable, in fact, that the United States, short of a disastrous military confrontation, has little choice but to engage China in disarming ways and accommodate it where it can.

While this new perspective strangely lands on pretty much the same advice as the older more benign businessman’s take, it would be a mistake to view China in this way. To be sure, it is duplicitous and aggressive, and it presents a formidable economic, military, and diplomatic challenge. But it is far from irresistible, as some seem to believe. On the contrary, China suffers from a number of economic vulnerabilities and weaknesses that will impede its ambitions. The country, for one, has little chance of returning to its former, stellar rates of economic growth. Especially in light of the trade war with the United States, China’s dependence on exports no longer looks like the winning strategy it once did. Worse, Beijing’s top-down approach to economic management will become increasingly ineffective now that China has passed onto a more advanced stage of development. Moreover, failure in Hong Kong will further limit the country’s economic potential by choking off the conduit for much of its investment capital, while over the longer run, China’s aging demographics will constrain growth and cause financial strains. One need not forecast economic collapse, which in any case is unlikely, to see that China is far from the irresistible dragon described frequently by the Western media.

Trump’s trade war with Beijing has highlighted some of China’s more immediate weaknesses. It has become increasingly clear that Beijing, by making exports the engine of growth, has put its economy at the mercy of foreigners. Before this dispute began, the United States absorbed fully one-quarter of China’s exports. Since foreign sales accounted for some 20 percent of China’s gross domestic product (GDP), fully 5 percent of its entire economy was vulnerable to trade with the United States. In contrast, only some 12 percent of the U.S. economy depended on exports, and China sales amounted only to some 8 percent of that figure, leaving only some 1 percent of the U.S. economy vulnerable to China. As Trump’s tariffs squeezed a relatively large part of China’s economy, Beijing tried to bring similar pain to the United States with tit-for-tat tariff increases, but, of course, China bought too little from America to make that work. Making matters worse for Beijing, some 30 percent of its imports from the United States are components for Chinese assembled products that the country then exports—mostly computers and smartphones. Beijing could hardly impose tariffs on these goods.

China’s economy has suffered accordingly. Businesses have decamped their home country for other locations, mostly elsewhere in Asia, where the Trump tariffs do not apply. The loss of business has hurt not just exports but also domestic Chinese sales. Official figures issued by the Beijing government have long been held as suspiciously optimistic, but other measures show a troubled economic situation. Independent data on auto sales show a steep decline, by as much as 50 percent in some regions. Parcel deliveries in 2019 have run 2 percent behind previous years’ levels and that understates the drop in overall sales since e-commerce otherwise makes up a larger proportion of all retail sales. Furthermore, China’s employment growth has also slowed. Though official figures still show a relatively robust situation with unemployment at about 4 percent of the labor force, a survey of want ads shows a 20 percent drop in technology positions. Even optimistically biased official GDP statistics show real growth slowing to about 6 percent a year, the worst growth rate in decades. China’s devaluation of the yuan has helped sustain sales in America by reducing the dollar price of Chinese products, but it has also limited the dollar return to Chinese producers who effectively wind up paying the Trump tariffs for their American buyers.

China has deeper problems than its disadvantages in this trade standoff. Its entire development model is flawed. Using low wages to orient its economy toward exports has allowed rapid growth, as it did for Japan in the decades following World War II. This model has indeed allowed China to steal productive power from Europe and America, as innumerable commentaries have described and as Japan did decades ago. But, as is now fully evident, the approach has also left Chinese prosperity highly vulnerable to foreign actions over which Beijing has no control. True, a more balanced approach to development, one that cultivated a larger consumer sector and that promoted investment spending on more than just infrastructure and production for export, might have slowed China’s growth and let foreign producers sell more products in China. However, a balanced policy would also have left the Chinese economy less vulnerable to the Trump White House and by extension decisions yet to be taken in London, Berlin, Tokyo, and New Delhi.

Additionally, China is not nearly as strong financially as some Western commentaries suggest. A popular line spreads fear that Beijing might sell its huge holdings of U.S. government debt and so disrupt America’s financial system. Yet, since China holds only some 5 percent of the outstanding debt of the United States, Beijing would seem to lack the resources to cause such havoc. Five percent is a large chunk of the total but far from enough to overwhelm a financial system. Even if Beijing were to try, it would inflict more pain on itself than on the United States. None can doubt that if Beijing sold its U.S. bond holdings suddenly, bond prices would fall and accordingly interest rates in the United States would rise. But unless Beijing’s action created a panic, which is unlikely, the pressure on U.S. markets would ease as soon as Beijing sold all it had. Then, prices and interest rates would head back to their earlier levels. In other words, Beijing would have incurred losses and at the same time giving others the chance to acquire the bonds at bargain prices—a winning strategy for these others, perhaps, but not for Beijing.

Hong Kong’s troubles add yet another dimension to Beijing’s financial vulnerability. Aside from territorial ambition and national solidarity, Beijing wanted Hong Kong for two reasons. First, Hong Kong’s wealth would implicitly offer the average Chinese a promise in the existing system. Second, and more immediately important, Hong Kong offers global connections and the human capital to use them—things China otherwise lacks. China’s banks may rate among the largest in the world but they have neither the expertise nor the investment banking connections of Hong Kong. Rebellion in the city’s population has threatened both these purposes. At the same time, Beijing faces unaccustomed constraints in how it can handle the matter. Should China’s leadership play too rough, carrying out a Tiananmen Square redux for instance—or worse, the horrific tactics Beijing has employed in Xinjiang—they would destroy that promise of wealth for their people and also convince the worlds investment bankers, brokers, and traders to depart, depriving China of this critical financial center. Many financial firms have already begun to transfer their operations to Singapore. Beijing may yet decide that stamping out the resistance is worth such a huge cost, but either way, the Hong Kong matter has weakened China.

Finally, then there are China’s aging demographics, which further impair Beijing’s ambition of dominance. For decades the Chinese government imposed a law under which families were allowed only one child. The country’s leadership did this out of concern that population growth might outstrip economic resources to feed, clothe, and house all those people. What it has done, however, is slow the entry of young workers into the country’s labor force. This is because since the One Child policy was adopted, growing prosperity in China and medical advances have increased life expectancy in the large generation born before the one-child rule. As a result, China today faces a huge overhang of retirees just as the entry of young workers to support that elderly population has slowed.

This demographic pressure has yet to bite, but it will in time and irresistibly so. According to United Nations figures, China’s working-age population will decline from some 70 percent of the total population today to 60 percent by 2030 and 57 percent by 2040. The number of workers available to support each retiree will drop from about 8.5 today to only 3 by 2030 and to barely over 2 by 2040. This shortage of workers will limit the pace of China’s economic growth by imposing a constraint on a crucial economic input in ways that robotics and AI can only partly remedy. The shortage of working taxpayers relative to the dependent retired population will strain China’s public finances even though that country is far less generous to its elderly than are the West and Japan. Still more, the relative labor shortage will push up Chinese wages, stealing from that economy a key basis on which it has supported its export-oriented growth strategy. Recently, Beijing rescinded its one-child policy and now allows two per family. Even if Chinese families respond quickly to this new freedom to build a family, it would take some 20 years before the adults of that effort flowed into the workforce, a long time to wait for a nation bent on world dominance.