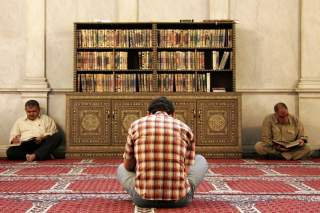 During the recent escalation of violence in Nagorno-Karabakh, the neutral and discreet position of Russian officials drastically diverged from the position of some major Russian media outlets. Azerbaijan has confronted a full range of slanderous inventions and assault from a variety of specters of Russian media, policy community and experts. Moreover, popular Russian political TV shows have witnessed fierce debates, during which Baku has been accused of conspiring with the West and Turkey against Armenia.

Among many ridiculous accusations, there have been claims about ISIS involvement on the Azerbaijani side in the recent escalation, which, it soon became clear, was a deliberate and systematic effort to create a new propaganda discourse.

For example, authors in the prominent journal Russia in Global Affairs suggested that it is expedient to collect the database of evidences on the possible involvement of ISIS fighters in the conflict and to deliver them the cochairs of the OSCE. Commenting on this piece, Azerbaijani MP Rasim Musabayov noted that these attempts are merely laying the groundwork of justification to intervene in the region.

A month before the escalation, in a March 4 interview, the deputy director of the Russian Institute of Strategic Studies (RISS), Grigory Tischenko, noted that after a defeat in Syria, Turkey could deploy ISIS to Karabakh. Interestingly, the same interview was reposted on the RISS website on April 11. On April 4, Russia’s LifeNews TV channel, citing unidentified “military sources,” reported that an ISIS unit of fifty to seventy fighters of Azerbaijani descent had left Raqqa for Karabakh. The same news was quoted, multiplied and disseminated by huge number of internet sources in Russian and English.

However, neither Russian nor Armenian media have delivered any evidence proving ISIS’s participation in the conflict. Nevertheless, since deliberately invented background information already exists, more convincing “evidence” can also be fabricated on request at any time.

Interestingly, along with Russian and Armenian media, some Iranian internet sources, especially those objecting to Azerbaijan's relations with Saudi Arabia and the West, also started to spread alleged information about Azerbaijani officials’ connection with ISIS.

Unfortunately, observing comments and discussions on social networks, we see that the dissemination of this kind of information misled not only Armenian readers, but also some Russian and Western ones.

Probably, one must have an extremely rich imagination to assert that ISIS will fight in Karabakh. First, Azerbaijan is a secular country with a Shia majority, while ISIS calls Shia infidels and wages war against Shia communities in Iraq and Syria. Second, suffice it to say that Azerbaijan is an old U.S. partner in the fields of fighting terrorism and regional security. Furthermore, advocates of ISIS and all other terrorist groups are a consistent target of Azerbaijan’s law enforcement and security services.

Besides that, ISIS rejects the very notion of the nation-state and all symbols of nationalism. It considers all Muslim states that are members of the UN and recognize contemporary international law as illegitimate and “apostate.”

In addition, according to jihadi ideology, one who fights for a nation-state and not for the establishment of a caliphate and sharia law, if killed, would not become a martyr (shahid); therefore his war does not constitute jihad. Islamic State’s leader Abu Bakr al-Baghdadi, and its chief ideologue Abu Muhammad al-Adnani, have been never tired of denouncing the project of the nation-state and everything related to it: democracy, parliaments, constitutions, national borders and so on.

In Syria, ISIS is fighting all groups that recognize the national borders of Syria and represent themselves as members of the secular and national opposition. ISIS designates all units of the Free Syrian Army and Syrian political opposition as apostates because they reject the idea of ​​a global caliphate, and collaborate with Muslim national states such as Turkey, Qatar and Saudi Arabia. Moreover, ISIS even wages war on “Islamist” factions (such as Ahrar al-Sham and Jaish al-Islam) that also want to establish a sharia system but recognize the nation-state and limit their Islamist projects to the borders of Syria. Even the Taliban was stigmatized by ISIS for not operating outside the modern-day borders of Afghanistan. Furthermore, ISIS justifies its war with Jabhat al-Nusra (Al Qaeda’s branch in Syria) by arguing that Nusra cooperates with the nationalist groups that fight under the banner of the secular Syrian flag.

Thus, it is highly unlikely that the largest jihadist organization, which rejects and confronts nationalism in all its forms, will fight for the territorial integrity of a secular republic with a Shia majority where Jews, Christians and atheists serve together in the Army. The authors of this piece wonder just how some Russian and Armenian experts imagine ISIS fighters sharing the front line with Azerbaijani Jews and Kurds who, during the escalation, along with other ethnic minorities, declared that they would fight for the territorial integrity of Azerbaijan. It is also very difficult to imagine how ISIS would convince jihadists to fight for Azerbaijan, which is trying to return Karabakh to its secular jurisdiction, not under a jihadi interpretation of sharia law.

It is clear that ISIS is a transnational, cross-border terrorist organization that absorbs radicals from all nationalities and challenges the authority of the nation-state. Interestingly, the conflict and enmity between Azerbaijanis and Armenians does not prevent representatives of both ethnic groups to be a part of ISIS’s “transnational brotherhood”; along with Azerbaijani, American and European fighters, there are also ethnically Christian Armenians who embraced the jihadi ideology and joined ISIS.

Taking into account the aforementioned points, the claims of ISIS’s participation in the escalation has neither a logical explanation nor any hard evidence; any facts of brutality on the battlefield cannot be necessarily translated to evidence for such claims. As the analyst Didier Chaudet recently pointed out, the fight against international jihadism is too serious and dangerous to make it a subject of manipulation in geopolitical games.