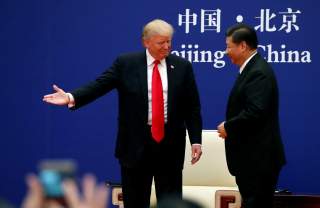 “People’s war.” That’s the Communist Party’s new term for the trade dispute with the United States.

The Global Times, the party’s nationalist tabloid, used that phrase on the May 13, but China’s leaders obviously approved of the rhetorical escalation. Both People’s Daily, the self-described “mouthpiece” of China’s ruling organization, and the official Xinhua News Agency carried the piece to wider audiences.

There seems to be a mismatch in perceptions. President Donald Trump, in comments to reporters on Tuesday, characterized the trade disagreement this way: “We’re having a little squabble with China.”

Trump was calming jittery markets. The party, on the other hand, was inflaming passions. The stoking of emotions—“people’s war” suggests America is an enemy of all Chinese—suggests a trade agreement between the planet’s two largest economies is not in the cards anytime soon.

For months, market participants outside China, buying into the persistent cheerleading of Treasury Secretary Steven Mnuchin, assumed the two giants would reach a trade pact this spring. Most observers ignored, among other things, internal Chinese factors pushing Beijing away from agreement with the United States.

Outside China’s tight political circles, there is no consensus as to what these factors are, but there are unmistakable signs of either disunity or dysfunction, in either case something wrong at the heart of China’s political system.

If there were nothing wrong, then China would not have at the last minute withdrawn commitments it made to lead negotiators Mnuchin and U.S. Trade Representative Robert Lighthizer.

As is now known, the Chinese team on the May 3 returned to the United States the draft 150-page trade agreement without including concessions that Vice Premier Liu He, the head of the Chinese team, had previously extended.

Beijing has since denied it had retracted the commitments, but this contention does not stand up. If nothing else, then something the Chinese did obviously rile Trump, who throughout the months-long negotiations promoted the appearance of progress. After China’s return of the draft trade deal, Trump publicly complained of Chinese attempts to “renegotiate,” starting with his much-discussed May 5 tweet.

Some people think Liu’s sudden across-the-board withdrawal of commitments is a sign of ruler Xi Jinping’s basic strength. The Wall Street Journal reported that he withdrew the commitments because he thought he could press the advantage. The Chinese leader interpreted President Trump’s “hectoring” of the Federal Reserve as an indication the U.S. economy was “more fragile” than he publicly “claimed.”

This reporting does not seem credible. For one thing, the U.S. economy looks vibrant. Moreover, this theory assumes Xi wanted a deal. Yet the Chinese leader had to know that pulling the commitment at a late moment would infuriate both Trump and Lighthizer and delegitimize the China-friendly Mnuchin, making unattainable any advantage he might hope to get with the bold maneuver.

In fact, Xi’s withdrawal of commitments led to Trump’s public complaint of Chinese renegotiation. The withdrawal backfired: an angered Trump imposed additional tariffs, as signaled in his May 5 tweet.

More probably, the withdrawal of the commitments shows that Xi is politically weak. According to this view, he had agreed to the commitments Liu made to the Americans and withdrew them when others objected to the deal. Xi finally realized he was not able to exert his will and force others to accept his commitments.

The Nikkei Asian Review identifies the recalcitrant elements in the Communist Party as the organization’s “conservative Left” and “the rank and file—from the core of workers and management at state-owned companies, from industries that rely on subsidies for survival, and from the bureaucratic institutions that protect them.” As the Japanese journal noted, “The proposed deal threatened their interests.”

Jonathan Bass, chief executive of Los Angeles-based PTM Images, tells the National Interest that there is another element opposing Xi. Bass found during a November 2018 trip to China that provincial officials did not seem to be onboard with Xi on trade issues, thereby adding another level of opposition for the country’s embattled leader.

A variation of this Xi-is-weak theme involves China’s economy. Xi, according to this argument, has taken authority from other senior leaders to such an extent that he has also eliminated anyone to blame. Because the economy is obviously deteriorating—April results, despite massive stimulus, look weak—it was his intention all along to withdraw commitments at the last moment to derail the deal that was close to signature. As Trump said before his meeting with the Hungarian prime minister on May 13, the agreement was “95 percent there.”

That maneuver allows Xi to tell the Chinese people that Americans—and not him—are responsible for the declining economy.

Whether Xi is weak or strong, Beijing’s people’s war label has consequences. Perhaps Chinese officials, accustomed to pushing the United States around, thought they could indulge themselves by using harsh language with impunity. After all, Arthur Waldron, the University of Pennsylvania historian, this week said those officials have looked at America with disdain, as a “nation of bunny rabbits.”

Yet that country of furry creatures has now elected a president who is no longer taking Chinese insults in stride. In addition to hiking the tariffs on $200 billion of Chinese imports as of May 10, he will be imposing elevated tariffs on another $300 billion soon. China has retaliated with higher tariffs on $60 billion of American goods. These measures are unlikely to be the last we see.

If Xi Jinping is indeed weak, as the bulk of the evidence suggests, there is no one for Trump to negotiate with. In Beijing, at the moment, only the most nationalistic responses are politically acceptable—and no one is in a position to sign on the dotted line. Perhaps that is why Chinese media at the end of last week signaled the country is not particularly interested in continuing trade talks.