No Room for U.S. Concessions on Iran’s Civilian Nuclear Aims 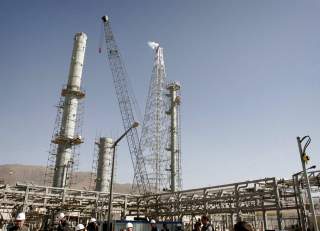 The Trump administration, after reinstating sanctions on the Iranian regime Monday, now seeks to convey that more pressure is on the way. But the messaging by U.S. officials has been mixed, leaving some doubt as to where Washington’s Iran policy goes from here.

For example, it was unclear until only a few days ago whether Iran would be booted from SWIFT, the Belgium-based financial messaging service that is crucial to keeping Iran’s central bank connected to the international banking system. A majority of Iranian banks are now slated to be disconnected from the ubiquitous messaging system, leaving only a few to remain connected for humanitarian transactions.

However, the connected banks can be easily exploited, necessitating strict oversight. And it’s still unclear how Washington plans to monitor their activity.

The administration sought to convey a much tougher line on Monday when the U.S. Department of the Treasury unleashed a massive sanctions tranche of seven hundred re-designated entities, plus another three hundred new ones. But even then, there appeared to be some leniency for the Iranian regime. Specifically, the administration granted waivers for civilian nuclear cooperation on three separate Iranian projects—in the now infamous facilities of Arak, Fordow and Bushehr.

The desire to help Iran maintain access to advanced western nuclear technology and knowhow is curious. For one, if the goal is to apply maximum pressure on Iran, it should not be limited to oil and financial sanctions, even if they are the most important components of a financial pressure campaign. If the goal is to isolate Iran, nuclear knowhow should also be forbidden.

Finally, there is a straightforward legalistic argument against American civilian nuclear cooperation with Iran, namely that once America walked away from the nuclear deal, it was no longer feasible to maintain. With the re-imposition of sanctions, dozens of nuclear personnel from Iran’s Atomic Energy Agency, Ministry of Defense and Islamic Revolutionary Guard Corps have already been added back to the U.S. Treasury Department’s blacklist.

The Europeans, in their tenacious bid to save what is left of the nuclear deal, argue that providing Iran overt access to nuclear technology under Western supervision is better than Iran secretly making advances without oversight. This is a line also repeated by think tanks in Washington. But this is not a binary equation. Iran would almost certainly pursue both. And if the goal is to prevent Iran from accruing nuclear knowledge, for fear that it may make a dash for the bomb at a later date, providing assistance seems unwise, to put it mildly.

For now, it appears the Trump administration has adopted the European view—perhaps as a concession for effectively forcing the Europeans to rejoin the American sanctions regime. But instead of cementing this policy, Washington should take the opportunity to impose a more restrictive policy. This should include more rigorous oversight and real accountability for seller countries of dual-use goods to ensure end user verification. And even if some compromise is reached, there should be no procurement whatsoever for Arak, Fordow or Bushehr.

To stymie Iran’s continued quest for nuclear weapons, the red lines must be clear: no natural and enriched uranium, no conversion and enrichment facilities, no nuclear reactors with weapons-grade plutonium production potential, no reprocessing capabilities, no weaponization system work and no missiles capable of carrying nuclear warheads.

But we must be equally clear about Iran’s quest for nuclear expertise. Washington should return to its previous policy of preventing civilian advances. This should include preventing universities and research institutions, both in the United States and around the world, from teaching, training or employing Iranian students and researchers in the fields of nuclear physics or related fields. The United States should further request that the International Atomic Energy Agency (IAEA) terminate investments and technical assistance for Iranian nuclear projects and end IAEA-hosted seminars and conferences in Iran, as well. Indeed, until Iranian behavior changes, the goal should be to prevent Iran from growing a new generation of nuclear scientists and missile engineers.

Until Iran can comply with Secretary of State Mike Pompeo’s twelve points—eschewing terrorism, political violence, human rights violations and other malign activity—maximum pressure is required across the board. There is no room for concessions—especially not nuclear ones.

Professor Jacob Nagel, a former head of Israel’s National Security Council and national security advisor to Israeli Prime Minister Benjamin Netanyahu, is a visiting fellow at the Foundation for Defense of Democracies where Jonathan Schanzer, a former terrorism finance analyst at the United States Department of the Treasury, is senior vice president.