Nonalignment Nuances: America Is Laying the Groundwork for a Stronger Relationship With India 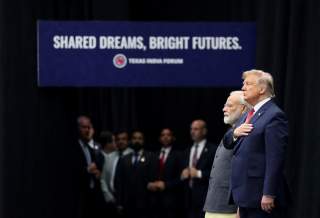 India and the United States are natural allies, according to Alice G. Wells, the acting U.S. secretary of state for South and Central Asian affairs. Wells touted the U.S.-India relationship on the eve of President Donald Trump’s state visit to India, which took place last week. The alliance has been twenty years in the making, she said; it dates back to a speech by former Prime Minister Atal Bihari Vajpayee, who coined the phrase natural allies during a visit to Washington DC in 2000.

Now, just as two decades ago, there is ample reason to doubt the hype about an impending alliance. It’s always impending. If a union between America and India is natural, then nature is taking her time to cement the arrangement. That, however, may be sufficient.

To make sense of this slow-moving process, let’s briefly uncage our inner political scientist. During the late Cold War, Steve Walt, a professor of international affairs at Harvard University's John F. Kennedy School of Government, wrote about and the factors that unite and divide international fellowships. Now, Walt is an über-realist. Like all good international-relations realists, he dwells on power politics. The chief factor that brings together nations, he maintains, is mutual interests. Meeting mutual threats constitutes an especially powerful adhesive. Security, after all, is the top priority for any polity that hopes to endure.

Next in importance come political, social, and cultural affinities. Similar languages, political traditions, customs, and mores tend to draw international partnerships together. Allies that see the political and strategic setting the same way are apt to agree on how to manage it. Like gravitates toward like.

Lastly, Walt espies purely material factors that could consolidate alliances. A wealthy ally could bankroll the endeavor, offering others cash or other incentives to join. A strong ally could strongarm reluctant but weaker partners into a pact, coercing them into doing its bidding. Walt vests little confidence in such arrangements, depicting them as brittle and transient. And for good reason. If you rent an ally, then the alliance endures only so long as you pay the rent. If you point a gun at your ally, then the ally remains faithful only as long as the gun remains locked, loaded, and on target. Managing alliances to which allies aren’t sincerely committed saps the leading power’s resources while diverting attention from more pressing matters.

Threats, sociopolitical affinities, matériel—in descending order of strength and importance—are what bind alliances together if a person subscribes to Walt’s paradigm. Surroundings full of menace spur like-minded societies to make common cause. That’s doubly true if a leading power is willing to bear most of the economic, manpower, and military burden. Attenuate any factor and loyalties begin to falter. Prospects for joint action dim as apathy takes hold.

Now, apply this model to the supposedly natural U.S.-India alliance. Threats first. Beyond question, dangers are gathering in the Indian Ocean region. In recent years, Communist China has mostly dropped its “smile diplomacy,” its effort to persuade other Asian countries that it is an inoffensive and trustworthy—if not beneficent—great power. It is domineering at times. Its Belt and Road Initiative has delivered lodgments for commercial and military endeavors in South Asia. After years of protesting that China would never erect foreign military bases, it summarily did so. Chinese forces squared off against the Indian Army across the Doklam Plateau. And on and on.

Forbearance, it seems, was a tactic Beijing deployed to defuse opposition to its rise to great power. It is not something intrinsic to Chinese diplomacy and strategy, let alone an indicator of China’s future conduct. Like all tactics, it can be amended or discarded once it outlives its usefulness. And yet. Do China’s moves in the Indian Ocean region, each modest in itself, add up to a threat imposing enough to unite India with America? It doesn’t seem so. If New Delhi interpreted things that way, then some sort of alliance—a mutual defense agreement codified by treaty—would have come together by now. But it hasn’t. Nor will it, in all likelihood, unless China makes itself an irrefutably overbearing power in India’s environs.

Next, sociopolitical affinities. Yes, India and the United States are the world’s biggest and its oldest democracies, they share a common language, and they’re scions of the erstwhile British Empire. These are building blocks for an alliance. But they are not enough in themselves. The two societies tote around heavy baggage from the Cold War. Rather than take sides in the East-West struggle, India assumed a nonaligned posture after winning its independence from Great Britain. Indeed, Jawaharlal Nehru, India’s founding prime minister, was one of the prime movers who impelled much of the developing world to join a Nonaligned Movement.

Nonalignment remains a powerful strain in Indian foreign policy. While formally nonaligned, however, New Delhi tilted toward the Soviet Union during the Cold War. Indians were good democrats, to be sure, but they also practiced a form of democratic socialism that saw much to admire in the Soviet model. They also saw the United States as an unreliable partner with a propensity for, say, withholding spare parts, ammunition, and other military supplies during India’s hour of need—chiefly during wars with neighboring Pakistan. They resented the Nixon administration’s deployment of the USS Enterprise aircraft-carrier task force to the Bay of Bengal during the 1971 Indo-Pakistani war, viewing the expedition as a hamfisted attempt to coerce India.

Such bad memories thin the political, social, and cultural glues that might otherwise cement an alliance. In the 1990s, moreover, Washington set itself against New Delhi’s nuclear-weapons efforts for the sake of nonproliferation. The Clinton administration’s policy made perfect sense, embodying the spirit of the Nuclear Nonproliferation Treaty. It also worked against Indian national security interests as Indians construed them. Both India and Pakistan had undertaken serious bomb-making efforts by then. They conducted near-simultaneous nuclear tests in 1998, joining the circle of unofficial nuclear-weapon states. Complying with U.S. demands for disarmament would have meant surrendering the advantage to Islamabad in atomic diplomacy. That verged on unthinkable for New Delhi.

Clearly, then, the two countries suffer from a fraught past. Only after the turn of the century did Washington begin to mute its criticism. In 2008, the two governments struck a civil nuclear deal whereby the United States lifted a longstanding moratorium on nuclear-related trade with India while consenting to provide support for Indian ventures in civilian nuclear energy and satellite technology. It’s no surprise that talk of a natural U.S.-India alliance got its start as the two governments progressed toward a bargain. They had begun to put the past behind them.

Such gradualism is far from unprecedented. Loosely speaking, in fact, current circumstances resemble Anglo-American relations around 1900. Over the course of the nineteenth century, the United States and Great Britain haltingly set aside their differences, which dated back to the late unpleasantness known as the War of American Independence and the War of 1812. By 1823, the two countries were able to work together at sea. For instance, the Royal Navy and U.S. Navy patrolled the Caribbean Sea cooperatively to quash the slave trade. Rancor returned during the American Civil War, when London permitted shipbuilders to fit-out Confederate raiders, warships that went on to ravage Union commercial fleets. In the 1890s the Grover Cleveland administration demanded the right to mediate a dispute over borderlands between Venezuela and British Guiana.

Like the U.S.-India relationship, that is, the Anglo-American relationship underwent highs and lows—notwithstanding the two countries’ common heritage. As Walt might have predicted, it took a compelling threat—namely the rise of imperial Germany—to unite them temporarily. London struck up an arrangement with Washington whereby the Royal Navy mostly withdrew from the Western Hemisphere while the United States agreed to tend British interests there. That allowed Britain’s navy to compete against the German High Seas Fleet building in the North Sea, hard by the British Isles.

The United States eventually sided with the Allies in World War I, helping subdue the Central Powers by 1918. Even so, President Woodrow Wilson regarded the British ally as little better than the German foe. Britannia was a maritime tyrant in Wilson’s eyes, just as Germany was a terrestrial tyrant. In fact, Wilson threatened to run a naval arms race against America’s ally if British leaders balked at his scheme for postwar order on the high seas. Not until World War II and the early Cold War did the special relationship familiar to Americans and Britons really take root.

It seems dangers must be clear and present to unite standing alignments such as NATO or the U.S. -Japan alliance. Just as America was loath to abandon its Monroe Doctrine, its venerable policy of nonalignment, it may take a threat on the order of an Axis or a Soviet empire to induce India to put aside its own tradition of nonalignment. If New Delhi comes to see China as a menace of that amplitude, then it may rally with Washington with more alacrity than has been the case since Vajpayee broached the idea of a natural alliance. Until an overbearing threat takes form, India will continue with its leisurely approach—an approach that may or more may not culminate in a formal defense accord.