North Korea—Now What After Hanoi? 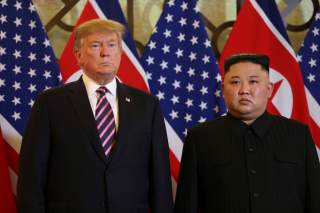 If we’ve tried to do something for twenty-five years and not found success, we may wish to reconsider our objective and our plans. Four U.S. administrations pursued the elimination of North Korean nuclear weapons. Four failed.

This was not for lack of effort. We deployed many forms of negotiation and development assistance, including—most ambitiously—the international Korean Peninsula Economic Development Organization and its promise of light water reactors to supply electricity in support of the Agreed Framework in the 1990s. There was no national distribution grid, but that was something to be solved down the road. This was in the early post-Cold-War Clinton years when we had reason to think we could accomplish anything. I didn’t work, for many reasons. Subsequent administrations made very credible efforts, also to no avail.

Perhaps we are pursuing the wrong objective. North Korea’s nuclear weapons program started in the 1950s. They will not abandon this capability. Continued pursuit of this impossible dream allows Kim to outplay us and imposes diplomatic, reputational and financial costs on America and our allies.

Kim’s nuclear and missile weapons programs are means serving more than one end. These include regime survival through deterrence against forcible regime change. Coercion is another benefit. Domestically, nuclear weapons demonstrate the power of the Kim ruling family, useful to keeping his core supporters, estimated at a million or so, in line. Beyond North Korea’s borders, nuclear weapons shape the actions of Russia, China, South Korea, Japan, and the United States because North Korea cannot be ignored.

Nuclear weapons also support North Korea’s diplomacy in pursuit of aid and status. North Korea skillfully mixes capability demonstrations, provocations, and conciliatory signals to leverage aid from the United States and to influence politics in South Korea, Japan and China in its favor. This “nuclear-powered diplomacy” was most recently shown as we moved from threats of “fire and fury” and a “bloody nose,” and from taunts of “little rocket man,” and nuclear button comparisons to “beautiful letters and we fell in love.” We unilaterally canceled combined exercises and unilaterally declared that North Korea was no longer a nuclear threat. Kim’s multiple individual summit meetings with the leaders of the Republic of Korea, the People’s Republic of China and the United States is an unprecedented achievement. The number of his meetings with these leaders is far greater than the meetings they have had with each other.

Nuclear capability is business and revenue. Nuclear weapons technology, expertise, and material are in demand in the most odious regimes. Selling this brings major resources to the ruling family.

Moreover, Kim’s influence in South Korea—not a typo—continues to be very strong. He enjoys very high poll ratings, higher than President Moon, and with this comes influence and leverage over South Korean opinion and politics. Kim exploits the desire of many in South Korea for some sort of reconciliation with their long-isolated counterparts in the North.

President Moon of South Korea is ever more vulnerable to North Korea’s very effective influence campaign. Stubborn economic challenges combined with nettlesome scandals press downward on Moon’s approval ratings. He was riding high at 80 percent approval following the Singapore Summit. He dropped to 50 percent before the second summit. He needed a successful Hanoi Summit, defined as an agreement sufficient for the United States to ease sanctions to permit North-South economic cooperation, to recover. He—and we—didn’t get it.

Kim did get a “success,” as defined by continued high approval ratings in South Korea and decreasing military preparedness south of the Demilitarized Zone. All of this sets the table for more difficulties in the U.S.-Republic of Korea Alliance, exacerbating the differing objectives of America and South Korea. Kim’s success also is causing enhanced worries and doubts in Japan about North Korean capabilities and us enhancing Kim’s prestige among his core supporters at home. Apparently, we even gave him a pass on the brutalization of Otto Warmbier, his family, and much of America. Nearly a clean sweep.

It may be that Kim did not get a lifting of sanctions, but in their current state, we are a long way from the “maximum pressure” sanctions that we declared earlier. North Korea will survive the sanctions as they currently exist, but of course, they will continue to complain as a component of their successful influence campaign. And their complaints will fall on many sympathetic ears.

Most importantly, there is a real possibility that Kim has a better-than-even chance to divide the United States and South Korea. President Moon must run fast to the left to get in front of the developing consensus among his constituents. That will likely take the shape of some semblance of a peace settlement, sufficient to rebuild peninsular rail lines from south to north and the recommissioning of joint industrial areas.

As in the days of President Kim Dae-jung’s “Sunshine Policy”—formally titled The Reconciliation and Cooperation Policy Toward the North—the allure of mutual South-North economic power combined with the possibility of progress toward some undefined peace between a vigorous democracy that values free will and human rights in the South with a brutal totalitarian regime that treats these virtues as something to persecute, incarcerate, torture and execute, will be irresistible. Might this just succeed despite the long odds? Sure, but it’s hard to bet the house on it, especially when there has been no “deep thinking” on what roadmap we might follow to get through this maze.

On our side of the Pacific, questions about the value of U.S. alliances, particularly our forward-deployed forces, recur with depressing frequency in the news. It will not have escaped President Moon’s attention that we have spent far more leadership time and resources on Kim Jong-un than we have devoted to allied leaders in the region. Both can be additional indicators of success in Pyongyang.

Restore what we conceded unilaterally. If Kim is reconditioning his weapons sites, we can at least restore our exercises in full, perhaps even strengthening them as a clear signal that we’re not intimidated or blinded by love. This will be very difficult for President Moon, so we must be ready to help him in other areas.

Start and maintain newly energized security consultations and actions with our allies and countries in the region. Double down on alliance capabilities in Japan and South Korea that directly counter North Korean capabilities. This must include, as a matter of priority, deterrence by denial of Kim’s ability to attack Japan and Korea with nuclear weapons or other weapons of mass destruction. The “Boost Phase Intercept” capabilities highlighted in public Missile Defense Agency documents must be made operational as an urgent matter. Being able to destroy nuclear-armed North Korean missiles over North Korea just about eliminates the value of the long-standing Kim family weapons investment program.

Washington should also renew cooperative programs with regional nations to attack and eliminate illicit North Korean banking activities across the region. Willie Sutton knew where the money was. We must also. And we must “rob” them and perhaps return the seized ill-gotten gains to the Southeast Asian nations that can use the help.

Keep talking to North Korea. Don’t discount four-or six-party talks just because they were someone else’s idea. Be realistic. This is not about “relationships,” good or otherwise. This is brutal business, not personal. Talk with North Korea as Goldman Sachs would, not as if we need a “good meeting.” We need reality.