North Korea after Regime Change: Who Takes Over? 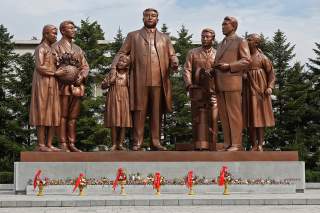 Seoul’s JoongAng Ilbo newspaper caused quite a stir on March 14 when it carried a report titled “SEAL team that took out Osama bin Laden joins drills in Korea.” Quoting sources in South Korea’s Ministry of National Defense, the paper reported that “SEAL Team 6, will arrive in South Korea soon for joint military drills and take part in an exercise simulating the removal of North Korean leader Kim Jong-un.” The report led to an expeditious denial by “a senior defense official” to Fox News.

As tensions continue to build on the Korean peninsula, and as President Trump and North Korean leader Kim Jong-un go mano-a-mano in a verbal exchange, new solutions are being sought to address the conundrum. On March 8, U.S. Ambassador to the United Nations Nikki Haley declared that “all options” are on the table. On March 17, Secretary of State Rex Tillerson did the same, raising the prospect of preemptive action against North Korea.

The Trump administration’s policy review, “aimed at countering North Korea’s nuclear and missile programs,” was completed in early April, according to Reuters. Completion of the review was “accelerated to have it done before Trump’s summit with Chinese President Xi Jinping.” The review, led by National Security Advisor H. R. McMaster, proposes a multipronged approach aimed at tightening the screws on North Korea economically and militarily. Although preemptive military strikes against North Korea are not off the table, the review gives priority to less-risky steps and “de-emphasizes direct military action.”

Before his summit with Xi, President Trump had declared in an interview with the Financial Times that the United States is prepared to respond to North Korean nuclear threats on its own if China fails to pressure Pyongyang. The Washington Post, ran the front-page headline “South Koreans are dealing with a new wild card—in Washington.” The article noted increasing jitters in Seoul over the the U.S. president’s policies and that “Trump has proved himself quick to hit the send button on his early-morning tweets and willing, in Syria and Afghanistan, to order surprise airstrikes.”

Few can predict how President Trump would respond if the provocative Kim Jong-un were to conduct a sixth nuclear test or launch a long-range ballistic missile threatening the West Coast of the United States. In those risky scenarios, all bets are off. Continued inaction, however, along the lines of the “strategic patience” policy of the previous administration, would likely result in a North Korea that can directly threaten the United States with nuclear weapons before the completion of President Trump’s current term in office.

The removal of Kim Jong-un from power, in any case, would not be the end; it would only be the beginning. First, due to generations of mass brainwashing, the North Korean leader commands fanatical loyalty from the overwhelming majority of his populace, as demonstrated by the public adulation displayed during the recent military parade on the Day of the Sun anniversary of his grandfather’s birth. Second, as reported in the Daily Mail, Kim Jong-un unveiled his elite Special Forces unit during the parade. “The menacing and ‘highly trained’ troops yelled patriotic slogans as they carried rifles fitted with grenade launchers through the streets of the Pyongyang during a military parade on Saturday,” the article noted. “‘Once Supreme Commander Kim Jong-un issues an order they will charge with resolve to thrust a sword through the enemy’s heart like lightning over Mount Paektu [the country’s highest peak],’ a broadcaster announced on North Korean state TV.” They also constitute a special Praetorian Guard dedicated to protecting their leader from any attempted assassination.

Third, a sudden removal of Kim Jong-un from power could create a proliferation nightmare with rivals vying for power, each with their own stockpile of nuclear and chemical weapons. A sudden vacuum in Pyongyang would need to be filled very quickly to prevent a rapid descent into chaos, with rogue generals and a potential massive refugee movement. Chaos, the nightmare of every Chinese dynasty for the past two millennia, would likely manifest itself on the Middle Kingdom’s North Korean border.

A game plan, therefore, would be required for a post–Kim Jong-un North Korea. Such a delicate and risky political maneuver would require Beijing’s acquiescence, as President Trump has indicated. Meeting Beijing’s national-security priorities of maintaining, at least for a certain period of time, a buffer state on its northeast frontier and preventing a massive influx of refugees should be a key consideration.

The leadership in Beijing, including Xi Jinping, the most formidable Chinese leader since Deng Xiaoping, has little affection for its petulant and disrespectful North Korean ally. The fact that Pyongyang’s “bad boy” has yet to receive an invitation to Beijing after over five years in power, unlike both his father and grandfather, is a telling signal from the protocol-conscious Chinese. In addition, by killing his relatives with close ties to China, including his uncle Jang Song-thaek and his half-brother Kim Jong-nam, Kim Jong-un has signaled his total disdain for Beijing.

How does one solve a problem of such magnitude? And where is there common ground? One possibility may lie with the son of the murdered pro-Chinese Kim Jong-nam. Kim Han-sol, his twenty-one-year-old son, is very young for accepting a leadership role. But Kim Jong-un himself was only twenty-seven when he was suddenly thrust into power upon the death of his father in 2011. The key to North Korean acceptance of such a neophyte as supreme ruler of the country seemed to be his biological link to the “sacred” Baekdu bloodline.

If Kim Jong-un is the chief male descendant of the third generation of that bloodline, Kim Han-sol is the chief fourth generation direct descendant—and this may make him a palatable alternative for some in Pyongyang. Further, Kim Han-sol is a descendant of a branch of the Kim family, which, in direct contrast to Kim Jong-un, has consistently maintained cordial relations with North Korea’s Chinese benefactors. And he could even possibly put forward a proposed idea for a confederation with South Korea as a stepping stone to eventual reunification, if he gained ascendancy in Pyongyang.

And Kim Han-sol stands in stark contrast to his uncle. Kim Jong-un demonstrated no enlightened tendencies upon his assumption of power, even though his Swiss education led to misplaced expectations in certain quarters. If anything, he has been even more ruthless than his father and grandfather, who drew the line at killing fellow family members.

Kim Han-sol was educated in Paris. He recently surrendered a coveted opportunity to study at Oxford out of fear for his life, even before his father’s death. The Daily Mail reported that there had been “warnings from Chinese security officials that the North Korean leader was plotting to kill both the 21-year-old and his father.”

The BBC referred to Kim Han-sol as “the open-minded son of Kim Jong-nam.” It then quoted from a 2012 interview with Finnish television where he said, “I’ve always dreamed that one day I would go back and make things better, and make things easier for the people back there. I also dream of unification.”

The same report noted that although his immediate family was reportedly living in exile, Kim Han-sol, who was then seventeen-years-old, said that he visited North Korea every summer to “meet with my relatives and keep in touch with my family.” When asked about his uncle, he said, “I don't really know how he became a dictator because first of all it was between him and my grandfather.”

But where is this young descendant of the Baekdu bloodline now? Kim Han-sol immediately went into hiding after his father was murdered with an internationally-banned chemical agent. A video surfaced on March in which a person claiming to be Kim Han-sol thanked “the governments of The Netherlands, China, the United States and a fourth unnamed country” for providing emergency humanitarian assistance to protect him and his family. An official in South Korea’s National Intelligence Service said that the man in the video is Kim Han-sol.

Since then, Kim Han-sol, his mother and his sister have vanished without a trace. Hopefully he is in Chinese protective custody. And, if so, the United States may wish to discreetly discuss with Beijing contingency plans for placing this Manchurian candidate as a stand-in leader if regime collapse comes to Pyongyang. This young man may prove to be the best hope for avoiding chaos, including a potential nuclear conflagration, on the Korean peninsula.