North Korea Really Wants a Peace Treaty but What Will It Give Up? 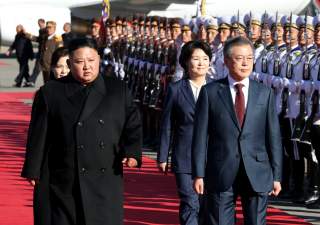 I have argued throughout 2018 against giving North Korea a peace treaty without substantial counter-concessions. South Korean president Moon Jae-in is a progressive and a dove on North Korea. He is leading this year’s outreach to the North, and part of his wider agenda is winding down the technically still unfinished Korean War of 1950–53. To my mind, Moon has been overly-willing to grant this for too little in return. Others in South Korea and the United States—South Korea’s main treaty ally—have argued similarly.

The Moon government has therefore retrenched from the clear language of a “peace treaty” to vaguer language of a “peace regime” or “end of war declaration.” This is thorny because it is not quite clear what these other terms mean. A peace regime would seem to suggest some manner of inter-Korean political framework surveilled, perhaps, by others, such as the United Nations. And an “end of war declaration” is even more slippery. I spoke at a National Assembly Research Service event in Seoul a few weeks ago, and even South Korean members of parliament, among themselves, argued and disputed what this meant. The consensus seemed to be that it was some kind non-binding resolution of intent rather than a formal treaty.

If this is the case, if it is not a formal peace treaty with legal obligations to close the UN presence here, then perhaps America should sign it after all. But if this is the case, it also seems increasingly meaningless. Just last week, North Korea said such a declaration would not be enough for it to denuclearize. Moon has watered this thing down so much, that no one now is quite clear what it is anymore or what its value is.

The most obvious move, and one easiest for laymen to understand, is to sign a peace treaty ending the war. The war has of course been over in practice since 1953, so this is prima facie attractive. North Korea has sought this for a long time, and it could be rolled into this year’s détente. This was originally Moon’s hope, and his foreign minister, Kang Kyung-wha, has brought it up all year.

But Moon is in a political bind because a proper peace treaty—one which resulted in two Korean states living side by side in peace—would need to have legal consequences for the UN and U.S. position in Korea, and it would need to legitimize North Korea’s existence as a successor state emergent from the Korean civil war. This fallout would be so politically contentious in South Korea that Moon has been forced to back-pedal to vaguer language.

An actual peace treaty—not just some vague statement of generous intent—would undercut the legal and strategic grounds for the U.S. alliance. If the two Koreas are at peace and a peace treaty brought genuine demobilization on both sides of the DMZ, then would the UN presence be needed? The UN Command in South Korea could be closed down—its purpose fulfilled. Similarly, if North Korea is now a peaceful neighbor rather than a Leninist threat, does South Korea need the American alliance? Might well U.S. troops leave South Korea, as the peninsula was now home to two states living in peace?

Moon’s own leftist coalition may indeed be comfortable with this unfolding of events. They have far more faith in the word of North Korean leader Kim Jong-un than much of the world. And the South Korean left has long had a mixed view at best of America’s presence. But too much of the South Korean public wants to retain the U.S. alliance for Moon to push things this far.

The U.S. alliance is very popular in South Korea, with over 90 percent approval. South Koreans are indeed nationalistic but also aware of their exposed position, surrounded by Russia, China, Japan, and North Korea. The U.S. alliance is a valuable reassurance in such a tough neighborhood, and generations of South Koreans have been raised with it, learning to speak English, traveling to America for school, and so on.

Furthermore, a peace treaty has another significant consequence—recognition of North Korea by the South as a legitimate state governing one-half of the peninsula. Currently, the South Korea constitution claims northern Korea as its own, the implication being that North Korea itself is an aberration in Korea’s long united past, an Orwellian cul-de-sac of history to be quickly forgotten once it is gone—much like East Germany has faded unmourned into the past.

A peace treaty would obviate all that. No longer would North Korea be viewed as a deviation or abnormality, with the “real” Korea being South Korea. Now the two would recognize each other with joint signatures on a treaty. The implication of that, in turn, would also be disarmament. If the two are at peace, would not their militaries pull back? But for South Korea, whose large capital city is just thirty miles from the border, this is risky.

Moon has yet to really tackle these issues. Despite months of talking this up, he has yet to give a programmatic speech on what precisely this declaration would mean, leaving both South Korean members of parliament and the United States confused about what he is seeking. Hence, a peace treaty has turned into an elastic “end of war declaration.” If it is just a signal of intent, then sure, sign it. But if it is to be a real treaty, America and South Korea should pursue concessions for it, given that North Korea wants it far more than we do.