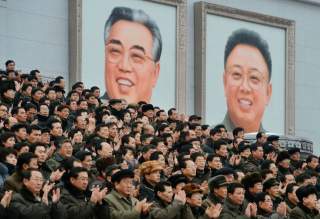 Following North Korea these days gives even the most seasoned observer whiplash as both sides seemingly shift from one extreme to another sometimes in twenty-four hours. Yet one thing is certain. North Korea is testing United States President Donald Trump to see how much bad faith he is willing to tolerate in the name of engagement. The Trump administration must see through North Korean leader's Kim Jong-un's games and insist that he make a strategic decision to denuclearize followed by tangible and irreversible actions towards that end goal.

Kim is using a well-worn playbook that his father and grandfather used to great success. Namely, promise denuclearization while insisting on phased implementation, which is code for backloading North Korean obligations and front loading concessions from the U.S. and its allies. It's an approach that's been remarkably successful for Pyongyang, but a failure for Washington.

Another aspect of North Korea’s modus operandi is to continue sanctions busting and proliferation activities during negotiations, even while the U.S. shows restraint. Unfortunately, Chinese leader Xi Jinping is a willing participant in this game. Following Kim’s second summit with Xi in early May, Pyongyang’s rhetoric took a darker turn and North Korean workers, and seafood has returned to the border city of Dandong, signaling China’s looser implementation of sanctions. Japan also detected a ship-to-ship transfer involving a Chinese vessel, a practice that violates United Nations sanctions that Beijing supported. Additional reporting also noted the return of a North Korean ship to a Chinese coal handling port, suggesting that Beijing likely is violating UN sanctions on coal exports, thereby generating revenue that Pyongyang can use for its weapons programs.

Beyond these visible fissures in the maximum pressure campaign, North Korea continues its close relationship with Syria. Last week, Syria’s dictator Bashar al-Assad declared that he would visit Pyongyang to meet with Kim. Assad and Kim have worked together on weapons of mass destruction programs at least since North Korea built a nuclear reactor in Syria that Israel destroyed in 2007. In addition, the UN Panel of Experts earlier this year detailed that Pyongyang and Damascus are cooperating on chemical weapons and ballistic missiles. The Trump administration should draw a bright red line that continued Syria-North Korea collaboration will end U.S.-North Korea diplomatic efforts.

North Korea also increased its cyber-attacks against South Korea even after Pyongyang pledged to “completely cease all hostile acts” “in every domain” in the Panmunjom Declaration in April. Also, Pyongyang's apparent goodwill gesture of destroying its nuclear weapons test site did not destroy the tunnels and is likely reversible.

Unfortunately, there are strong signs that the Trump administration is still relying on the old U.S. playbook of unconditional engagement. Despite North Korea’s continued provocations, the U.S. decided to hold off on issuing a set of new North Korea-related sanctions, likely targeting sanctions evaders. Additional sanctions are needed to maintain the momentum of maximum pressure and send Kim a message that he needs to stop his sanctions-busting and proliferation. Equally troubling were President Trump's comments last week that he does not even want to use the phrase “maximum pressure.” Neutering the policy that helped force North Korea to the table will result in a predictable and disappointing outcome for Washington.

There is still time to change course, however. Reporting this week suggests that President Trump will insist on a timetable for denuclearization, not offer additional concessions, and demand that North Korea take the first step on denuclearization. This is the right approach; the key question is whether Kim has made a strategic decision to denuclearize. If he has, it should be easy to discern. Kim would come to the meeting prepared to talk about a “big for big” compromise where North Korea takes a significant, irreversible step toward denuclearization. The Trump administration will need to take a commensurate step after verifying that Kim has honored his commitment. If Kim balks, Trump should end the talks and tell Kim that Maximum Pressure 2.0 will go beyond prior efforts, which is what Kim really fears.

Kim has to decide whether his nuclear weapons program makes him more or less secure. The North Korean playbook says to keep the program and ratchet up the provocations until Washington caves into Kim's demands. The question is whether Trump will write his own playbook and reject Kim's fake smile diplomacy or fall into North Korea's trap like his predecessors.

Anthony Ruggiero, a senior fellow at the Foundation for the Defense of Democracies, was the nonproliferation advisor to the U.S. delegation to the 2005 rounds of the Six-Party Talks and spent more than seventeen years in the U.S. government. Follow him on Twitter @_ARuggiero.

Image: North Koreans applaud in front of portraits of North Korea's founder Kim Il-sung (L) and late leader Kim Jong-il as they gather at a rally to celebrate the successful launch of the Unha-3 (Milky Way 3) rocket, which carried the second version of the Kwangmyongsong-3 satellite, in Pyongyang, in this picture released by Kyodo December 14, 2012. When North Korea's Kim Jong-un commemorates a year of his rule next week, he will be able to declare he has fulfilled the country's long-held dream of becoming a "space powerhouse". In a mass parade in Pyongyang on Friday, tens of thousands of soldiers dressed in olive green and standing in serried ranks, as well as bareheaded civilians, celebrated this week's successful rocket launch, hailing Kim's "victory". Mandatory Credit. REUTERS/Kyodo