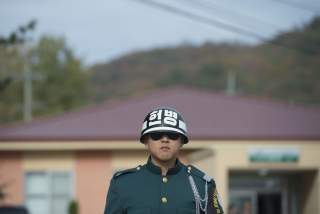 Those who have talked recently with South Korean foreign-policy and national-security experts will have noticed that they are quite apprehensive. There are at least three explanations for this.

The ongoing political controversy around President Park Geun-hye is one. South Koreans in the know certainly have differing views on whether their president’s predicament will affect their country’s stability. As some see it, the mere fact that she is being been held accountable demonstrates that democracy has sunk deep roots in South Korea. Others are leery, however, and not just about the possibility of a crisis within South Korea. They are also concerned that North Korea might exploit the South’s political turmoil, possibly through a military challenge of some sort.

Seoul’s political class and national-security establishment incline toward a standard, predictable view of their northern nemesis. They see it as militarized, menacing, opaque, wildly unpredictable, even irrational. They point to its numerical advantage in military manpower and most categories of conventional weaponry, and to its nuclear weapons and arsenal of ballistic missiles. And they stress that Pyongyang’s pugnaciousness and military might leave South Korea exposed and vulnerable. In their eyes, people who discount the North Korean threat typically have the luxury of living far away or are ill informed—perhaps both.

Apart from President Park’s problems and Pyongyang’s unpredictability, South Korean foreign- and defense-policy experts worry that Seoul’s protector par excellence, the United States, will prove less reliable now that Donald Trump is the president-elect. His victory astonished most South Korean specialists on American politics just as much as it did their stateside counterparts. During his campaign, Trump accused allies such as South Korea of free riding at America’s expense. He demanded that they do more for their own defense and even suggested that Japan and South Korea consider building nuclear weapons to that end. South Korean strategists would be irritated to hear such views at an academic seminar; they were unnerved to hear them voiced by the next occupant of White House. Yes, South Koreans worried when President Jimmy Carter raised the possibility of pulling American troops out of South Korea—he didn’t follow through—but their nervousness about Trump’s intentions runs much deeper.

What’s odd about this triple-charged anxiety— produced by Park’s problems, Pyongyang’s arsenal and Trump’s worldview—is that most South Koreans defense experts also favor imposing much tougher economic sanctions on North Korea. That, they believe, is the only way to pressure Pyongyang to dismantle its nuclear weapons and cease its ballistic-missile tests. They claim that North Korea’s leaders will bend if they are forced to confront serious pain, especially because the North’s polity and economy are already in danger of collapsing. The image of a menacing North Korea thus coexists with that of a North Korea that is vulnerable, even doomed. The likelihood that North Korea’s disintegration could create colossal problems for South Korea and that draconian sanctions could produce precipitate the North’s implosion do not seem not to elicit great concern. Not all influential South Koreans feel this way, of course. But many do.

The assessment of South Koreans who are influential on foreign and defense policy regarding the balance of forces on the Korean Peninsula aligns remarkably well with that of American experts on South Korea—especially those based in or near Washington, DC. Someone who challenges this alarmist consensus, a rare event in my experience, will cause eyebrows to arch and heads to shake in disbelief. But the resiliency of the consensus doesn’t necessarily mean it’s valid. Indeed, the facts don’t support it.

To assess South Korea’s vulnerability, let’s start by comparing the North and the South using standard measure of power: population. South Korea contains 50.6 million people and North Korea 25.2 million: a two-to-one in the South’s favor. Now, a large population need not be an advantage, especially for poor countries. But South Korea, as I show below, is certainly not poor. That makes all the difference. Thanks to South Korea’s advanced society and economy—also discussed below—its numerical advantage in population yields a far more important asset, namely a massive lead in the quality of human capital: a people’s skills, capabilities, quality of life and potential.

The data pertinent to gauging human capital highlight the South’s advantage. True, North Korea has achieved universal literacy, or close to it. But South Korea’s schools and universities have incomparably better funding, teacher training and educational technology. And some South Korean universities, such a Seoul National, which is ranked seventy-second internationally or 119th, depending on the source one consults, are world-class. By contrast, no North Korean university makes the list of the world’s five hundred best. This matters. When it comes to science and technology, both of which have long-term consequences for a country’s economic and military power, the quality of the educational system is crucial. The canyon-size gap between North and South Korea in technology and innovation makes this clear.

Other indices relating to human capital also point to the chasm between the two Koreas. Consider five of them:

• Maternal mortality rate (11 per one hundred thousand live births, versus 82);

• Caloric intake (3,329 compared to 2,103, with one type of grain, and very little meat, accounting for most of North Koreans’ calorie consumption);

Indices such as these account for why the South’s two-to-one advantage in population matters; quantity becomes a massive asset when combined with quality.

The data on economic power is no less lopsided. South Korea’s GDP, measured in purchasing power parity, is $1.4 trillion in 2014, making the eleventh largest in the world. North Korea’s, by contrast, was $30 billion—the 113th place internationally, behind Honduras, which has a population one-third the size of North Korea’s. They key point to keep in mind here is that the South’s economy is forty times larger than the North’s.

Per capita income, a rough measure of living standards, stacks up as follows: $33,000 for the South (forty-ninth in rank) versus $1,800 for the North in 2015 (210th in rank, on par with Haiti). That amounts to a 18:1 ratio favoring South Korea. The South’s wealth gives it a huge in savings and investment and a greater capacity to sustain high levels of defense spending (about which more soon). And South Korea’s higher per-capita income widens the education gap further. It enables tens of thousands to attend the world’s premier universities each year. In 2012, 239,213 of them studied abroad, nearly 31 percent of them in the United States. By contrast, North Korea’s poverty and closed polity work against it.

Now it could be said these data don’t matter, that what really does is North Korea’s aggressiveness and menacing military machine. But the standard view of the military balance between North and South, which is that it favors the former decisively, bears scrutiny. It bears scrutiny, even though North Korea has been testing nuclear weapons since 2006, and even though the North has tested an array of ballistic missiles since the 1990s (variants of the Taepodong, plus the Nodong- and Musudan-class, creating an inventory of some 250 in all), including a submarine-launched version in 2016. (The first test, in July, flopped. The second, in August, did not; but the missile traveled a very short distance—hardly proof that the North has built an SLBM that can carry a nuclear warhead.)

The numerical tally typically used to compare military power favors the North, and pretty decisively: tanks (3,500 versus 2,414), artillery (21,100 versus 11,000) and submarines (72 versus 23). The only armaments that display a different pattern are combat aircraft (the South has 563, the North 571, parity in effect), frigates (three versus fourteen, in favor of the South) and destroyers (none for Pyongyang, six for Seoul).

There’s one military-relevant measure in which the South outclasses the North decisively, and it highlights the importance of overall wealth: defense spending. South Korea spends $33.2 billion on its armed forces. The North allocates $10.2 billion according to South Korean estimates, which tend to be higher. That’s still a 3:1 ratio favoring the South. Moreover, given the size of its economy, South Korea has a wholly manageable defense burden of less than 3 percent of GDP, compared to 25 percent for the North.

South Korea’s larger defense budget is accounted for partly by higher personnel costs. Still, the South’s advantages in wealth and technology have enabled it to build a military equipped with weapons far more advanced than the North’s. The purchase of arms, mainly from the United States, explains this qualitative lead, but so does production at home.

Thus North Korea’s lead in numbers must be must be placed in perspective. Consider submarines. The North has many more, but the South’s fleet is far more advanced. Its mainstays are the Chang Bogo–class diesel electric and the diesel electric/fuel cell hybrid Son Won-il class. The latter has air-independent propulsion (AIP), which increases a submarine’s endurance and enables it remain submerged longer.