North Korea Will Give up the Bomb and Normalize 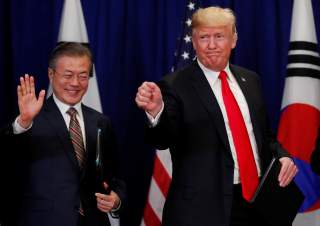 But by the time Trump abruptly canceled Secretary of State Mike Pompeo’s planned trip to Pyongyang in late August, citing lack of progress in denuclearization, it had become clear that his optimism was premature. Yet, the September Pyongyang summit between Kim Jong-un and South Korean president Moon Jae-in reignited hope that peace is dawning upon the Korean Peninsula and progress is being made towards denuclearization. In fact, Pompeo is now rescheduled to travel to Pyongyang in October to lay the groundwork for a second Trump-Kim summit. However, the road ahead is full of twists and turns. Several factors contribute to the elusiveness of North Korea’s denuclearization.

First of all, the United States and North Korea, the two principal players, have not agreed upon the exact meaning of “denuclearization.” The U.S. policy has been CVID—complete, verifiable, and irreversible dismantlement of North Korea’s nuclear program. Simply put, North Korea must follow United Nations resolutions and dismantle its nuclear stockpile and program entirely and unconditionally. For North Korea, security is of primary concern and denuclearization applies to the whole Korean Peninsula including U.S. troops in South Korea. Moreover, North Korea considers its nuclear state status a fait accompli and has enshrined that status in its 2012 Constitution. It may not further test nuclear weapons, but it has never promised to scrap its nuclear program.

The distrust between the United States and North Korea runs deep. The historical memory of the tragic Korean War still shapes North Korea’s worldview today. A couple of summits between Trump and Kim and several letters are unlikely to dispel that distrust. If North Korea’s security is not guaranteed, it is wishful thinking that Pyongyang will yield to external pressure to abandon its nuclear program. Therefore, without taking North Korea’s security concerns seriously, it is counterproductive for the United States or others to unilaterally demand Kim Jong-un voluntarily denuclearize.

Second, the North Korea nuclear issue is a regional challenge whose resolution requires multilateral cooperation, yet the parties involved are not moving in tandem.

Other key players—especially China, South Korea and Russia—are crucial to the denuclearization process. While the United States is bent on putting maximum pressure on North Korea, China, Russia, and South Korea are more pragmatic and have all recently eased sanctions against Pyongyang. For example, North Korea opened a trade office in Russia’s Far East, North Korean restaurants in China were reopened, and cargoes carrying North Korean coal were found on the South Korean coast. A joint liaison office with resident representatives of both Koreas was also established in Kaesong. Kim Jong-un’s warming relations with Xi Jinping and Vladimir Putin have boosted his confidence in dealing with Trump, but Washington’s strained ties with both Beijing and Moscow have unnecessarily complicated the denuclearization process.

China remains influential in North Korea. The fact that Kim Jong-un met Xi Jinping three times in 2018 speaks volumes of how the two have repaired their relations. Furthermore, the policies of South Korea and the United States appear out of sync now. Critics fear that President Moon and his progressive government are moving too fast in accommodating the North, which may undermine the U.S. effort to denuclearize North Korea through both dialogue and pressure.

Thirdly, outsiders may be underestimating Kim Jong-un’s commitment to economic development and are unprepared to deal with a post-nuclear North Korea.

A prevalent view from many pundits and think tankers is that the nature of the North Korean regime has not changed, North Korea broke past agreements, and even the Pyongyang Declaration by Kim and Moon is déjà vu, so one should not naively believe Kim Jong-un will be any different.

But such anachronistic thinking ignores that fact that Kim Jong-un has emerged as a different leader than his father and grandfather. What happened in the past does not preclude future possibilities. The Western-educated Kim’s byungjin policy (parallel development of both the economy and military) represents a more sophisticated approach to addressing North Korea’s domestic challenges. In his first public speech in 2012, Kim Jong-un pledged to develop his country’s economy so that his people “will never have to tighten their belt again.” North Korea’s economy has been slowly growing in the past few years despite heavy sanctions. During the Pyongyang Summit, Kim told Moon that he wanted early denuclearization so as to focus on economic development. Kim has conveyed that same message to the United States consistently.

However, the unpreparedness to deal with a post-nuclear North Korea is a challenge for major powers. The United States narrowly focuses on denuclearization while China’s “Belt and Road Initiative” has not extended to cover North Korea yet. The two powers have yet to map out a blueprint to help North Korea integrate into Asia’s dynamic growth so that the North Korean people can fully enjoy the benefits of development, like their brethren in the South.

Since the Singapore summit, North Korea has taken several steps to show its sincerity. This includes returning to America the remains of possibly fifty-five U.S. soldiers who died during the Korean War. Additionally, North Korea has not provocatively showcased ICBMs during their September 9 National Day military parade in Pyongyang. Kim also promised to permanently decommission the Yongbyon nuclear-enrichment facility under the watch of international inspectors provided the United States took “corresponding steps.” From the North Korean perspective, the United States has not done enough to reciprocate. So far, the United States only canceled its joint military exercise with South Korea without further measures to ease North Korea’s security concerns.

Finally, Korean nationalism has to be recognized as a powerful force for denuclearization and peace on the Korean Peninsula. The image of Moon and Kim holding hands at the top of the sacred Baekdu Mountain is highly symbolic of Korean unity. The Koreans desire peace and want to formally end the Korean War. China and Russia have supported the idea, but the United States remains wary. Hardliners like U.S. ambassador to Seoul Harry Harris continue to disregard reconciliation of the two Koreas and instead shift all the burdens on North Korea.

President Moon’s vigorous mediation efforts are remarkable. A supporter and practitioner of the “Sunshine Policy,” Moon—whose parents fled from the North to the South in 1950—has a historic mission to see the Korean people living in peace and unity. Kim seems to share that vision. With a conducive international environment, it is hopeful that the Korean Peninsula will not only be nuclear-free but become a peaceful, prosperous, and unified nation in the not too distant future.

Developments on the Korean Peninsula since the beginning of 2018 have been encouraging. The inter-Korean reconciliation is making significant progress, and Kim Jong-un has demonstrated boldness and seriousness through his charm offensive. The United States and other powers should respond in kind and show courage and flexibility. The spell of the elusiveness of North Korea’s denuclearization must be broken. No one should let this historic opportunity slip by.