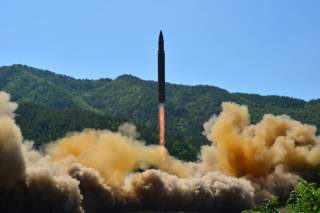 North Korea’s latest launch of their most sophisticated and far-reaching intercontinental ballistic missile to date, the “Hwasong-15”, has the world on edge. And for good reason; the pace of Pyongyang’s delivery system and corresponding nuclear warhead materials development has surprised many experts. But it’s too early to panic. We’re not in a nuclear crisis with North Korea—yet—and may not be for some time to come.

On the surface, the situation certainly seems dire. North Korea is much further along in its program than U.S. and allied analysts would have predicted. The Johns Hopkins School of Advanced International Studies project, 38 North, recently reported the Hwasong-15, “could deliver a moderately-sized nuclear weapon to any city on the U.S. mainland.” The missile is big by any standard and certainly bigger than anything the DPRK has ever launched before.

Moreover, analysts have also identified what they believe is a significantly more efficient steering mechanism on the first stage of this two-stage rocket. This new rocket could soon be coupled to a nuclear weapon. The Washington Post reported in August 2017 that the Defense Intelligence Agency had conducted analysis that year which showed North Korea had indeed achieved miniaturization of a nuclear warhead small enough to be deployed atop one of its ICBMs. Senior U.S. officials are understandably concerned. Gen. Robin Rand, the commander of Air Force Global Strike Command, when asked how far off U.S. estimates are of North Korean missile development stated, “We’ve got to get humping.”

But let’s pause here and take a collective breath. Despite these recent advances by Pyongyang, it’s vitally important to remember some of the most significant technological hurdles have yet to be cleared—putting the whole system together and making it work—when and how you want it to. This is rocket science, and it is hard.

What the DPRK does have:

1. A large, two-stage rocket that appears to have enough legs to reach any target in the continental United States

2. Some number of nuclear weapons. The exact number is debatable with expert predictions varying from fifteen bombs up to sixty bombs.

3. A number of tests, to include nuclear detonations and missile-flight tests

What the DPRK does not appear to have:

1. An ICBM with a proven track record of successful launches

5. A test range of sufficient length and instrumentation to simulate an intercontinental flight while tracking and measuring missile and warhead component performance

The DPRK has made great strides in missile and nuclear-weapons development. However, it’s less clear they have made similar advances in warhead miniaturization, reentry systems or missile guidance—in other words, on the components of an ICBM that are the most technologically challenging. As Terence Roehrig and I noted nearly five years ago: “All components on board must be rugged enough to survive the violent ride and the incredible amounts of shock and vibration imparted during the stage burns and get the weapon where it needs to be. Not to mention the fact that the weapon has to successfully reenter the earth’s atmosphere and be able to survive the extreme conditions subjected to it en route to its target.”

South Korea’s foreign minister agrees. Kang Kyung-wha told CNN in a recent interview, “They haven’t demonstrated their reentry capability. They haven’t demonstrated their remote targeting, or the miniaturization that is required to do this.” While Kang did admit the pace of development as worrisome, she added that “they have not reached the final completion stage yet.”

So how do the North Koreans reach this “final completion stage” and how soon can they do it? Even if we assume that North Korea can obtain all the materials required to continue missile testing and working on the reentry vehicle and warhead development, Pyongyang still needs to demonstrate the ability to pull the entire system together and make it function—reliably—from the boost phase, to stage separation, warhead separation, warhead reentry, arming and fusing and finally, to detonation. These are all complex, intricate systems that must work together with unforgivable tolerances in order to avoid complete failure. And they need a lot of testing just to ensure a modicum of reliability.

Testing, of course, brings its own unique set of problems. It does not appear that North Korea possesses a traditional flight-test range with critical tracking and instrumentation resources to sufficiently gather important data, so their scientists have a get a bit creative. Using lofted trajectories is one such method: By launching the missile on a very steep trajectory, it allows the stages to burn longer in an effort to replicate a much longer distance as well as gather data on reentry vehicle performance. While this makes it easier to determine the performance of missile stages, it’s not particularly helpful in analyzing reentry vehicle performance.

It is not yet clear that North Korea has successfully demonstrated a reentry system that could survive intercontinental distances. In August, The Diplomat reported that “North Korea’s ICBM reentry vehicles would likely perform adequately if flown on a normal trajectory to continental U.S. targets.” Other analysts aren’t so sure and point to the difference between lofted and full-range tests. Full-range tests, which more realistically replicate a missile launched on an intercontinental trajectory, subject the reentry vehicle to significantly longer periods of intense heat than lofted tests. That means the reentry vehicle must be robust enough to weather the heat on its outer shell while providing sufficient protection for the warhead inside.

In fact, the reentry vehicles on all three North Korean ICBM test launches have either not survived reentry or have been determined to be small payloads. As 38 North posted on November 29, 2017.

It is doubtful North Korea can fashion a nuclear weapon that weighs less than one hundred kilograms. It is also unlikely that North Korea has enough experience developing, testing and validating the technologies needed to build a reentry vehicle that weighs fifty kilograms and is capable of protecting the warhead during the high-temperature, high-stress environment as it descends through the atmosphere.

Additionally, as the DPRK’s ICBM program matures, testing becomes more complicated with more things that can go wrong—and more failures to follow. North Korean scientists likely face enormous pressure for continued success, and this, paradoxically, could hinder their progress. Like all hyper-centralized authoritarian system, the top leadership is deeply involved in the details of every important program, which often translates into “political meddling.” To wit, Kim Jong-un has regularly observed tests in person. This type of pressure can produce quick results on basic systems, but it is not conducive to a work environment where scientists and technicians can do their best work. It is especially deadly to the freedom to fail. Developing a nuclear weapons capability, even with help from outside, is not easy and is not quick. Failures and setbacks are commonplace requiring patience and tolerance throughout the organization, up to the very top. From what can be gathered in the very limited information coming from North Korea, it certainly does not appear that Kim Jong-un views patience as a virtue.

In any case, while Pyongyang’s ICBM development has been impressive, the North Koreans are now entering very difficult stages of development that are far more complex than their initial efforts. It is important not to underestimate North Korea, but it is just as important to remember that overestimating the country’s capabilities can be as dangerous. As Siegfried Hecker stated, “Overselling is particularly dangerous. Some like to depict Kim as being crazy—a madman—and that makes the public believe the guy is undeterrable. He’s not crazy and he’s not suicidal. And he’s not even unpredictable. The real threat is we’re going to stumble into a nuclear war on the Korean Peninsula.”

Hecker, and others who warn of accidental war, are right to be worried. But by taking a hard, realistic look at North Korea’s ICBM development, we can hopefully lower some of the current hyperbole, avoid rash decisions and use this time wisely to find an amenable solution.

Dana Struckman is a retired Air Force colonel and an associate professor of National Security Affairs at the Naval War College. On active duty, he was a missileer and also worked in ICBM testing and acquisition. Additionally, he commanded a U.S. ICBM missile squadron at Minot Air Force Base, North Dakota. The views expressed here are solely those of the author.