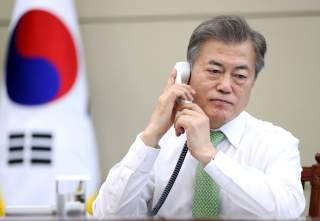 After decades of virulent anti-American rhetoric, the sound of cooing doves is now being heard from Pyongyang. In the first month since North Korea agreed to enter denuclearization talks, its leaders have made one major concession after another. Most notably, Kim Jong-un has agreed to shut down North Korea’s primary nuclear testing site in May and invite American and South Korean experts to give verification. He has promised to stop testing missiles and is no longer demanding that the United States remove its troops from the Korean Peninsula as a prerequisite to negotiations. Making such significant concessions unilaterally, before negotiations have started, is highly unusual. Typically, such concessions are made in the first phase of negotiations, as part of what is called confidence-building, in which each side expects and gains reciprocal concessions from the other.

There are those who believe that economic pressures, President Donald Trump’s threats, China’s squeeze and North Korea’s desire to finally improve the living conditions of its people have led Kim Jong-un to conclude that he should find a new way to ensure his stay in power—to trade his nukes for a nonaggression treaty with the United States. According to this view, Pyongyang’s sudden dramatic change of heart reflects Kim’s new strategy. I’d like to offer to those who believe in such a change several Brooklyn Bridges; all in mint condition and at a really good price.

North Korea cannot but notice that the United States has been less than strict in observing its commitments in treaties and international agreements. President Trump walked America away from the Paris accords, nixed the Trans-Pacific Partnership, demanded new terms for NAFTA and has thrown out the Iran nuclear deal. It is hard to believe that a regime, that for two generations made its people eat grass in order to become a nuclear power, will give up what it gained—for a treaty.

Nor can Kim Jong-un ignore what happened to the Qaddafi regime in Libya when it gave up its much more meager nuclear program—and to Saddam Hussein, even when it turned out that he did not have one.

So how is one to understand the peace offensive? I hold that it represents the essential third step in the development of a major nuclear power. In step one, North Korea had to develop the technology itself—nuclear warheads and delivery systems. Step two called for publicly testing the weapons to show the world that indeed it has become a nuclear power. This is about where North Korea was by the end of 2017. Since that time, the United States and its allies have stated, in no uncertain terms, that they would deprive North Korea its nukes, one way or another. Step three then—the peace offensive—serves to preempt such an attack. In other words, the United States and its allies surely cannot strike North Korea’s nuclear facilities if Pyongyang is loudly declaring its willingness to give them up through peaceful negotiations.

As talks unfold over coming months—it took more than a year to work out the deal with Iran—the world will become used to the fact that North Korea is a nuclear power. Thus, Pyongyang will seek to stretch these negotiations out for as long as possible. When the West finally realizes that the deal it envisions is a mirage, suddenly attacking North Korea—because it refused to accept some details during the last round of negotiations—will be much more difficult.

Trump is correct to state, as he did, that the United States will walk away from these negotiations if he feels that we are being played. However, expect the North Koreans to make such a disengagement as difficult as possible by stalling, moving the goalposts and dangling one promise after another. Hopefully this time Trump will stick to his position.

Finally, the United States should not repeat the mistake it made in dealing with Iran. President Barack Obama was so anxious to get a deal that he focused singularly on nuclear arms, setting aside Iran’s support of terrorist organizations and its use of armed force to undermine regimes in the region and to threaten U.S. allies. In dealing with Pyongyang, the Washington should focus not only on denuclearization of the peninsula, but also on stopping North Korea from selling its nuclear knowhow and hardware to other countries (as it did with Syria) and on neutralizing its stockpile of chemical weapons, the third largest in the world.

Enjoy the fine notes emanating from North Korea these days, but recall that when things sound too good to be true—they usually are.

Amitai Etzioni is a University Professor and Professor of International Affairs at The George Washington University. He is the author of Avoiding War with China and of Happiness Is the Wrong Metric: A Liberal Communitarian Response to Populism (Springer, 2018).