North Macedonia: A Name Agreement in the Age of Nationalism? 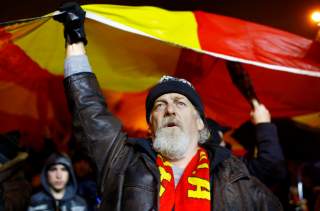 NATO kept its promise to keep the door open. Since yesterday, the small country in the Western Balkans, North Macedonia was formally invited to become its thirtieth member. This historical decision bears tremendous importance for the Republic of North Macedonia and its Euro-Atlantic path, for the future of the Western Balkans, but also for NATO itself and the strained transatlantic relations.

The accession protocol signed by all twenty-nine NATO members will be sent to the country’s parliaments for approval, a process that everyone is hoping to be finished by the end of 2019. Greece will be the first country to proceed with ratification tomorrow, a strong signal of political will and good neighborly relations, a sign that could be positively turn the tide in the much-troubled region of the Western Balkans. The Greek ratification of the protocol would signal the formal entry into force of the new name, and from that moment the “Republic of North Macedonia” will be used.

The End of a Twenty-Seven-Year-Old Dispute

What to many may rightly seem as a petty issue, the decision to change the name from “Macedonia” to “North Macedonia” involved a twenty-seven-year-old name dispute between Skopje and Athens. At the heart of this dispute lay the common questions of modern European history, nationalism, and difficult neighborhood relations.

When Macedonia declared independence 1991, the breakup of Yugoslavia was accompanied with a high surge of nationalism in the Balkans. Greeks fiercely objected to its neighbor’s use of Macedonia, worrying that the newly born country was appropriating Greek history going back to Alexander the Great, and claiming relations to the ancient Greek civilization of Macedonia, implying territorial ambitions over the northern region of Greece, fueled by the sort of nationalist claim of the first Macedonian constitution that the newly independent country was “a nation for all Macedonians.”

While Macedonia was referred internationally under the provisional of the “Former Yugoslav Republic of Macedonia” or FYROM, the name which entered the United Nations in 1993, internally it referred itself as “The Republic of Macedonia.” Later on, infrastructure projects for the makeup of the capital such as “Skopje 2014” launched by the VMRO-DPNE’s Gruevski, building statues of “ancient Macedonian figures and claiming that these represented the nation’s unbroken historical continuity since antiquity, added more fuel to the fire of nationalism, a danger tool in the Balkans, as history teaches us.

While the name dispute between Skopje and Athens included almost three decades of confrontation, it was emotionally charged on both sides, and involved the veto power of Greece that stalled the Euro-Atlantic integration of Macedonia. Despite the negative consequences for the stability and economic development of Macedonia, the dispute, on the other side, proved beneficial for corrupt politicians in the country which used it as a scapegoat for the lack of reforms and an excuse for weak development.

The tide turned at the end of 2016 after the landslide victory of the anti-Gruevski coalition, when the new prime minister, Zoran Zaev, promised a new era for Macedonian politics, based on good neighborly relations and Euro-Atlantic integration. As a result, the new agreement on the name issue between Skopje and Athens was reached in June 2018 on the banks of Prespa Lake, taking its symbolical name of “Prespa Agreement.” The nineteen-pages-long document signed the beginning of the end of the dispute. Full implementation required even more difficult steps.

Name Agreement in the Age of Nationalism?

The last several months did not prove easy for Athens and Skopje. The compromise was one of the most unlikely of the current era. In September 2018, the government of Skopje held a consultative referendum to bolster legitimacy for the necessary constitutional changes to make the new name official, but the low turnout (only 37 percent) not allowing the reach the required 50 percent to make it valid, put into doubt the future of the agreement. But, Zaev pushed ahead with the constitutional changes in the parliament claiming that those who had voted has sent a straight-forward message with more than 90 percent approval rate.

Few days ago, the Greek parliament ratified the deal to rename the neighboring Macedonia, in a narrow victory with only 153 votes out of 300, despite big internal political turmoil and widespread public opposition. It was a vote that brought splits in the governing coalition in Greece, and nearly toppled the Tsipras government. Against all odds, a new page was being written for the Balkans. In Tsipras worlds “the hatred of nationalism, dispute, and conflict will be replaced by friendship, peace, and cooperation.”

In an era when European politics is being reshaped by the resurgence of nationalism and fevers of public discontent, fueled by the 2008 Eurozone crisis and the 2015–2016 mass immigration waves, it seems that European politicians can take some lessons about political vision from the Balkans. While the political center is shrinking, and radical rebellion speaks about the need of politicians to understand better the needs of the populace, leaders need to exert visionary leadership, and not fall prey of the modern politics of engaging with the fears of the electorates, becoming simple followers of the public opinion. The lesson coming from the Balkans is that timing and strategic vision are everything. Now Tsipras and Zaev are in line to receive the Nobel Prize, following the example of the EU in 2012.

The Prespa Agreement should be used as a precedent on how issues and disputed need to be solved in the Balkans. There are plenty of emotionally charged tensions and disputes that need to be urgently addressed, starting with the most pressing one, between Serbia and Kosovo.

A Victory of the West

NATO future membership of North Macedonia, which had been waiting for it since 1999, places the country under an umbrella of stability and security, in a region that still has many pockets of uncertainty. It is also a strong signal that the alluring model of the West is strong and resilient in the Balkans, able to compete with the democratic values and prosperity offered by the transatlantic community. Russia, although is lacking a coherent strategy towards the region, has increased its presence as an opportunistic spoiler in the Balkans, as part of a bigger geopolitical game and meddling with the West. North Macedonia’s membership to NATO can be considered a setback for Russia, despite its nefarious interference in the name changing process, hoping to prevent this outcome, similarly to what happened with Montenegro one year ago. A new NATO country in the Balkans is key in stabilizing the region, strengthening the West’s foothold in the Balkans, and dealing with the malign influences of third actors.

Against the backdrop of enormous uncertainty, the leadership of the United States and the EU (mainly Germany) showed that positive change can happen in the Balkans, and direct and sustainable engagement pays off, leading to greater regional stability and integration.

The upcoming June European Council Summit that will discuss also enlargement of the Western Balkans should not repeat the mistake of last’s years missed opportunity to move the enlargement process into the much-deserved political level from the current technical one. This is easier said than done taking into consideration the upcoming European Parliament elections that might change the current optimism for the future of the Balkans. It goes without saying that the biggest burden of undertaking serious political and economic reforms relies with leaders and government in the region. They have to act soon to have a realistic chance for success.

Valbona Zeneli, PhD, is the chair of the Strategic Initiatives Department at the George C. Marshall European Center for Security Studies. The views expressed are those of the author and do not necessarily represent the views of the Department of Defense or its components.