Not RIP: How ISIS Is Going Virtual 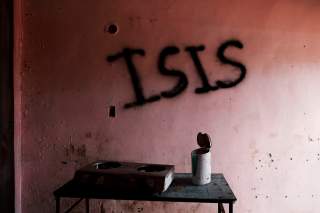 Abu Bakr Al-Baghdadi, the self-declared caliph of the Islamic State (ISIS) appeared recently in a short video to demonstrate he is alive, well and on duty. Gone are the days of his declaration of so-called Caliphate and control of territories in Iraq and Syria the size of Britain with a population of almost ten million. His modest attitude in the video was an attempt to revitalize his shattering organization with a message of thankfulness to those who lost their lives in defense of ISIS, his appreciation of the loyalties of Wilayahs (Provinces) and allegiance to their global cause. It is noteworthy that Baghdadi’s appeared right after the U.S.-supported Kurdish Syrian Democratic Forces captured the last territory of the ISIS in the Syrian town of Baghouz.

One is to take advantage of the chaotic situation in Syria and Iraq to lead the insurgency. The Western interest in fighting, which was mobilized against the territorial caliphate, has waned and the U.S. forces are packing to come back home. In addition to a pool of thousands of supporters, entrenched Sunni frustration in Iraq promises ongoing recruitment opportunities for ISIS. Moreover, Sunni frustration is mainly provoked by the Iranian-led groups’ sectarianism and the lack of effective governmental authority in Baghdad and Damascus.

However, Baghdadi’s second option is to sideline the idea of a territorial state but to re-organize the Islamic State into the structure of a virtual state with global franchises from Africa to Asia. There is also a high degree of possibility that ISIS can try both but would concentrate on the second option given its lessening competence for territorial control.

For instance, Baghdadi presented the Easter attacks in Sri Lanka as a response to losing the battle in Baghouz. He underlined the commitment from groups in Mali, Burkina Faso, the Western Sahara, Pakistan and Khorasan (Eastern Iran). The brochure in his video refers to West Africa, Somalia, Sinai in Egypt, Libya, Central Africa, the Caucasus and Turkey as the new Wilayahs. Additionally, ISIS later declared another Wilayah in Kashmir in India as the Wilayah of Hind. Even before these moves, ISIS was involved in most of the Jihadist terror in the West either in the form of directly executing such attack or by serving as a model of inspiration. Considering this capability in international terrorism, the following questions require urgent consideration. What would be the structure of non-territorial ISIS? What would be the new strategy of a virtual ISIS? Who will be its targets?

The counterterrorism strategy against virtual terrorism should spend serious thought on the question of “what ISIS can do.” The Islamic State does not hide that it has international support and a network of allegiances that tie lesser terrorist groups to it. This calls for a broader strategy on the emerging threat of the ISIS network. Remember that the failure against Al Qaeda at the outset was the absence of creative thinking about the use of the possible technologies and role of ideology. There is a need for forward-thinking that doesn’t completely depart from conventional and past analyses, but also does not impede new imaginations.

One should accept that there is a religious-ideological component in this struggle. This ideology excludes an overwhelming majority of the Muslims but includes the jihadists who serve its cause. After all, the Islamic State has killed more Muslims than any other faith groups. It is a well-known fact that there is strong opposition to ISIS ideology and practice within Muslim countries and populations. However, this strong opposition fails to put an end to ISIS-type radicalism in its own context.

The Islamic State lost the oil money and taxes imposed on the population under its control but is still capable of financing international terror attacks. As long as money pours to Syria and Iraq, probably in the form of reconstruction in the coming years, ISIS-affiliated groups will get their share through corruption. Furthermore, Islamic State recruits used cryptocurrencies, credit cards by false pretenses and the hawala system for financial transactions.

Another problem is that ISIS propaganda is widespread on Facebook, Twitter, YouTube despite social media outlets’ cooperation with the governments to remove its content in these platforms. It is becoming a more challenging task for the governments in an age of post–truth and private media to produce a counternarrative against the Islamic State. This is especially true in an environment where self-radicalization through online platforms has become a major challenge. There is also the destructive input of third parties on these platforms, such as from Islamophobia. Finally, the use of artificial intelligence and algorithms on both sides further complicates the situation.

The ISIS franchise system requires spreading a common psychology and mindset to affiliates in various geographies. Once Islamic State ideas and perceptions became guidelines to these affiliates, ISIS leadership will reach to a new level of operational capability in its dispersed structure. In due course, the Islamic State will not hesitate to direct or inspire war of attrition, mass casualties, destruction of critical infrastructures, targeted suicides, cyber terror, and other attacks.

The U.S. government and allies have enough resources to deal with the challenges of a non-territorial ISIS. Washington needs to work on the legal and political dimensions of counterterrorism as much as on the military and intelligence sides. There is no magic formula to counter the evolving terrorist threat, but America must see the necessity of a continuous will to fight, coalition-building and the endless search for counterterrorist narratives. The threat of a virtual Islamic State is a global issue. The strategy to counter it should match it at the same level; it should deliver a flexible and inclusive response with the ability to act in the pace of evolving threat.