A Not-So-Special Relationship: Why Britain is Becoming Divided Over the Atlantic Alliance 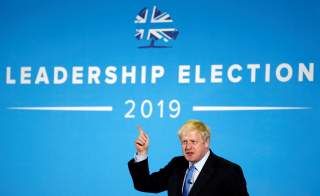 Is the Trump administration inept, clumsy, dysfunctional, unpredictable, and beset by internal divisions? According to confidential cables sent by Sir Kim Darroch, Britain’s former ambassador to the United States, the answer is yes. That assessment—a diplomat’s frank appraisal of his host government, never meant for public consumption—have now cost Darroch his job and plunged the Anglo-American relationship into one of its worst crises in recent memory.

Had Sir Kim’s memos been kept under wraps as intended, they would have been regarded as entirely unremarkable and appropriate by those privy to the contents. The leaked documents revealed nothing about the chaotic inner workings of the White House that isn’t already common knowledge. If anything, it would have been more surprising if Darroch had confided to his bosses back in London that the U.S. administration was humming along like a well-oiled machine.

What makes the Darroch affair so important is not the content of the leaked documents but rather the context of their release and the political reaction in London. Viewing the drama through this broader frame, it becomes clear that Anglo-American relations won’t be easily improved even with a new ambassador in place. On the contrary, Britain’s relationship with the United States is at risk of becoming a divisive partisan issue in domestic politics—something that will only worsen with Britain’s impending exit from the European Union.

Darroch’s ouster was an orchestrated hitjob. News reports suggest that whoever passed his cables along to the press was bent on forcing the ambassador to quit in order to make way for an envoy more eager to make a success of Britain’s future outside of the EU. And sure enough, hardcore Euroskeptics like Brexit Party leader Nigel Farage and Conservative Member of Parliament Bill Cash could barely conceal their excitement at the prospect of replacing Darroch, who formerly represented Britain in Brussels and is thought to be opposed to Britain’s exit from the EU.

The proximate cause of Darroch’s resignation was the refusal of Boris Johnson—the presumed successor to Prime Minister Theresa May—to rule out sacking the ambassador once he takes office. Johnson’s unwillingness to rebuke President Donald Trump caused outrage among the British establishment, including Tory members of Parliament, who are aghast at the sight of a would-be prime minister like Johnson—a former foreign secretary, no less—declining to give his full-throated support to a decorated diplomat like Darroch.

Yet there are compelling reasons for why Johnson refused to back Sir Kim. Not only had the ambassador’s position become untenable once President Trump had publicly denounced him, but Johnson will almost certainly want to forge a close relationship with Trump once he is safely installed in 10 Downing Street. Like other Brexiteers, Johnson has long touted the benefits of a bilateral trade deal with the United States to take effect once Britain has left the EU. And given the stock that Trump places in one-on-one relationships, it would have made little sense for Johnson to ostracize the president before even assuming the premiership.

Moreover, Johnson can comfortably absorb the short-term opprobrium of establishment figures—even from high-profile members of his own party—because his succession as prime minister no longer depends upon parliamentary opinion. Having already advanced to the final stage of the Conservative Party leadership selection process, Johnson now needs only to triumph in a vote of ordinary Tory members—most of whom are enthusiastic supporters of Johnson, Brexit, the transatlantic alliance, and even President Trump (according to a recent poll, no less than 54 percent of Tory members think that Trump would make a good prime minister of the United Kingdom). It is this pro-Trump, pro-Brexit base of grassroots Tory members that Johnson needs to make common cause with, not his colleagues in Westminster.

Taken together, all of this points to some powerful incentives for Johnson to elevate the health of his personal relationship with President Trump over the cries of impropriety and accusations of sycophancy coming from his domestic detractors. Staying close to Trump is a priority for Johnson, a move that he believes will allow him to shore up Britain’s international position in a post-Brexit world while also cementing his popularity with Tory activists.

On its face, this could be construed as good news for the Anglo-American “special relationship.” To plagiarize a phrase, Trump could have shot Sir Kim Darroch in the middle of Fifth Avenue and he still would have enjoyed the loyal support of Britain’s next prime minister. Perhaps, then, the lesson of Darroch’s indecorous treatment is that the special relationship is as robust as ever—at least when it comes to measuring Britain’s leaders’ eagerness to please Washington.

The only problem is that not everybody in Britain faces the same political calculus as that which guides Johnson. Indeed, Labour leader Jeremy Corbyn faces the exact opposite set of political incentives: Trump is so much reviled among Labour voters that Corbyn felt at ease speaking at an openly anti-Trump rally when the president visited London in June—an unprecedented move for an opposition leader and prime minister-in-waiting. Far from wanting to side with Trump against Darroch, Corbyn’s spokesperson wasted no time deriding Johnson as a “patsy” for his obsequious behavior towards Trump.

There are thus two camps emerging within British politics when it comes to transatlantic relations: Johnson and other top Tories have pinned their hopes on working closely with the Trump administration while Corbyn and leading Labour figures like London Mayor Sadiq Khan have tacked in the exact opposite direction. This incipient dividing line suggests that Britain’s relationship with United States could easily turn into a position issue in British politics—that is, a topic on which contenders for power take opposite stances in an effort to distinguish themselves from one another. If the divide continues to deepen, then it would represent a major shift in how the transatlantic alliance has traditionally been dealt with in British politics and would constitute a long-term threat to one of the Western world’s most critical partnerships.

In the short term, the new politics of the special relationship will be felt most keenly when it comes to trade talks. Johnson will surely want to rush ahead with a U.S.-UK trade deal if he is installed in 10 Downing Street, but Corbyn stands to gain from painting the United States as a predatory economic actor. If any trade deal comes close to fruition, then the Labour frontbench will lambast Trump as a rapacious capitalist whose only interest is in exploiting Britain during a time of weakness. The Liberal Democrats and Scottish National Party will happily join in, and they will find ready support among a general public that has been primed to fear chlorinated chicken flooding British supermarkets, U.S. firms buying up portions of the state-run National Health Service, and the prospect of a damaging race-to-the-bottom on workers’ rights and environmental regulations.

In the longer term, the risk of hostility towards Trump (and the United States more generally) metastasizing into something fatal to the transatlantic relationship cannot be discounted. For decades, leaders from both of Britain’s major parties have agreed on the importance of a security partnership with the United States. So has the general public. Economic ties have been strong, too, but Britain’s trade policy has long been handled by EU negotiators—never something that needed to be litigated in domestic politics. In hindsight, the decoupling of these issue-areas looks to have been an important reason for the special relationship’s health and durability.

The most optimistic supporters of Britain’s exit from the EU used to be confident that a trade deal with the United States could be finalized in a matter of months. They were wrong. Leaving the EU is making it harder, not easier, to deal with officials in Washington because an isolated London finds itself lacking in bargaining power and pulled apart by rival factions. The insertion of economic questions into bilateral conversations has not ushered in a new era of closeness but rather sowed the seeds of domestic division over how to approach the entire bilateral relationship.

From this perspective, the Darroch affair is but a taste of what is to come: not a closer relationship between two “cousins across the ocean” but a highly divisive set of bilateral relations that lack stable foundations on the British side of the Atlantic if not both. The problem will be worse for as long as Trump occupies the White House because he is such a polarizing figure abroad. But it will surely outlast him, with major consequences for both countries.