This Is Not Your Parents' Caribbean 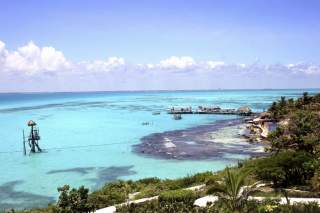 The Caribbean is restless. Change is coming from multiple directions, driven by a thawing of U.S.-Cuban relations, Puerto Rico’s debt crisis, and the decline of Venezuela’s regional influence related to a precipitous drop in global oil prices and a growing Chinese presence. Additionally, the pending rise in U.S. interest rates could squeeze a number of countries already struggling with high debt levels and large fiscal deficits, while the stronger U.S. dollar could erode competitiveness in tourism vis-à-vis Europe. Add to this local concerns over economic competitiveness, high levels of crime related to the international drug trade, and austerity measures in a number of countries, people in the Caribbean have a right to be restless and there is a likelihood that conditions are going to get worse before they get better.

The most significant geopolitical change for the Caribbean is the thaw between Washington and Havana. On July 20, 2015, Cuba and the United States reopened embassies in each other’s capitals for the first time in decades. Although considerable work needs to be done to fully normalize relations between the two countries, Cuba’s coming in from the cold represents considerable opportunities for U.S. corporations long prohibited from conducting business with the island-state. Where U.S. companies were not permitted to trod, Canadian, Asian and European firms were quite happy to take advantage. This is changing and that is for the better.

For Cuba, the thaw with the United States makes sense. Cuba has considerable needs for investment, especially to upgrade its creaky infrastructure in such areas as roads, telecommunications and ports. This costs money, something that Cuba lacks. During the Cold War, the Caribbean country benefited from massive Soviet economic assistance, but this ended in 1992 and resulted in hard times for Cuba during much of the 1990s.

Cuba’s economic revitalization in recent years (such as it has been) was greatly helped by Hugo Chavez’s election as president of Venezuela in 1999. An ardent admirer of the Cuban Revolution, the Venezuelan leader benefited from the rise in global oil prices, which allowed him to provide substantial assistance to the neighboring island economy. With Chavez’s death in 2013 and the steep plunge in oil prices since mid-2014, Venezuela’s ability to help Cuba has declined. Indeed, Venezuela’s economy lurched into its own severe crisis over the past two years.

The Cuban-U.S. rapprochement opens the door to potential new injections of capital into the Cuban economy. This shift in Cuban policy has been partially a result of the aging of Fidel Castro and more pragmatic approach by his brother Raul who assumed control in 2006. Under Raul there has been a partial liberalization of private enterprise, homeownership and foreign investment rules. To be certain, Cuba is a long distance to being a market-oriented economy.  What has been done thus far are tentative steps in the right direction. Cuba’s leadership, however, appears to understand that they need to continue to move in their opening up of the economy.

Cuba represents a major challenge for the rest of the Caribbean. Before the Cuban Revolution in 1959, the island-state was a major destination for U.S. tourists and businesses. The normalization in relations raises concerns that trade and investment options for the rest of the Caribbean may well end up going to Cuba. What Cuba gains could be what Barbados, the Dominican Republic and Jamaica loses.

The potential risk from Cuba must be observed from the perspective of the fragile nature of economic growth in the Caribbean. The period following the Great Recession of 2008 has been challenging, though conditions have improved over the last two years. This has been driven by more robust tourism inflows (helped by U.S. economic growth), lower transport costs and cheaper oil. According to the International Monetary Fund (IMF), in 2014, the average growth for tourism-dependent Caribbean countries expanded by 1.5 percent, the highest level since 2007. In 2015, the forecast is around 2.0 percent, led by the Bahamas and Jamaica.

The outlook for commodity-dependent Caribbean economies Belize, Guyana, Suriname and Trinidad and Tobago is a little more uncertain considering the sharp decline in commodity prices.

Despite the positive traction in tourist-related growth, the Caribbean confronts substantial challenges. The IMF notes that while the economic recovery can be expected to continue, “…external, fiscal and financial vulnerabilities remain high in several economies.” Along these lines, the average current account deficits of tourist-dependent economies are expected to be more than 15 percent of GDP in 2015. Commodity-dependent economies are lower at 6 percent of GDP, high, but more manageable than their tourist-dependent neighbors.

Debt levels are also high throughout much of the region. Jamaica has been forced to restructure its debt and suffered through years of oftentimes harsh structural adjustment. In 2012-13 Jamaica’s debt to GDP was 146.5 percent of GDP, one of the world’s highest; in 2013-14 it fell to 141.6 percent and is projected to fall over the next several years to under 100 percent. This has come at considerable cost and sacrifice.

While Jamaica has made progress in dealing with its heavy debt burden, other countries face similar challenges. According to the IMF, these economies on average carry a debt burden in excess of 90 percent of GDP. Commodity-driven economies are in better shape, at an average of 56 percent of GDP.

Probably the most evident problem with debt is Puerto Rico, which owes creditors $72 billion. Puerto Rico is not a state, but a Commonwealth; being part of the United States, but not having voting representation in the U.S. Congress. This special status allowed it to tap the U.S. municipal bond market. With more people in the United States retiring every year, the pressure mounted on mutual funds to provide more yield for the newly retired. Puerto Rican bonds were appealing as their higher level of risk gave them more yield, but were still rated investment grade meaning they were not considered speculative. For many investors the view was as part of the United States, what could go wrong in Puerto Rican municipal bonds?

Puerto Rico’s economic fundamentals have eroded over the years—changes in the island’s tax code (courtesy of the U.S. Congress) took away competitive advantages for businesses to locate there, manufacturing declined, tourism struggled to make up losses in tax revenues and jobs, and many Puerto Ricans have left for better opportunities in the United States. In 2014, questions over Puerto Rico’s ability to pay emerged and in August 2015 one of its agencies defaulted on a debt repayment. Unable to declare bankruptcy and unable to repay its debt, Puerto Rico has lurched into a profound debt crisis.

Puerto Rico raises a delicate question as to U.S. commitment to the Caribbean. After all, Puerto Rico is technically part of the United States, albeit a Commonwealth. It is difficult not to notice that the Obama administration did little beyond provide technical assistance to the struggling Puerto Rican government, while the Republican-dominated Congress was quite happy to depart from Washington for summer recess without passing any legislation that might have helped the island resolve its problems. The message sent to the Caribbean—the region lacks geopolitical importance in Washington.

Beyond Puerto Rico, U.S. policy in the Caribbean has been pushed by two other factors, China and Venezuela. The former has played a much active role in the Caribbean in recent years, while the latter is in the throes of a self-induced economic crisis. Venezuela’s main instrument of influence was Petrocaribe, which sold oil to neighboring Caribbean and Central American countries at a discount. However, oil prices have fallen and Venezuela’s economy has wilted under an extended period of mismanagement and political turmoil. Caracas is no longer able to play the oil Santa Claus that it was, leaving China as the main rival of the United States in the region.

China has been active building cricket stadiums, power plants and renovating hospitals. In Cuba, it has invested in nickel processing and drilled for oil off the coast. China is a member of the Caribbean Development Bank; the United States is not. In the Bahamas, China’s export-import bank helped via a $2.4 billion loan in the construction of the Baha Mar resort project, which was being built by China Construction America Inc.

China has also been involved in discussions in Nicaragua over a new canal to link the Pacific and Caribbean, which would no doubt have an impact on Caribbean economies. China has made what could be long-term gains in the Caribbean, playing a role in local development and functioning as a counterweight (to a degree) to the United States, which often slips into periods where the region disappears from the foreign policy agenda.

The United States has not been lacking a response, albeit it has come late in the day. In 2014, the Obama administration launched the Caribbean Security Energy Initiative, aimed at luring Caribbean nations away from Venezuelan oil. In January 2015, Vice President Joe Biden hosted Caribbean leaders in Washington to discuss alternative energy ideas, such as solar and wind, both of which islands in the region have in abundance.