Now Is the Time for a Crackdown on Narco-Trafficking 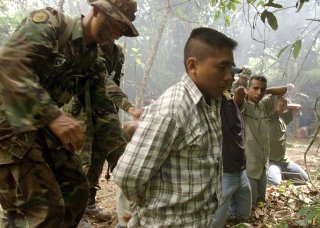 Despite the Coronavirus outbreak, South American and Dominican drug traffickers continue to flood the United States with illicit drugs.

In late April, law enforcement agents intercepted five cocaine-laden bags at the Dominican Republic’s Las Americas International Airport. The shipment, which had arrived from Venezuela, was reportedly bound for the United States. In late March, the Colombian Navy intercepted a narco-submarine en route to the United States loaded with a ton of cocaine. This watercraft was the twelfth of its kind to be captured since the coronavirus became a threat in December 2019.

In an effort to apply pressure on South American drug cartels and Venezuela dictator Nicolás Maduro's regime, the U.S. Department of Justice recently indicted Maduro and fourteen members of his inner circle for narcoterrorism. But to truly crackdown on drug trafficking stemming from South America, however, the White House must turn its attention to the strategically-located Dominican Republic. This tiny, poverty-stricken country is the South American drug cartels’ supreme transit route in the Caribbean.

During the past fifteen years, drug trafficking has rocketed to levels the Dominican Republic had never seen before, explains Atención País political commentator José Marte Piantini. More than 120 tons of cocaine pass through this country every year. To get this cocaine to American communities, drug lords have been partnering with Dominican officials for decades. In late 2019, the U.S. Treasury Department identified César Emilio Peralta, a.k.a “Cesar el Abusador,” as a major drug trafficker under the Kingpin Act, highlighting the fact that Peralta was responsible for trafficking tons of cocaine and opioids into U.S. territory. Political commentators Ricardo Nieves, Domingo Páez and Marino Zapete said that, for more than two decades, Peralta’s criminal activity in the Dominican Republic boasted government and military backing “at the highest levels.”

U.S. law enforcement agencies, the Central Intelligence Agency, and the National Directorate for Drugs Control (DNCD) failed to capture Peralta in a joint operation in August 2019 in Dominican territory. Peralta escaped after being “tipped off by powerful government officials,” Nieves and Páez revealed, allegedly linked to the country’s Attorney General’s Office. Carlos Rubio, a former intelligence officer, argues that the highest echelons of Dominican Republic President Danilo Medina’s government (2012-present) protected, and profited from, Peralta for years. Peralta was captured in Colombia in December 2019.

Former drug baron Quirino Paulino Castillo, a.k.a. “El Don,” said in February 2015 that he donated approximately US$4.6 million to former Dominican president Leonel Fernández’s 2004 presidential campaign. Castillo claimed that ex-president Fernández (1996–2000, 2004–2012) knew the money was from drug trafficking. Drug Enforcement Administration (DEA) and DNCD agents arrested Castillo in the Dominican Republic in December 2004 with 1,387 kilos of cocaine. He was subsequently extradited to the United States and accused of trafficking over thirty tons of cocaine into U.S. soil.

Since the early 2000s, José Figueroa Agosto, a.k.a “Junior Cápsula,” conspired to import tons of cocaine into U.S. territory mainly from the Dominican Republic, revealed the DEA. After escaping U.S. authorities in 1999, Agosto fled to the Dominican Republic, where he established his drug empire. Agosto allegedly had high-ranking political figures and military members on his payroll. His influential political and military connections issued him a valid identification card from the National Department of Investigations, which is the counterpart of the CIA in the Dominican Republic. This official identification card gave Agosto free rein to cruise the country and authority to operate undetected. Agosto was arrested in Puerto Rico in July 2010.

Arturo Del Tiempo Marqués lived in the Dominican Republic from 2005 to 2010. A Spanish citizen, who enjoyed the highest consideration of ex-president Fernández, the Dominican Liberation Party (PLD) and former Dominican National Police chief Guzmán Fermín, Marqués’ high-level law enforcement and political connections made him honorary colonel of the Dominican National Police and secured him a $13 million loan in three days from the Dominican Republic Reserves Bank, flouting the country’s banking laws. Marqués was detained with 935 kilos of cocaine in Dominican soil in 2009 but was ipso facto released due to his vast political influence. Marqués was later arrested in Spain in March 2010 and sentenced to seven years for trafficking 1,213 kilos of cocaine and money laundering.

More than seven hundred thousand Americans have died of drug overdose since 1999. Americans spend over $100 billion a year in cocaine, marihuana, heroin and methamphetamine. Recently, Time Magazine referred to the current opioid crisis as “the worst addiction epidemic in U.S. history” and the Guardian stated that the growing drug crisis is “killing more Americans than ever.”

Maduro’s indictment has created the momentum for the White House to deal a global-scale blow to drug trafficking. To accomplish this, the White House must treat narco-states like Venezuela and the Dominican Republic equally, irrespective of their geopolitical alignment.

Given the Dominican Republic’s central role in the global drug trade and the devastation generated by the drug epidemic in the United States, the White House must take a hard look at the criminal activity that transpires within this country’s governmental apparatus. The White House must hold to account high-ranking government officials and military members who have partnered with drug lords to flood the United States with illicit drugs.