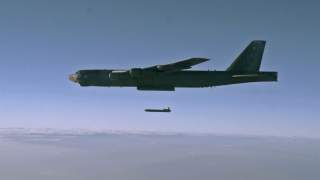 In a recent article by former Secretary of Defense William Perry (1994-1997) and Assistant Secretary of Defense Andy Weber (2009-2014), the two men urge President Obama to kill the Air Force program to develop and field a replacement for the AGM-86 nuclear air launched cruise missile (ALCM). The long range standoff cruise missile (LRSO) is expected to be able to evade advanced radar with its stealthy airframe and will be far more accurate. While I appreciate their insights, the problem with Perry and Weber’s argument is that it relies on questionable assertions that are simply unproven and untrue.

For those carefully watching the defense cuts Britain’s Ministry of Defense has faced in recent years, the debate that took place concerning the affordability of the British nuclear arsenal was as bitter as the debate over cuts to its conventional forces. To save the submarine-based deterrent while also fielding a new submarine, giving up the cruise missile was a necessary trade-off.  Prime Minister Cameron did not make the decision to forgo a nuclear cruise missile because he or his cabinet believed it to be a destabilizing weapon. It came down to a lack of cold hard cash.

Perry and Weber also suggest that U.S. President Ronald Reagan supported banning nuclear ground launched cruise missiles (GLCM) in Europe because he viewed them as destabilizing. This assertion does not stand up to scrutiny.

During the Oct. 13, 1981, National Security Council meeting, then-Secretary of Defense Casper Weinberger suggested that the United States pursue a “zero option,” which would ban all intermediate range ballistic missiles and ground launched cruise missiles. President Reagan responded to this suggestion, “Do we really want a zero-option for the battlefield? Don’t we need these nuclear systems? Wouldn’t it be bad for us to give them up since we need them to handle Soviet conventional superiority?”

The simple fact is that nuclear cruise missiles are no more destabilizing than other weapons. The United States currently has the fewest types of nuclear weapons and delivery systems in the history of its arsenal. Given the small size of the nuclear arsenal and the types of delivery systems, the United States is more susceptible to strategic surprise (i.e. development of game changing technology) than it has been at any point since the development of nuclear weapons.

During the 1950s and 1960s, the U.S. Army’s nuclear force was greater in the variety of nuclear weapons and delivery systems than the United States’ entire current force. Yet, during that period, the Soviet-American nuclear standoff remained largely stable. Thus, Perry and Weber’s argument that a dual use weapon—like a cruise missile—is destabilizing because an adversary will not know which of the two variants (conventional or nuclear) is headed toward them is simply incorrect. Russia and the United States have a long history of facing and fielding weapons that have a nuclear and conventional variant.

The larger mistake Perry and Weber make is that they fail to understand that the United States and Russia have entered into a Post Post-Cold War. The period of relative stability in the Russo-American relationship that followed the collapse of the Soviet Union is now over. Whether they like it or not, President Vladimir Putin is seeking to reassert Russian influence in the Near-Abroad and those countries that were aligned with the Soviet Union. As a result of this increasingly bellicose Russian foreign policy, nuclear weapons are more relevant today than they were a decade ago. Given Russia, China and North Korea’s ongoing efforts to develop and field advanced nuclear weapons and delivery systems, the United States would be negligent if it failed to develop the LRSO.

Nuclear cruise missiles provide a number of advantages that Perry and Weber overlook. First, the reality of employing cruise missiles is that they require far less logistical and planning support and can fly profiles that no bomber can fly. This enables the United States to employ ALCMs in degraded environments that a bomber required to penetrate enemy airspace would not be able to fly.

Second, ALCMs will save the lives of American aircrews. They will do this by penetrating enemy airspace that would put both the B-52 and the B-2 at great risk. Should an ALCM be lost to enemy IADS, the loss is considerably less than if an American bomber were lost over enemy territory.

Lastly, Perry and Weber are incorrect to suggest that the B-2 alone can effectively serve as the air-based leg of the nuclear triad. The current fleet of B-2 bombers consists of sixteen operationally available aircraft, with a fraction of these aircraft available to fly missions at any given time. Given such small numbers, B-52 launched cruise missiles play a central role in sustaining the credibility of American deterrence.

With the United States facing the prospect of modernizing all three legs of the nuclear triad over the next twenty years, long time advocates of cutting the nuclear force to minimal levels see an opportunity to make significant gains in the reduction of both nuclear warheads and delivery systems. Our adversaries do not see such efforts as an attempt to make the world a safer place. They see it as weakness. As Donald Rumsfeld once said, “Weakness is provocative.”

Adam Lowther serves as the Director of the School of Advanced Nuclear Deterrence Studies at Kirtland Air Force Base.  His views are his own.