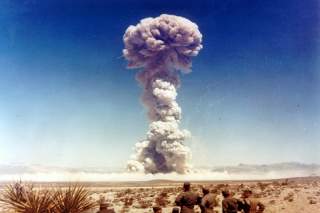 For over five decades, every Republican and Democratic administration has rejected minimum nuclear-deterrence policies and corresponding calls for the reduction of the U.S. arsenal of nuclear weapons down to a range of “several” weapons to hundreds. This decades-long rejection of minimum-deterrence nuclear policies reflects a rare enduring bipartisan consensus.

Those few Democratic and Republican presidents who have entered office with some expressed interest in minimum-deterrence policies have been sobered by reality and backed away from them. Most famously, President-elect Jimmy Carter began his discussions with the Joint Chiefs of Staff by inquiring if U.S. nuclear-deterrence responsibilities could be met by an extremely small number of forces. Before the end of his term, however, President Carter endorsed robust U.S. nuclear policies, including Presidential Directive-59, which emphasized the U.S. need for multiple nuclear options and flexibility and established the basic direction for the subsequent Reagan administration’s nuclear policies and programs—a far cry from minimum deterrence.

However, the Department of Defense’s 2013 unclassified Report on Nuclear Employment Strategy of the United States notes specifically it has rejected a “minimum deterrence strategy.” Instead, President Obama and Defense Secretary Hagel committed to a comprehensive modernization program for U.S. nuclear forces. These developments have led advocates of minimum deterrence to ask, “What went wrong?”

In fact, the consistent official rejection of minimum-deterrence arguments is a reassuring sign that Washington can, on an enduring and bipartisan basis, get it right. How so? For decades, minimum-deterrence proponents have made roughly the same canonical claims and assertions in favor of their preferred policies with little reference to evidence. This may be because when actual evidence is brought to bear vis-a-vis minimum-deterrence claims and assertions, it becomes readily apparent that they are demonstrably false or contrary to abundant available evidence. Minimum-deterrence proponents continue to make the same set of arguments, but the cat is now out of the bag with regard to the demonstrable lack of veracity underlying minimum deterrence—regardless of the rank or credentials of the persons advocating therefor.

For example, minimum-deterrence proponents claim that their favored low number of nuclear weapons—whether “several” or hundreds—surely will be adequate for U.S. nuclear-deterrence purposes, and moving to much lower nuclear-force numbers will provide numerous benefits. Underlying this claim are the following arguments: 1. very few nuclear weapons are adequate for U.S. deterrence purposes because societal targets are so vulnerable to nuclear weapons that few U.S. weapons are sufficient to deter opponents with the threat of great societal destruction; 2. U.S. nuclear weapons are useless to counter the priority post–Cold War threat to the United States—nuclear terrorism; 3. the Cold War is over and will not return, so deep U.S. reductions are now in order; 4. superior U.S. conventional threats can substitute largely or entirely for U.S. nuclear forces for the purposes of deterring enemies and assuring allies; 5. U.S. nuclear weapons should have the “sole purpose” of deterring nuclear attack on the United States; other purposes that suggest the need for additional nuclear forces should be rejected as so much Cold War detritus; 6. deep reductions in U.S. nuclear forces will save billions of dollars in defense spending and help promote nonproliferation by providing exemplary U.S. behavior to the world; and 7. reducing the number of nuclear weapons will reduce the probability of accidents and other nuclear dangers.

The assertions/arguments underlying this popular minimum-deterrence narrative are, as noted, demonstrably false or contrary to considerable available evidence. Briefly reviewing each in turn demonstrates this point.

Most importantly perhaps, is the unarguable fact that minimum-deterrence proponents do not and cannot know that their preferred level of U.S. nuclear weapons—whether “several” or hundreds—will be adequate for U.S. deterrence purposes. They do not have even a credible basis for estimating the probability that their preferred number will be adequate for deterrence, now or in the future. Why not? Because it is the unique opponent that decides whether it will or will not be deterred, and minimum-deterrence proponents do not and cannot know if the type of deterrent threat they recommend will cause opponents to decide to be deterred, now or in the future. Their constant promises in this regard are wishes masquerading as truths.

It is true that few nuclear weapons may be needed to threaten a small number of unprotected societal targets, such as cities and infrastructure. But it does not, therefore, follow that threatening an opponent’s societal values is an effective basis for U.S. deterrence purposes. By definition, deterrence requires threatening those values opposing leaders hold dear, and those may not be the Western-oriented societal values that minimum-deterrence proponents assume foreign leaders hold dear. On occasion, opponents have placed highest value on other types of potential targets, such as numerous hardened and otherwise well-protected political and military assets. Threatening these for deterrence purposes may easily place greater demands on the number and types of U.S. nuclear forces than does minimum deterrence.

The minimum-deterrence focus on deterrence threats to opponents’ societal targets works well if the goal of U.S. policy is to find a rationale for reducing U.S. nuclear forces. However, a primary goal of U.S. nuclear capabilities, well appreciated by U.S. leaders and allies, is to deter attacks on the United States and allies, now and in the future. This latter goal may demand U.S. nuclear forces that do not fit within the limits typically advocated by minimum-deterrence proponents. Rather, it may require an arsenal of sufficient size and resilience to adapt to a diverse spectrum of current and prospective threats.

Next, it simply is untrue that U.S. nuclear weapons cannot help counter the potential threat of nuclear terrorism or that, because the Cold War is over, U.S. nuclear forces are now irrelevant to U.S. relations with Russia and China, and it is past time to reduce the U.S. Cold War nuclear arsenal. In fact, the United States hopes to deter countries such as North Korea, or prospectively Iran, from transferring nuclear weapons to terrorist organizations, and U.S. nuclear capabilities may well play in to that deterrence effort. Furthermore, Russia appears to be reaching levels of open hostility unmatched since the worst of the Cold War, including an ongoing, comprehensive nuclear and conventional force buildup, forcibly changing borders and occupying territory in Europe and issuing explicit nuclear threats to key U.S. allies. China is pressing close U.S. ally Japan to the point that Japanese leaders have expressed an expectation of war and compared the situation in Europe immediately prior to World War I.

In the face of these facts, to claim that U.S. nuclear deterrence is irrelevant to U.S. relations with Russia and China, now and for the future, is a breathtakingly optimistic hope masquerading as truth. Finally in this regard, the frequent claim that the United States continues to maintain an outsized Cold War nuclear arsenal simply ignores the fact that the United States already has reduced its deployed nuclear weapons by over 85 percent; minimum-deterrence proponents now set their sights on the remaining 15 percent.

Next, it is true that on some occasions, superior U.S. conventional threats may substitute largely or entirely for U.S. nuclear forces for the purposes of deterring enemies and assuring allies. However, on other occasions, the United States may not have the assumed conventional-force advantages expected to deter. Perhaps more to the point, two thousand years of history prior to the nuclear age demonstrate another unarguable fact: conventional deterrence fails periodically, often unexpectedly and with catastrophic consequences—witness the combined hundred million fatalities of World Wars I and II. Understandably, therefore, key allies have repeatedly voiced their belief that U.S. conventional forces alone are inadequate for their assurance. This vexes minimum-deterrence proponents, but for assurance purposes, it is allied beliefs that matter. The minimum-deterrence claim that U.S. conventional forces can now somehow provide the needed reliable deterrent and assurance effects is a wish that is contrary to much evidence.

Next, the claim that U.S. nuclear weapons should serve the “sole purpose” of deterring nuclear attack on the United States, and, therefore, can be reduced further, ignores some key inconvenient facts. First, biological and chemical weapons (weapons of mass destruction—WMD) reportedly are in the hands of some potential opponents and it is wholly unclear whether U.S. conventional forces alone would be adequate to deter WMD attack. Past U.S. officials were willing to forego these forms of WMD on the assumption that the United States would retain nuclear weapons to help deter WMD attack by those states that openly or surreptitiously refused to give them up. “Sole purpose,” as recommended by minimum-deterrence proponents, would leave the United States without nuclear deterrence for this purpose and, as is noted above, an undisputed historical truth is that conventional deterrence fails periodically, surprisingly and catastrophically.