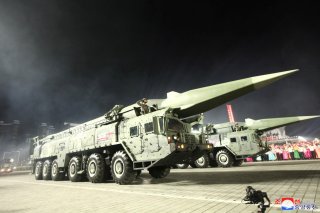 Kim Jong-un’s ambitious vow to preemptively use North Korea’s nuclear weapons to defend its “fundamental interests” has understandably drawn much attention in both Washington and Seoul. Experts have warned of a change in Pyongyang’s nuclear strategy, suggesting such a development to have significant implications for regional stability. However, some of these analyses have failed to provide meaningful policy alternatives due to being based on a theoretically and practically weak foundation.

Pessimists, for example, warn that North Korea is “working on a program which will one day make conquest possible—conquest of the South.” There is always a positive probability greater than zero that this will occur, although such a scenario is unlikely to happen as long as the U.S.-Republic of Korea (ROK) military alliance serves to deter North Korea’s provocations. Indeed, any North Korean invasion would trigger devastating joint retaliation on the part of the alliance, especially given the substantial U.S. civilian and military presence in South Korea.

Optimists, however, claim that North Korea just focuses on protecting itself from America, and thus, the United States should facilitate cooperation with North Korea. Yet, such an analysis overlooks the fact that Pyongyang must maintain a hostile external environment to justify the regime’s rule. Thus, as Kim stated in his speech, North Korea will likely pursue a strategy that leverages its nuclear capabilities to achieve its political objectives.

The reason why the above analyses fail to provide substantial insights lies in the fact that they do not convincingly explain the substance of North Korea’s national interests—which Kim has said he would use nuclear force to defend. Therefore, understanding North Korea’s core national interests is critical when it comes to predicting how its nuclear strategy will evolve.

The Charter of the Workers’ Party stipulates North Korea to have two immediate national objectives, the first of which is to build a strong country on the northern half of the Korean Peninsula, that is, the North Korean region. The second goal is to establish a socialist state that encompasses the entire Korean Peninsula, including South Korea, which entails both liberating the South Koreans from perceived American imperialism and building a unified communist country.

The Kim family’s significance in relation to achieving these national objectives must also be emphasized. The Juche ideology, that is, the self-reliance principle that underpins North Korea’s vision of state and society, holds that the Kim family’s leadership represents the only means of successfully carrying out the socialist revolution, defeating the United States, and unifying the Korean Peninsula. Thus, in North Korean politics, Kim Jong-un is more than a dictator; he is a leader who directs the souls of North Koreans toward accomplishing their revolution.

The key issue here concerns when North Korea perceives its core interests to be threatened. As North Korea’s core national security interests are linked to the existence of Kim’s regime, the situations in which Pyongyang perceives its core interests to be threatened may be more extensive than would otherwise be the case. In other words, the potential threats not only include external military threats to the state, but also external and internal situations that could undermine the legitimacy of the regime.

As a result, what North Korea refers to as deterrence is not only a measure for preventing an adversary from launching a preemptive attack on its homeland, but also a means of defending the Kim regime. The North’s conception of deterrence, therefore, includes elements of compellence that create an external environment intended to enhance the legitimacy of the regime or coerce neighboring countries into accepting the situation as Pyongyang wishes.

In fact, North Korea has used its military for this dual purpose for the past seventy years. The first aim in this regard has been to deter an invasion by the U.S.-ROK alliance, while the second has been to maintain and, sometimes, strengthen the legitimacy of the Kim regime. As a result, North Korea’s military-strategic approach has long been close to a so-called “escalation control“ strategy—Pyongyang achieves its desired political objectives by engaging in carefully calculated provocations that fall below the threshold for U.S. retaliation and, therefore, limit the risk of all-out war.

As Kim Jong-un explicitly stated in his speech, North Korea could use its nuclear weapons in the same way as it has used its military power to defend its core interests and deter a major war. This implies that North Korea manages to deftly employ or threaten to employ nuclear weapons to achieve its political objectives while staying below the threshold for U.S. nuclear retaliation. While North Korea is unlikely to drop nuclear bombs on South Korea, its nuclear weapons can be used in such a way that maximizes the effect of coercion through causing similar levels of fear to an actual attack.

What Can Be Done?

This apparent shift in the strategic environment poses a number of significant challenges for national security planners in both Washington and Seoul.

First, it is critical that national security planners develop scenarios in which North Korea could employ or threaten to employ its nuclear weapons. North Korea is likely to engage in various levels of controlled nuclear provocations in an effort to achieve its desired political objectives. The key issue is determining the strategies that North Korea will choose to employ under different conditions. Identifying these different options and triggering conditions is critical to ensuring effective crisis management.

Second, various means of response or retaliation are required. Some argue that since North Korea has developed nuclear weapons, South Korea should develop its own nuclear weapons, or else the United States should redeploy its tactical nuclear weapons on the Korean Peninsula. However, in light of North Korea’s current nuclear strategy, neither option may prove very effective. North Korea would likely attempt to achieve its objectives through controlled provocations, rather than through engaging in an all-out nuclear war. The reliance on nuclear options may indicate that the U.S.-ROK alliance lacks adequate means of responding to the North’s limited provocations. Instead, it might be more appropriate to strengthen South Korea’s advanced conventional forces and modernize the U.S. forces stationed in South Korea in order to bolster the credibility of the alliance’s immediate and proportional retaliation.

Third, there exists a need for a more delicate deterrence strategy to be developed. In the current circumstances, where the two sides are capable of destroying each other, the promise of unconditional and massive retaliation in response to any provocation by North Korea may render the South’s response unreliable. As a consequence, various levels of response options, ranging from small-scale retaliation to the possibility of phased retaliation and on to the threat of massive retaliation, should be prepared. This implies that the U.S.-ROK alliance would respond to North Korean provocations in a way that raises the possibility of all-out war, not the certainty of all-out war.

Finally, efforts to open a channel for dialogue with North Korea should be continued while reinforcing the alliance’s deterrent capabilities. Information exchange is critical in relation to crisis management because it allows each side to predict the other’s next move. This is particularly important when a crisis is escalated inadvertently, as in such a situation the same information can be processed differently, which can lead to errors in terms of impulsive decisions or judgments.

North Korea is rapidly expanding its nuclear capabilities, and Kim Jong-un has made it clear that the North is willing to use its newly acquired capabilities actively and preemptively. This situation places a lot of pressure on military planners in Washington and Seoul. However, military planners should try to view the situation objectively during times like these. Emotions and biases are not a great help when it comes to the formulation of sound policies. Furthermore, it is critical that military planners remind themselves of their desired political objectives. The United States and South Korea are not competing ideologically with North Korea. Rather, their political goal is to achieve and maintain stability on the Korean Peninsula in order to ensure peace and prosperity. Thus, it is time to reconsider what would be the best military strategy for use in this situation.