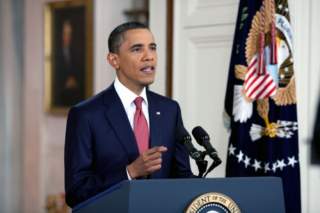 Let's just say they’re not likely to award him a spot in the pantheon of military masterminds.

In assessing the president’s legacy, historians will have plenty of legitimate topics to tussle over: his power as a politician, his practice of statesmanship, his place as a moral and social leader. Scribes can go back and forth on his merits and missteps in all of these areas. But there are no criteria for measuring presidential power that suggest he ranks as a talented commander-in-chief. Quite the contrary.

Even by the resume written by the Oval Office, the president's accomplishments in this field look pretty meager.

Barack Obama ended two wars. This claim rests on the withdrawal of U.S. troops from Iraq and the drawdown of American forces in Afghanistan. Neither action ended a war. Battle continues to rage in Iraq, and the country is in far, far worse shape militarily (and by most any other measure) than when Mr. Obama entered the Oval Office. Today, American military assistance is flowing into--not out--of Iraq.

As for Afghanistan, U.S. troops are still there, fighting and dying. CENTCOM, the Pentagon, the Afghans, Pakistan, India and our NATO allies all think the troops need to stay. There is more fighting ahead. This is not what peace looks like.

Barack Obama led from behind. Even the president regrets this characterization of his war-fighting strategy for Libya. But, whatever you call it, his strategy didn't work. Four years after the death of Muammar Qadhafi, Libya is a hell hole, stuck in a cycle of internecine violence.

Barack Obama ended the war on terrorism.  “Bin Laden is dead.”  “Al Qaeda is on the run.” “ISIS is the JV team.” Only the first claim is true—and by the time Seal Team 6 took out Osama Bin Laden, he was semi-retired. Meanwhile, al Qaeda has affiliates all over South Asia, the Middle East, and North Africa. And ISIS has its own country—comprising a third of Iraq and a third of Syria. The big picture reveals that, since the president started: more people are dying from terrorism; the terrorists control more territory and they have more money. Oh, and there are more, not less, terrorist plots aimed at the U.S.

Barack Obama fulfilled his duties as commander-in-chief. Well, even that did not go so well. Mr. Obama has been a poor steward of the armed forces. When he leaves office, the U.S. military will be smaller and less capable than it was on 9/11. The Heritage Foundation’s “Index of U.S. Military Strength” now rates the ability of U.S. armed forces to prevail in a two-war scenario as “marginal.” By every objective measure, the nation has received a meager return on the defense dollars invested by Mr. Obama’s Pentagon.

That’s not to say the president hasn’t had an activist agenda at the Pentagon. He has. At his insistence, the brass has poured lots of resources into green energy programs, gender equality experiments and so on. Historians can debate their virtue and value. It is tough to make the case, however, that they dramatically improved the combat power of the U.S. military.

Barack Obama avoided quagmires. Certainly the administration has avoided getting sucked into an intractable military morass—be it  in Syria, Libya, Somalia, Mali, Ukraine, Yemen or elsewhere.  But all of these trouble spots continue to make trouble for U.S. interests and for our allies.  Essentially, the president’s defenders are arguing, "Well, it could be a lot worse"—a less than impressive standard of achievement.

With such slim pickings on the positive side of the ledger, what’s likely to occupy most of future military historians time is sorting out exactly why Mr. Obama failed so thoroughly as master and commander. Here are several presidential preferences that may weigh heavily on their minds.

Incrementalism. Central to the Obama doctrine is the restrained use of force. The president always seeks to find the absolute minimum level of military power he can get away with. That makes his actions predictable, and when there is an imbalance of interest—when an adversary is willing to raise the level of violence higher than Mr. Obama calculated—the president comes up short.

Cognitive dissonance. The White House has penchant for believing a) everything is going according to plan, b) when things are going badly, it doesn't really matter, and c) the other guy can't be smarter than we are. Each of these preferred beliefs is a weakness. Together, they make the Oval Office terrible at reading their adversaries, unable to sense failure and committed to spinning the story to make everything seem okay, instead of changing course when everything goes wrong.

Risk aversion. Ever since Benghazi, the White House has been averse to risking success and failure in a clash of arms. It always elects for the politically safer course—one that leaves the President less accountable for military failure.  Unfortunately, excessive risk aversion actually drives up risk. Instead of mitigating threats, it placates or enables them, allowing them to grow faster and present an even bigger problem some time later. It’s like the penny-pinching car owner who forgoes paying $40 bucks for an oil change, leaving his engine to self-destruct down the road.

Historians may well debate why these pathologies dominate Mr. Obama's actions as military commander, but they are not at all likely to laud them--or their consequences.