Is Obama Abusing the Constitution to Combat ISIS? 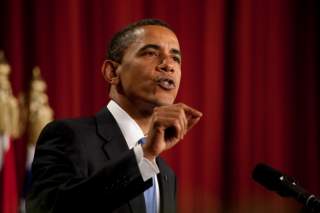 Barack Obama takes the Constitution very seriously, he’ll have you know. “I’ve studied the Constitution as a student, I’ve taught it as a teacher,” he proclaimed shortly after his inauguration, in a speech full of passive-aggressive potshots at President Bush’s “deciderist” approach to executive power. “I took an oath to preserve, protect and defend the Constitution,” Obama said, “we must never, ever, turn our back on its enduring principles for expedience sake.”

One of those enduring principles is reflected in the Constitution’s allocation of war powers: “in no part of the Constitution is more wisdom to be found, than in the clause which confides the question of war or peace to the legislature, and not to the executive department,” Madison wrote in 1793. Were it otherwise, “the trust and the temptation would be too great for any one man.”

If Obama ever respected that principle, he grew out of it as he “grew in office.” Even before the current debacle in Iraq, the president’s record on war powers was one of legal sophistry in the service of raw power—an object lesson in why you should never let constitutional-law professors near the Oval Office. But now, he appears poised to plumb new depths.

In his nationally televised address Wednesday night, the president announced that “we will degrade, and ultimately destroy” ISIS with “a systematic campaign of airstrikes,” that will likely include targets in Syria, will definitely require new boots on the ground, but will certainly not drag us “into another ground war in Iraq,” don’t worry. Our “kinetic military action” in Libya was supposed to last “days, not weeks,” but the administration is making no such promises this time—the fight against ISIS may take years.

Still, “I have the authority to address the threat,” Obama maintained, with or without new authorization from Congress. Where does the president suppose that authority lies?

It can’t be found in Article II. That article’s commander-in-chief clause, as Hamilton explained in Federalist 69, just makes the president “first General and admiral” of America’s armed forces—and generals and admirals don’t get to decide whether and with whom we go to war. And, contra John Yoo, the legal architect of Bush’s Terror Presidency, unilateral warmaking authority can’t be conjured out of the penumbras and emanations of Article II, Sec. 1’s grant of “the executive power.” Virtually no one from the Founding era seems to have understood the clause in that way. As Professor Michael Ramsey puts it:

“Every major figure from the founding era who commented on the matter said that the Constitution gave Congress the exclusive power to commit the nation to hostilities. Notably, this included not only people with reservations about presidential power, such as James Madison and Thomas Jefferson, but also strong advocates of the President’s prerogatives, such as George Washington and Alexander Hamilton.”

Or as candidate Obama put it, back when “Hope” bloomed and the world was young:

“The President does not have power under the Constitution to unilaterally authorize a military attack in a situation that does not involve stopping an actual or imminent threat to the nation.”

That’s not the situation we’re in, by the president’s own admission: “we have not yet detected specific plotting against our homeland,” he said Wednesday, but “if left unchecked, these terrorists could pose a growing threat beyond that region—including to the United States.”

President Obama’s case for preventive war with ISIS, ironically enough, takes a page from President Bush’s 2002 National Security Strategy: “America will act against such emerging threats before they are fully formed.” (NB: If the threat’s not “fully formed,” that means you have time to go to Congress for a vote.)

As it happens, John Yoo recently told Buzzfeed that “Obama has adopted the same view of war powers as the Bush administration.” But you’re not going to hear this president cop to that charge—hence this week’s desperate search for legal cover outside of Article II, under authorizations for the use of military force (AUMFs) from prior Congresses.

On Tuesday, the Washington Post reported that “the White House’s belief that it has authority to act is based on the reports Obama has filed with Congress under the War Powers Act and the earlier congressional authorization for the war in Iraq.” But by Wednesday, on the eve of the president’s nationally televised address, a “senior administration official” averred that the real source of the president’s authority is the post–9/11 AUMF, adopted three days after the terror attacks in 2001, and now going on its lucky 13th year.

Any port in a storm, it seems: the rationales—and the administration’s preferred AUMFs—are shifting rapidly here. But let’s take each of those arguments in turn.

The formal opinion Obama’s Office of Legal Counsel released in 2011 on the president’s “Authority to Use Military Force in Libya” argues that “Congress itself has implicitly recognized this presidential authority” for committing U.S. forces to hostilities abroad in the 1973 War Powers Resolution. Obama isn’t the first president to argue that the WPR gives the president a 60- to 90-day “free pass” for warmaking without congressional authorization. But it’s an argument that won’t survive a good-faith reading of the WPR’s text.

But good-faith readings of statutory text have never been this administration’s strong suit. In order to continue bombing Libya past the WPR’s 60-day limit, it famously advanced the argument that dropping bombs didn’t constitute “‘hostilities’ envisioned by the War Powers Resolution.”

And now, apparently, they’re torturing the text of the 2002 Iraq War Resolution in the hopes it will yield legal authority for a new war against a different enemy, more than a decade later.

Obama’s predecessor tried a similar trick in the run-up to the Iraq War. Before seeking new authorization to attack Iraq, Bush administration officials floated the argument that the congressional resolution that authorized Gulf War I in 1992 still had enough life left in it to support Gulf War II. Then, as now, that argument was too cute by half.

The 2002 resolution that the Obama Team invokes for a 2014 war is helpfully titled, “Authorization for Use of Military Force Against Iraq Resolution of 2002,” and its operative clause reads, “the President is authorized to use the Armed Forces of the United States as he determines to be necessary and appropriate in order to… defend the national security of the United States against the continuing threat posed by Iraq.”

But what the president described Wednesday night isn’t a war “against Iraq” or “the continuing threat posed by Iraq.” Iraq’s ramshackle, Shiite-led government is part of our “Coalition of the Willing” here. Along with the bombing, we’ll “support Iraqi … forces with training, intelligence and equipment,” Obama said, and “support Iraq’s efforts to stand up National Guard Units.” (When they stand up, we will stand down.)

As Brookings’ Wells Bennett points out, the language and structure of the 2002 AUMF point to “a narrower congressional intent” aimed at addressing “government action” by the Saddam Hussein regime. It doesn’t read like a delegation in perpetuity to wage war against any potential threat emerging from the geographical region, loosely defined.

Perhaps that’s why the administration now appears to be relying on the more broadly worded AUMF Congress passed three days after the terror attacks on September 11, 2001. That resolution empowers the president to use “all necessary and appropriate force against those nations, organizations, or persons [who] planned, authorized, committed, or aided” the 9/11 attacks and those who “harbored” the perpetrators.

It’s an impressively stretchable sentence that, in the administration’s view, can be used to justify everything from “boots on the ground in the Congo” to drones over Timbuktu. But there’s broad consensus among national-security law scholars that it won’t stretch far enough to provide legal cover for war against a group that’s been publicly repudiated by Al Qaeda.

The “senior administration official” quoted Wednesday begs to differ. He argues that ISIS’ “longstanding relationship with al-Qa’ida (AQ)… its long history of conducting, and continued desire to conduct, attacks against U.S. persons and interests, … and ISIL’s position—supported by some individual members and factions of AQ-aligned groups—that it is the true inheritor of Usama bin Laden’s legacy” all mean that the president needs no further authorization to wage war on ISIS—they’re covered by the 2001 AUMF.

Which part, exactly? Did ISIS plan or aid the 9/11 attacks, or are they “harbor[ing]” a group that excommunicated them? Does this “true inheritor” theory suggest that the AUMF no longer authorizes war with AQ, since they’re no longer the legitimate heirs to their own legacy? And what does any of this have to do with the actual language of the resolution?