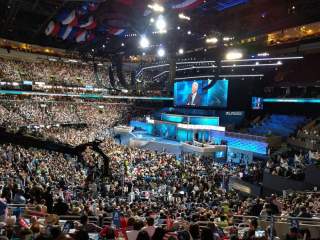 President Obama’s eloquent, moving, nicely delivered speech at the Democratic National Convention last night conveyed to the nation a central reality of the 2016 president election—namely, that it is fundamentally a contest between Obama and Republican candidate Donald Trump, with Hillary Clinton caught in the middle.

This can be seen on a number of levels. Television commentators quickly noted the obvious reality that a Trump victory would bring about a concerted assault on the Obama legacy. The Affordable Care Act would be dismantled and replaced. Executive orders and regulatory-agency actions designed to interpose the federal government into expanded areas of endeavor would be reversed. The president’s free-trade sensibilities would be supplanted by a more aggressive trade policy. His inclination to play the role of moral arbiter on racial matters would find no corollary in a Trump presidency.

Thus, it wasn’t surprising that Obama would devote a significant portion of his speech to touting his record and defending his legacy. His litany of accomplishment included moving the country beyond the deep recession he inherited, creation of millions of new jobs (there’s some dispute about what’s the appropriate number), the health law, the Osama bin Laden killing, the nuclear deal with Iran, normalization of relations with Cuba, a climate agreement and legislation to protect consumers from fraud. He even took credit for "marriage equality," something he opposed until well into his presidency and for which he can take little legitimate credit.

The aim, clearly, was to fortify Democrats against Republicans bent on turning the election into a referendum on the Obama record at a time when polls indicate that around 70 percent of Americans believe the country is on the wrong track.

On another level, Obama felt a need to cast a glow of confidence and assurance over his audience and project it through the television screens of America. "While this nation has been tested by war and recession and all manner of challenge," he declared, "I stand before you again tonight, after almost two terms as your President, to tell you I am even more optimistic about the future of America than ever before." This reflected his need to blunt Trump’s portrayal of a country in decline, beset by problems of Democratic provenance and requiring immediate and extensive remediation crafted by Republicans. "America is already great," said the president. "America is already strong. And I promise you, our strength, our greatness does not depend on Donald Trump."

Though he took some further well-aimed jabs at the Republican challenger, he avoided the level of harshness employed by other convention speakers. He pointedly said that American values were too strong to be threatened by "fascists or communists or jihadists or homegrown demagogues." He said the New Yorker is "betting that if he can scare enough people he just might score enough votes to win this election." (It’s a bad bet, he assured his audience.) He questioned Trump’s veracity on facts. When the audience booed at the mention of Trump’s name, the president said, "Don’t boo; vote."

But it was in the president’s grandest passages that he laid out the fundamental, underlying fault line between his views and those of the GOP challenger. It came when he discussed, as he had in his first Democratic convention speech in 2004, the legacy of his Kansas grandparents and their prairie relatives going back generations. They were mostly Scotch-Irish, some Democrats but most Republicans; hearty folk, self-reliant, hard-working, persistent in their tasks and patient in their expectation of rewards. Their values were shaped by "true things, things that last, things we try to teach our kids." And these values taught him by his grandparents, he said, "haven’t gone anywhere. They’re as strong as ever; still cherished by people of every party, every race, every faith. They live on in each of us."

Those Kansans of his heritage, added the president, knew that these values were what drew immigrants to America. He spoke of the "bonds of affection" nurtured by those American values, which constituted "our common creed."

This passage laid down a significant political marker. He was saying implicitly that Trump has been provocatively and unnecessarily whipping up fears among his constituents that their fundamental values are threatened by immigration. But those values remain intact, he argued, and are strong enough to shape and mold immigrant sensibilities to the American value system.

Trump takes a different view. He sees those fundamental American values as far more fragile, and hence threatened, than does the president. Thus, mass immigration that gives little regard to determining who precisely is coming in can indeed be threatening. So can policies fostering a greater immigration flow over a particular time frame than can be easily assimilated into American society.

Beyond that, Obama’s touching description of his Kansas forebears raises a question of just what values he’s talking about and whence they come. The late Harvard political scientist Samuel P. Huntington has written that the American identity has come down to matters of culture and the American Creed. Obama seemed to mesh them together, but they actually are separate civic propositions. The American Creed essentially encompasses the nation’s political principles—liberty, equality, democracy, individualism, human rights, the rule of law, private property. These principles no doubt were embraced with solemn fealty by Obama’s Kansas forebears.

But he was talking also about the cultural values that for centuries constituted a significant element of the American identity. As Huntington points out, these values emanated largely from what he calls the country’s "mainstream Anglo-Protestant culture." Elements of this cultural identity included the English language, Christianity, religious commitment, individualism and the so-called Protestant work ethic. This culture, writes Huntington, "has been central to American identity for three centuries. It is what Americans have in common and, as countless foreigners have observed, what has distinguished them from other peoples." He adds: "In the late twentieth century, however, the salience and substance of this culture were challenged by a new wave of immigrants from Latin America and Asia, the popularity in intellectual and political circles of the doctrines of multiculturalism and diversity, the spread of Spanish as the second American language..., the assertion of group identities based on race, ethnicity, and gender…, and the growing commitment of elites to cosmopolitan and transnational identities."

It is interesting to note that the Democrats’ vice presidential candidate, Virginia’s Senator Tim Kaine, ostentatiously slipped into speaking Spanish intermittently during his acceptance speech, thus inserting into the proceedings, perhaps unwittingly, a central element of the controversy surrounding the country’s cultural identity—that is, its language. Huntington argued that this controversy, among many others, reflects the reality that the country’s traditional cultural values are indeed under attack, and as they fade the only remaining national adhesive left will be the American Creed. He has questioned whether that is sufficient to sustain national cohesion long into the future.

Obama seems to be saying that it can. Trump and Huntington doubt it. Therein lies the fundamental fault line of this campaign. There remain many other points of contention between the nation’s elites and ordinary citizens who feel marginalized by the elites. But this one gets closer to the heart of the matter than any other. Obama was right when he said this election ultimately was about "who we are as a people."

On Wednesday night, the president gave what was probably the richest and most sensitive expression of his point of view yet heard during the campaign. He didn’t fall back on any "guns and religion" digs against those concerned about the erosion of the American cultural identity, as he has in the past (and as Nancy Pelosi did yesterday), and he adopted a tone of pained instruction over one of condemnation.

Trump, the political bruiser to Obama’s deft fencing champion, will be hard pressed to make his case with the rhetorical sophistication and intellectual refinement seen at the convention podium Wednesday night. But so far Trump hasn’t needed such traits in his quest to rally working-class Americans to his angry banner. The two men’s political styles are as far removed from each other as their views on this fundamental question of American identity.