Obama, Please Leave "All Options on the Table" When Fighting Ebola 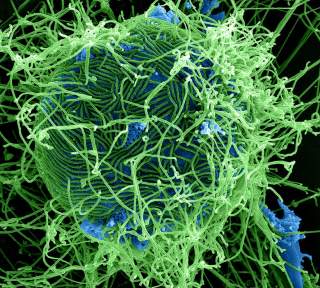 Speaking at the Centers for Disease Control and Prevention in Atlanta on September 16, President Obama assured the American people that:

“our experts, here at the CDC and across our government, agree that the chances of an Ebola outbreak here in the United States are extremely low. We’ve been taking the necessary precautions, including working with countries in West Africa to increase screening at airports so that someone with the virus doesn’t get on a plane for the United States. In the unlikely event that someone with Ebola does reach our shores, we’ve taken new measures so that we’re prepared here at home.” [emphasis added]

Given the alacrity with which the Ebola crisis has unfolded, the above seems like an address from an altogether different era. As usual, the president and his speechwriters get no points for prescience. Only three days later on September 19, Thomas Duncan boarded a flight from Monrovia to Dallas. On September 30, the CDC confirmed that Duncan had contracted the disease prior to flying to Dallas. He died eight days later but not before passing the disease on to two of his nurses, one of whom, Amber Vinson, boarded a commercial flight from Dallas to Cleveland on October 10. She returned to Dallas three days later and is now being treated at Emory University in Atlanta. What makes the story even worse (as if that were possible) is that Ms. Vinson asked for, and received, a go-ahead for her trip from the CDC, though the CDC had initially denied that it had done so.

All the while, roughly 150 people from Liberia, Sierra Leone and Guinea continue to travel to the United States on a daily basis. According to the World Health Organization, there have now been over 9,000 people have been diagnosed with Ebola, of which only 4,500 have survived.

As if to allay concerns over the less than robust response by his administration, President Obama took what for him passes for resolute action and cancelled a fundraising trip to Connecticut and New Jersey ostensibly in order to monitor the situation from the White House. And for its part, while facing a difficult situation, the CDC is not exactly covering itself in glory. Consider this exchange between CNN’s Rene Marsh and the lamentably ubiquitous Wolf Blitzer on the CDC’s efforts to contact Ms. Vinson’s fellow passengers:

RENE MARSH, CNN CORRESPONDENT: …they are reaching out to those passengers -- we're talking about 132 people who were on board this flight -- to answer any questions and follow-up with them. They even put out this 1-800 phone number for people who were on board this flight. If they have any concerns, they could call the CDC. We dialed that number today and at last check, the wait time to get through, 390 minutes.

BLITZER: Three hundred and ninety minutes? There's obviously a problem that they have there.

Nothing, you see, gets by Wolf.

Opinions differ over whether a severe outbreak of the African virus will or will not hit the States. Writing in the London Review of Books this week, Harvard epidemiologist Dr. Paul Farmer wrote that “there’s little doubt that the epidemic will be contained in the U.S., which has the staff, stuff and systems” to prevent a large-scale contagion. Yet Laurie Garrett, a senior fellow for global health at the Council on Foreign Relations, seems to disagree. In a recent Washington Post editorial, she outlined five popular “myths” regarding Ebola, the first being: “Ebola won’t spread in rich countries.” According to Garrett, “no system of prevention is 100 percent,” warning further that “hubris is the greatest danger in wealthy countries—a sort of smug assumption that advanced technologies and emergency preparedness plans guarantee that Ebola and other germs will not spread.” So much for having the “staff, stuff and systems.”

But where Farmer, Garrett and organs of establishment opinion like the Washington Post editorial board agree is with regard to the utter futility of enacting a travel ban from West Africa. Garrett’s fourth “myth” is: “travel bans would keep Ebola from spreading in the United States,” telling readers that “the days of Ellis and Angel islands screening out diseases effectively disappeared with the jet age.” For its part, the Washington Post claims that a travel ban to and from the stricken West African nations would be an “extreme measure” and it worries about the effect a ban would have on the West African economy. Yet the Post seems untroubled as to whether a severe outbreak of Ebola here would have a deleterious effect on the American economy. Dr. Farmer, while agreeing that “attempts to seal national borders won’t stop” Ebola, also worries that “the closure of national borders means, among other things, that it’s more difficult for the staff and the stuff to reach those most in need.” And anyway, as Farmer told CNN not long ago, it’s going to spread to Western nations regardless; after all, “we live in a global economy.”

What these seemingly disparate responses show is just how deeply ingrained the ideology of globalization has become among Western elites. Yet missing from the discussion is any recognition of the fact that globalization is not some insurmountable force of nature; it is a choice, ardently pursued by successive administrations through a series of policies starting with the signing of NAFTA in the early 1990s. Less, please.

As for the legitimate concern that a travel ban would unduly inhibit relief efforts, the American Conservative’s Scott McConnell has recently pointed out that “the concern for the medical workers’ travel and access is a valid one. But as the United States is flying thousands of troops to West Africa to help contain the epidemic, it would surely be possible for aid workers to fly back and forth on military planes.”

Tellingly, the president, who seems to believe that while the appearance of Ebola on these shores warrants the cancellation of a fundraiser or two, will take no measures that may prove to be an obstacle to the pursuit of global trade and investment. In fact, so far, the president has explicitly ruled a West African travel ban out. This is an odd position for a politician such as Obama to take, given that he has repeatedly said that the United States must “leave all options on the table” when it comes to dealing with the likes of Iran and Syria.

It is all too true that we cannot say with complete certainty whether or not banning flights to and from West Africa will make much of a difference in stemming the flow of cases en route to the United States. But what we most assuredly do know is that air travel has indeed facilitated the spread of the virus—after all how did the two infected Spanish missionaries make their way to Madrid before infecting a nurse there? How did Thomas Duncan make his way to Dallas? It seems that a better policy might be for the president to truly keep all of his (and by extension, all of our) options on the table with regard to the burgeoning Ebola crisis.