Obama in Vietnam: Long on Weapons, Short on Human Rights 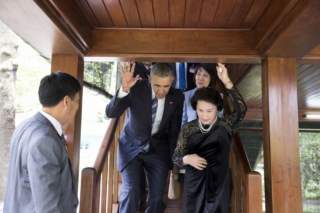 United States President Barack Obama waved goodbye to Vietnam today, following meetings in Hanoi and Ho Chi Minh City with Vietnam’s new leadership, young entrepreneurs, and civil rights activists. Despite waiting until now to visit Vietnam for the first time, he leaves behind an enduring legacy of goodwill, as thousands of Vietnamese flocked to line the streets throughout his three-day visit in hope of catching a glimpse of the widely-popular U.S. president.

On Monday, Obama also hoped to leave behind any of the remnants of animosity between the two former enemies of the Vietnam War—by announcing a complete lifting of an embargo on lethal weapons sales to Vietnam. The Vietnamese have been clamoring for advanced weaponry from the United States since the normalization of relations in 1995, and Washington partially eased the embargo toward the end of 2014 to allow for the sale of some defensive maritime equipment to Vietnam.

Last year, Vietnam was the eighth-largest purchaser of arms in the world and over the last five years arms imports are up 699 percent. Hanoi currently buys a significant amount of military equipment from Russia, including Kilo-class submarines and corvettes, although they seek to buy more advanced equipment from other nations, such as the United States, in keeping with a diversified “no military alliance” foreign policy. U.S. defense contractors are salivating over sales, most likely the P-3 surveillance planes, helicopters and missiles Hanoi needs to beef up its naval forces and coastal defenses.

The full lifting of the embargo fits neatly into Obama's strategic "pivot" toward the Asia-Pacific region, and may help to boost Hanoi’s defenses against an encroaching China. Yet given Vietnam’s past record on human rights and recent domestic turmoil, at a joint press conference held on Monday, Obama felt it necessary to include a proviso, “As with all our defense partners, sales will need to still meet strict requirements, including those related to human rights.”

Thousands of protesters have gathered in Hanoi and Ho Chi Minh City on three successive Sundays this month to vent their anger at the government over their response to the death of one hundred tons of fish in the central provinces in April. The protesters widely believe a $10.6 billion coastal steel plant in Ha Tinh province, owned by a unit of Taiwan's Formosa Plastics, is to blame for discharging untreated waste into the ocean.

The first protest on May 1, International Workers Day, was allowed to attract hundreds of demonstrators, although under heavy surveillance by police forces, regular army, paramilitaries, rural militia forces and "neighborhood guardians." On the second Sunday, security officials cracked down on demonstrators using tear gas to disperse the protesters and reportedly beating around three hundred people. Others were reportedly arrested and later freed after questioning.

The third Sunday protest this month saw Vietnamese authorities taking a more proactive, authoritarian line toward the protesters, issuing an eleven-minute warning on several state-run television channels to shun calls by "reactionary forces" to join protests, and questioning their motives. Vietnam Television (VTV) also disclosed names and images of well-known dissidents and bloggers, and accused overseas groups such as the Viet Tan (Vietnam Reform) of funding the protesters, saying, "Their intention to abuse and disturb was revealed when many subjects called for using knives and petrol bombs to attack the functional forces and to overthrow the authorities."

Following the warning by VTV, security measures were tightened in Hanoi and Ho Chi Minh City, allowing nothing more than small groups to assemble and demonstrate. In Ho Chi Minh City, some protesters were hoarded onto buses and driven far from the protest areas. Access to information on Facebook was also curtailed, after organizers used the social-media platform in a call to rally at certain venues around Ho Chi Minh City.

International human-rights organizations such as Human Rights Watch and the United Nations Human Rights Office for South-East Asia (OHCHR) have all expressed concern over the government's recent heavy-handedness toward political opponents and recent restrictions on freedom of expression and freedom of association and assembly. Those rights are embedded in article 25 of Vietnam’s 2013 Constitution: “The citizen shall enjoy the right to freedom of opinion and speech, freedom of the press, to access to information, to assemble, form associations and hold demonstrations.”

While there is no question some of the demonstrators would like to see the government removed from office, many others are seeking accountability for the environmental disaster and looking for responsible action taken in future to prevent similar disasters. A preliminary investigation found no links to Formosa's steel plant, and blame was deflected toward a possible "red tide" (when algae blooms and produces toxins), yet the Vietnamese citizenry are not buying into those answers. Newly elected prime minister Nguyen Xuan Phuc has promised a thorough investigation including outside experts from the United States, Germany and Israel, vowing "We will not shield anyone found causing the pollution."

While Obama may be loved by many Vietnamese, his lifting of the arms embargo—without imposing any apparent conditions precedent on improving human rights—only served to dishearten those citizen activists clamoring for freedom of speech, freedom of assembly and accountability for Vietnam’s largest environmental disaster. Obama did mention in his remarks, “there continue to be areas where our two governments disagree, including on democracy and human rights” and he did meet with several activists, although several were turned away or placed under house arrest at the last minute. On his first visit to Vietnam, many Vietnamese hoped Obama could bring meaningful change on human rights, but on the last legs of his farewell tour, it seemed there was little Obama could do but express his regrets over the missing activists.

Gary Sands is a Senior Analyst at Wikistrat, a crowdsourced consultancy, and a Director at Highway West Capital Advisors, a venture capital, project finance and political risk advisory. He has contributed a number of op-eds for the South China Morning Post, U.S. News and World Report, Newsweek,Washington Times, the Diplomat, International Policy Digest, Eurasia Review,Indo-Pacific Review and China Digital Times.