Obama to Visit the New Owner of the 21st Century, India 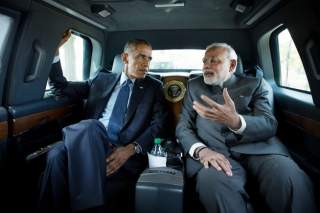 President and Mrs. Obama are now on their way to what may be the world’s most important city at mid-century.

Are they going to Beijing? No, they will be traveling to New Delhi.

The trip is historic. For the first time, an American leader will attend Republic Day celebrations in the Indian capital, and Obama will be the first U.S. president to visit India twice while in office. Moreover, this is the first time, in recent memory, that a White House occupant has taken a long-distance flight to just one destination.

The trip has just about everything. The president and Prime Minister Narendra Modi will conduct wide-ranging discussions on, among other topics, climate change, education, nuclear power, Pakistan, Afghanistan, and Iran. There will also be pomp aplenty. India’s January 26 events, commemorating the adoption of the Indian constitution, are among the world’s most colorful. Expect business-deal making with CEOs in attendance. Speeches? Obama will lay out his “vision” for relations with India. There will even be time for sightseeing: the Obamas will tour the Taj Mahal.

Apart from the national pride of hosting the leader of the world’s most powerful state on the 66th Republic Day—chests will swell and hearts beat hard across the subcontinent on Monday—there is, in India, concern about China.

For Indians, China is not an across-the-ocean location, like it is for Americans, but an on-the-border threat. Xi Jinping visited India in September in what was also a symbolism-rich trip, but that event was marred by Chinese troops advancing deep into disputed, but Indian-controlled, territory in Ladakh, high in the Himalayas. Perhaps worse from New Delhi’s point of view, it appears that Xi did not order the incursion, suggesting the Chinese military was acting on its own. Obviously, no one in New Delhi policy circles is comfortable with an out-of-control nuclear-armed military force intent on creating incidents.

That means Obama is a card in the hands of Modi, who has moved fast to assert Indian interests since becoming prime minister in May. He has reached out to neighbors but also to far-away countries in the shadow of Beijing’s increasingly expansive territorial ambitions, most notably beleaguered Vietnam and Japan.

And in this context it is natural that Modi should be looking to Obama, whom he visited in Washington in September. “Having the U.S. president at the Republic Day celebration is a good thing, he is blessing Modi,” Mohan Guruswamy of the Centre for Policy Alternatives told Reuters this month. “And that is a lesson to the Chinese that you have to mend your fences with us.”

In the short-term, then, Modi’s invitation to Obama is about countering China. Washington, of course, shares Indian concerns. Beijing has disappointed American policymakers and analysts in recent years, and the outreach to India is seen as a hedge against increasingly belligerent and unpredictable Chinese behavior.

Yet America’s interest in India should be broader than balancing Beijing. As an initial matter, the world’s most populous democracy and its most powerful one have much in common. But even for those in Washington who disdain values-based diplomacy, a full embrace of India makes sense.

Why? India, not China, should dominate Asia in the decades ahead. At the moment, China has just about reached the limits of what is possible within its current system. Its economy, for instance, is slowing fast, not because its leaders are trying to implement reform as they proclaim—they talk reform yet endorse regressive policies—but because their investment-led, export-heavy growth model is exhausted. Worse, the country is on the edge of a property meltdown and debt crisis.

In India, on the other hand, the economy is looking up. Bloomberg Businessweek talks about “a world-turned-upside-down moment,” coming as early as next year, “when India, always the laggard, may pull ahead of China and become the fastest-growing of Asia’s giants.”

It’s no secret how prospects got reversed. The Indian leader came to power on a platform of growth-friendly, pro-business policies sometimes reduced to the phrase “Modinomics.” Modi, therefore, has the potential to change growth patterns for the foreseeable future, with the country entering a period of fast expansion powered by, among other things, surging investment, both domestic and foreign.

While growth patterns are changing in India’s favor, so is something more permanent. In China, adverse demographic trends have been accelerating in recent years. The country’s population will not peak during the 2030-2035 timeframe, as the most recent U.N. statistics indicate; in 2026, as predicted by the U.S. Census Bureau a half decade ago; or in 2025, as leading demographer Li Jianxin estimated. Senior official Liu Mingkang, speaking at the Asia Global Dialogue in May 2012, admitted China’s population would top off in 2020.

The rapid bringing forward of the estimated peak is largely a consequence of China’s total fertility rate—essentially the number of children born to each female who has attained childbearing age—falling to a “dangerously low” of 1.4, well below the 2.1 needed for replacement.

The Chinese, who take great pride in their country ranking as the world’s most populous, will soon be relegated to second place, behind India, which will take the crown in no more than 10 years, probably fewer.

India’s population will peak, according to the U.N., at 1.645 billion in the 2065-2070 timeframe. In that period, China is projected to have 368 million fewer people, and, in all probability, the gap will be even larger as these numbers do not reflect the accelerated Chinese decline evident today. In the middle of the century, India could have as many people as China and the U.S. combined.

Where it counts—workers—China will also be a distant second. India’s workforce will overtake China’s by 2030 if not before. By mid-century, there will be about one billion Indians of working age. That’s at least 130 million more than the Chinese in the same group, perhaps 200 million more.

In mid-century, the median age of India will be a young 37 versus China’s 46. Then, the percentage of people 65 and over will be 23.9 percent in China and only 12.7 percent in India.

“India has close to ideal demographics,” said Credit Suisse’s Robert Prior-Wandesforde to CNBC. “It’s in a sweet spot.” China, on the other hand, has one of the world’s most unenviable population profiles at this time, and its government, by insisting on maintaining its coercive one-child policy, appears relentlessly determined to make its situation even less tenable.

Demography may not be destiny, but it certainly limits what is possible. China looks to be the more powerful nation now, but population trends suggest the Chinese will have to leave center stage soon in favor of their rivals in the subcontinent.