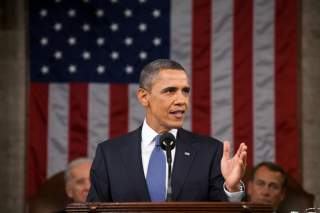 The president is trying to lure conservatives into a mousetrap with an offer of a topline increase in defense spending in return for removing the spending caps put in place by the 2011 Budget Control Act (BCA). If they are truly interested in the long-term fiscal health of the country, they shouldn’t go for the cheese.

The defense portion of the White House budget submission contains about a $38 billion increase in 2016, and about $155 billion over the next five years. The additional money will raise the base budget to its highest level ever, adding weapons and and support for military operations across the world. This is surely great news for the defense hawks on the House and Senate Armed Services Committees who have been advocating for additional resources ever since the BCA began impacting the defense budget. However, the defense budget hike is a blatant attempt to entice conservatives into abandoning the 2011 cost caps and allowing increases across the board, from defense to entitlements, with accompanying growth in deficits.

Budget deficits have been coming down steadily over the past five years due to some sluggish growth in the economy and the automatic increases in revenues following the expiration of the Bush era tax cuts in January of 2013. However, a recent Congressional Budget Office (CBO) study projects that deficits will soar again beginning in 2019 due to costs associated Baby Boomer’s retirements and the mounting challenge of paying interest on the nation’s $18 trillion debt. Without action now, the debt as a percentage of the GDP will approach 80 percent by 2023, a level not seen since the 1950s when the nation was paying off the costs of World War II. Now is not the time to turn the spigot back on and profligately spend on defense, and not just because of the debt.

History shows that problems, be they personal or geo-strategic, cannot be solved by throwing money at them. Money cannot buy love or security. The nation has gotten by for far too long depending upon a sizeable legacy force that largely represents an evolution of the force that fought and won World War II, establishing the United States as a superpower. The nation’s present military, composed of aircraft carriers, tanks, and fighter aircraft, defeated our nation’s enemies in the past and protected us through the long Cold War that followed. In light of this success, the question becomes, “if it aint broke, why fix it?”

First of all, the current force has never really been tested. To be sure, the nation has fought in Korea, Vietnam, Iraq and Afghanistan, but with no clear victories. Often times the force had to be modified on the fly to compensate for the unique environments it found itself in, such as the effort to build the MRAP for Iraq. Nonetheless, the fact is that the force was never tested in direct combat against the enemy it was built to defeat, the former Soviet Union. However, numerous wargames and simulations have suggested serious gaps in the nation’s defenses; gaps that have been identified by challengers who developed plans and technologies to exploit them. Layers of investments in the traditional legacy force cannot alter the fact that the United States, like so many preponderant powers of the past, is standing still while other nations plot its defeat.

Additionally, history suggests that austerity breeds innovation while profligacy sows decline. The combination of steam, steel and electricity in the 1890s grew out of the austerity of the late 1870s. Eisenhower’s constriction of the defense budget in the 1950s resulted in the mixture of atomic reactors, nuclear weapons, and missiles that resulted in the ballistic missile submarine. The drawdown following Vietnam and “hollowing out” of the force during the Carter administration gave rise to the precision weapons, stealth technologies and advanced communications that dominated the battlefield in Iraq. When there is money to throw around, as there has been for the past 14 years, there is little incentive to innovate. Problems have been wallpapered over with greenbacks, leaving a smooth, but paper-thin surface.

If the nation is to sustain its position of leadership in the world, lawmakers should reject the president’s defense budget. As night follows day, increased defense spending will be accompanied by growth in government spending elsewhere, further eroding the fiscal foundation of the nation, threatening its international credit, and continuing to pass massive amounts of debt to future generations. Admittedly the sequester portion of the BCA should be set aside, it is strategically idiotic, but not the spending caps themselves. Give the services the ability to spend the money they receive more wisely, as opposed to indiscriminate cuts across the board, and drive innovation into the process by holding the service chiefs accountable. Service chiefs must not be allowed to respond to budget cut requests by offering up major weapons that the nation obviously cannot do without in the expectation that Congress will add back funds to keep them. National security today and into the future requires leadership, not gamesmanship.

The nation needs to stop standing still with our current legacy force and begin investing in offsetting, leap ahead technologies like cyber, unmanned combat aerial vehicles, directed energy, electro-magnetics and hypersonics. The efficient and effective defense of the nation requires the legislative branch to exercise its Constitutional powers of oversight at all levels of the budgetary process. Following electoral success, conservative leaders need to stand firm, continue to cut costs and invest in the future. Stay away from the trap. Don’t go for the cheese.