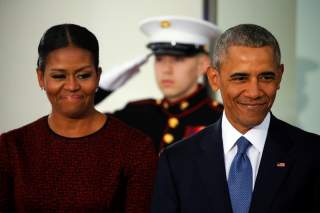 The immigration fracas continued apace Wednesday. But there have been no real signs of a deal to keep the government open, or that much headway has been made on the issue. A State Department official told me on Wednesday morning: “The U.S. government’s national-security visitor screening and vetting procedures are constantly reviewed and refined to improve security and more effectively identify individuals who might pose a threat. . . . At this time there has been no change to the Diversity Visa program or to family-based immigrant visa processing.”

For many, President Trump was elected to slash immigration levels—both illegal and legal. Although there is compelling evidence of a broader crackdown at the border, no large-scale structural changes have yet been enacted, save the ferociously contested travel ban, which was upheld by the Supreme Court. Part of the holdup are fissures on the Right—Sen. Lindsey Graham, newly the president’s friend, is vastly different on this issue than Sens. Tom Cotton and David Perdue, both of whom have served White House pointmen on the some of the administration’s more hardline, proposed measures—such as the RAISE Act.

Until conservative governing consensus is forged, a foil is needed. Bashing Obama administration foreign policy is something nearly all elected Republicans can agree on, even foreign-policy restrainers like Sen. Rand Paul and Rep. John Duncan. And paleoconservative critics at The American Conservative magazine, fans of some of Obama’s military pullbacks compared to the Bush administration, objected to a wasteful, destructive intervention in Libya, among other moves.

And Duncan and Paul opposed detente with Iran, at least as manifested by the 2015 nuclear deal. Duncan said of the Obama-instigated deal in 2015: “I believe that if this agreement had been made by a Republican President, almost all Republicans would have supported it and almost all Democrats would have opposed it. Unfortunately, questions about war and peace have become far too partisan in this country.” Duncan then voted against the deal.

Obama’s foreign policy is again a focus this week: Global Politico’s podcast with former Obama alumni Ben Rhodes and Samantha Power made some waves and the president faces a series of decisions on the Iran deal in the coming weeks.

What the Right doesn’t agree, of course, on is what to replace his foreign policy with.

Andrew J. Bacevich, a prominent conservative foreign-policy writer, takes umbrage with many of the administration’s early moves, and throws shade at some of its efforts at reform, including an audit at the Pentagon. “The audit is a gesture, unlikely to have any serious impact on how the Pentagon spends its money and how much it gets to spend,” he tells me. “What we need more than an audit on Pentagon accounts is an audit of U.S. policy.”

On policy, the Pentagon’s leader, Jim Mattis, was an Iran hawk as a general and private citizen (associated with conservative mainstay, the Heritage Foundation).

But in power, in 2018, is where these issues get trickier.

The secretary of defense “has so far declined to take a confrontational approach to limiting or rolling back the influence of Tehran and its proxies,” notes a recent report from Politico.

Though Mattis is wary of the Iran deal, he, like Senate Foreign Relations Chair Bob Corker, is even more wary of pulling out, saying as much publicly; behind the scenes, this largely links him with Secretary of State Rex Tillerson, who feels the same.

Congressman Duncan echoes that concern, telling me Wednesday: “Gen. Joseph Dunford, Chairman of the Joint Chiefs of Staff, testified before the Senate Armed Services Committee recently that Iran is complying with the landmark nuclear deal and the agreement has achieved its goal of curbing Tehran’s programs. I just do not believe we should pull out of this agreement when almost everyone who has looked at this in detail says Iran is doing what it is supposed to be doing.”

It should be noted that some on the Right have long accused Corker of never really opposing the deal—though he voted against it, he helped it advance procedurally. Among those who subscribe to that criticism is the president of the United States. "Bob Corker gave us the Iran Deal, & that's about it,” Trump tweeted in October.

Others have actually compared and noted some continuity, so far, between the administrations.

But Rhodes and Power chafe at that. “I think that there’s something very, very different about President Obama investing in alliances, building a hyper-charged different kind of relationship with China and with India, and then drawing on that political capital to get them to do more in the international system, than holding our allies in contempt, ripping up international treaties, showing our word means nothing, and then demanding that people do what we say. So, I don’t see a lot of continuity,” Power said.

“We’re all for the liberal international order,” noted Rhodes. Some who’ve consulted significantly with the president, including the now-excommunicated former White House Chief Strategist Steve Bannon, have told me they view the order as essentially a relic, and effectively over, in reality. But as neocons ascend within the Trump administration, the opposite perspective could be gaining ground.