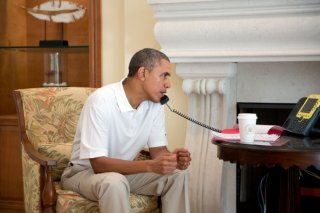 President Obama has begun a four-nation Asia trip—which may prove to be one of the more consequential Presidential trips of recent years. The Asia-Pacific has long been the most economically dynamic region on the planet; it encompasses the world’s three largest economies and half of global GDP. It is also—and this is crucial—the arena where the strategic rivalry between the American superpower and the rising Chinese challenger will play out. That dynamic is already well underway in two critical maritime arenas: the East China Sea (Northeast Asia) and the South China Sea (Southeast Asia). At its core, the President’s trip is about shoring up America’s strategic position in the region where the future is uncertain and in the balance. It is all about reassuring Asian governments (three allies, one friend) that the United States will remain a capable and absolutely reliable defense presence in the region—i.e., the region’s primary military power and its security guarantor.

This is no small thing, and it will not be anything close to easy. China is deeply determined to alter the strategic status quo to its own advantage—including bringing both the East and South China Seas under its effective control. In the East China Sea this ambition has crystallized in an assertion that the Senkaku (or Diaoyu) islands in the midst of the sea belong to China, not Japan. A unilaterally declared Chinese Air Defense Identification Zone (ADIZ) encompasses most of the East China Sea including the islands. Beijing has punctuated its claim with increasingly assertive air and sea penetrations of Japan’s claimed waters and airspace. In the South China Sea, a rapid buildup of naval and maritime police capabilities has enabled China to patrol the entire extent of the South China Sea and to expand its actual territorial holdings—as it did by recently wresting a group of rocks and reefs (Scarborough Shoals) from the Philippines.

Each of the President’s hosts on this trip is dealing with China’s hegemonic ambitions in somewhat different circumstances. For Prime Minister Abe of Japan, the task is straightforward but not easy—strengthen Japan’s capacity to defy growing Chinese military pressure on the East China Sea and the disputed islands. Abe has a capable military that probably does not need American help, but he needs an unshakable confidence that the Americans will be there, ready and unflinching, if required. In Seoul, President Obama will find a somewhat more relaxed view of China—uneasy but not hostile. The Chinese ADIZ infringes on Korean territory as well. Here again, the requirement will be for reassurance that the U.S. security commitment is as reliable as gravity.

For the president, the real potential payoff from this trip will come in the visits to Malaysia and the Philippines—particularly the former. Shortly after China’s Xi Jinping assumed office, he made it clear that Chinese strategy would focus on winning the support of key Southeast Asian states—notably, Malaysia. It was no accident that in October (while President Obama was confined to Washington by the government shutdown), President Xi made a state visit to Kuala Lumpur where he gave an address to the Malaysian Parliament and announced a series of dramatic trade and investment initiatives. Malaysia’s Prime Minister, Najib Razak, was a gracious host, but he is no fool. He knows that China’s ambitions for regional dominance, even if accompanied by economic growth for all, will neuter Malaysian independence and sovereignty. America, by contrast, seeks a stable “rules-based order” of independent states with open sea lanes and a vibrant connection to a globalized economy that is entirely congruent with Malaysia’s own national interest. In sum, the Prime Minister knows that his country’s interests and future require a region where the United States, not China, is the strategic architect. But would he dare to bet Malaysia’s future and risk China’s anger and retribution on the conviction that the United States will be there to protect Malaysia now, tomorrow, and for the foreseeable future? That is a tall order, and if you are Prime Minister Najib you are likely to lay awake at night trying to determine the answer. It will be President Obama’s task to persuade him that he can rest easier—and then deliver on that promise.

The Philippines, more so than any other country in Southeast Asia, has, under President Aquino, opted for closer ties to the United States at the cost of growing Chinese irritation and anger. This is the direct product of China’s seizure of maritime territory very close to the Philippines and very far from China coupled with the six-decade-old security alliance with the United States. Aquino, like Najib, needs reassurance that American power will be real, credible, and adequate to cope with China. Aquino also needs tangible help in the form of boats and aircraft that can provide his country with the ability to patrol its maritime space. This brings with it an added and ominous complication. Improved Philippine naval capabilities will increase the odds of new and more frequent confrontations with Chinese patrols. If things turn violent, as they well may, Manila will expect its ally to come to its rescue. That will be something for the two presidents to talk about—seriously.