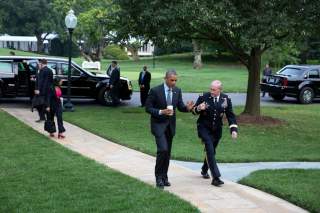 The White House has declared Ebola to be a top national-security concern. That ought to worry Americans. The last time a president tried to make a disease a national-security issue, he helped trigger a global pandemic that killed 50 million people.

Progressives like to expropriate the label of national security to help drive their agendas. Statist, centrally managed, with top-down direction, the national-security model is the perfect vehicle for any policy “crusade,” be it fighting global warming or raising taxes. Thus, for example, when the administration got the Chairman of the Joint Chiefs of Staff to label the "debt the biggest threat to national security," it had all the cover needed to press for cutting defense and raising taxes—two cornerstones of President Obama's progressive political agenda.

But playing "national security" progressive politics with public health can bring outright disaster. When the United States entered World War I, Woodrow Wilson played the national-security card early and often. The war effort became an excuse for everything from jailing political opponents to spying on everyday Americans. But, when the president used a global war as an excuse to preempt sound public-health policy, he reaped a global catastrophe.

In 1917, the war to end all wars was well under way. At Camp Funston within the boundaries of Fort Riley, Kansas, sergeants were turning recruits into doughboys. During their training, the soldiers picked up backpacks, rifles, helmets—and a new strain of flu. They carried all these with them as they traveled from the camp to the railroads, the big cities, the ports and, ultimately, overseas. On every step of the way to the trenches in Western Europe, they spread the deadly disease.

When news of the epidemic reached Washington, the White House decided it was a national-security problem. The British and French desperately needed reinforcements to turn the tide of the war; getting our boys over there was far more important than stopping the spread of the flu over here.

The administration insisted on pressing full speed ahead with the deployments. The White House also wanted every factory worker on the job and every red-blooded American to show up at mass rallies to buy more war bonds—all activities that spread the disease more quickly.

In less than a year, the Kansas outbreak had become a global pandemic. It was commonly referred to as the "Spanish flu." Spain was a nonbelligerent in the First Word War. The government had not imposed press censorship. As a result, widespread news of the disease's deadly progress appeared first in Spain. Most assumed that was where the problem started.

In the end, more died from the pandemic than from the war.

Stateside, at a military camp outside of Gettysburg, a young post commander named Dwight David Eisenhower ignored Washington’s advice to ignore the disease. Instead, he developed health protocols that broke the back of the disease’s run through the ranks. Impressed with the success of his methods, the Army ordered Eisenhower to dispatch his staff to other camps to train them on how to rein in influenza.

Likewise, many American cities got the disease under control only by ignoring the federal government and adopting responsible public-health policies.

The moral of the story is not that it’s 1918 all over again. Ebola and influenza are two very different contagious diseases. But this cautionary tale from the last century reminds us is that the best way to deal with a disease outbreak is to follow sound public-health policies, not cloud the issue with the trappings of national security.

When President Obama declared Ebola a national-security issue, he didn't calm people’s fears. He inflamed them. Many immediately jumped to suggesting all kinds of draconian solutions to keep the disease from getting here.

Additionally, the national-security talk muddled the nature of the response to stem the outbreak in West Africa. Breaking up the outbreak is clearly a humanitarian mission, not a national-security imperative. Providing some military support for overseas disaster and disease response can well be justified. But by trumpeting the deployment of troops, the president obscured the fact that what’s needed is a response supported by multiple U.S. government agencies and nongovernmental organizations.

As a result, Americans are busily debating the wisdom of sending several thousands of troops, rather than asking the more important question: Is U.S. assistance organized as efficiently and effectively as it should be?

Furthermore, the White House committed what is an unpardonable sin in responding to a public-health concern: it lost legitimacy. Rather, than make a concerted effort to deliver effective risk communications to the American people, the White House slapped a national-security label on the problem and advised us that it’s “unlikely” anyone with Ebola would ever enter the country and that the chances of an epidemic were “extremely low.” Essentially, the word from Command Central was "Don't worry, be happy."

While federal and state agencies did start getting the word out to hospitals on preparedness measures, it invested too little time in getting ahead of the issue and reaching out to Americans. Given the scale of the outbreak, it was impossible to rule out that at least a few cases would make it to American shores. By downplaying risks instead of playing it straight, the administration lost a lot of credibility with average Americans.

The president now must be on his "A" game and start providing adult leadership. That could start with more effective and vigorous risk communication and public-health responses, all framed as what they are: public-health and humanitarian issues—not pet national-security projects.

James Jay Carafano is a vice president of The Heritage Foundation and directs the think tank’s research into national security and foreign policy issues.