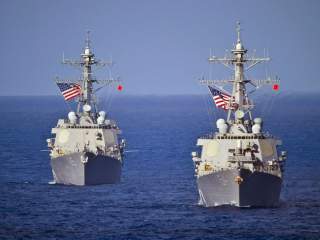 Territorial disputes in the South China Sea—involving China, Taiwan, Vietnam, Malaysia, Brunei and the Philippines—are destabilizing the region. Although not a claimant, the United States has a vested interest in the outcome. The U.S. Seventh Fleet has been operating in the area since the Cold War, and the maritime disputes involve the Philippines, a close American ally. In fact, far from being a peripheral interested party in the South China Sea, Washington plays a key role in determining the course of the disputes. Both government officials and academic observers have asserted that smaller states with interests in the dispute would have to rely on a resolution brokered by China and the United States.

Although the prospect of resolving the South China Sea disputes hinges on U.S.-China relations, an agreement orchestrated by Washington and Beijing could be highly problematic. As pointed out by Singapore's Ambassador-at-Large Bilahari Kausikan in a March 2016 public lecture, what Beijing and Washington agree on may not necessarily serve ASEAN or Southeast Asia's interests. Furthermore, the disputed maritime zone is but one of several areas of contention between the two major powers. A rising concern among Southeast Asian states holds that the Obama administration has fallen into the trap of maintaining peace at any price. This mode of thinking is not new. Former U.S. Secretary of State Henry Kissinger identified this fallacy during the Cold War when President Dwight Eisenhower conducted U.S.-Soviet relations based on the slogan "there is no alternative to peace." The context is different but the concept is the same. Because war seems no longer to be a conceivable instrument of policy, at least as observed by the Obama administration, any act of aggression short of war becomes acceptable. Unfortunately, such a fragile peace not only threatens the interests of smaller U.S. partners but also erodes America's credibility in the Asia Pacific.

When the United States places disproportionate emphasis on avoiding war and conflict, a few scenarios can occur; some have already been set in motion. First, it emboldens China to change the status quo of the dispute and establish a fait accompli of its territorial claims. Since the U.S. response to China's intensification of reclamation works in the South China Sea has been limited to rhetoric and unprovocative freedom of navigation operations, China can continue to push the envelope. Nothing Washington has done so far has slowed down Beijing’s pace of reclaiming artificial islands and deploying military assets in the disputed maritime area. It has become increasingly likely that Beijing will declare an Air Defense Identification Zone over the South China Sea.

Second, it forces Southeast Asian claimants to resort to self-help and trigger greater military buildup in the region. Vietnam and the Philippines have already begun improving their naval capabilities. At the same time, maritime law enforcement agencies have also seen an upgrade in equipment and increase in budget. Recent statistics released by the Stockholm International Peace Research Institute reveal that defense expenditure in Asia and Oceania increased by 5.4 percent in 2015 while the global increase was 1 percent. This increase includes China's defense spending, which then fuels the spending spree of the region. If the U.S. security umbrella refuses to open in anticipation of dark clouds, Southeast Asian states must beef up their own militaries.

Third, extraregional powers feel the need to step in before China asserts its claims further. Australia and Japan have political, economic and strategic interests in the South China Sea and have recently announced their intentions to deploy some of their military assets and participate in military exercises with the Philippines. Japan recently amended its constitution and joins the United States and the Philippines in their annual major bilateral exercise, “Balikatan,” in April 2016. Australia's Defense White Paper, announced in February 2016, indicates its growing concern over developments in the South China Sea. With more parties involved in the disputes, the situation could become more complicated, making a resolution even more unattainable.

Most significant is that Washington’s lack of initiative could irreversibly erode American credibility in the Asia Pacific. Although the involvement of Japan and Australia in the region's maritime dispute falls under their alliance relationship with the United States, their newfound activism in the area really stems from their proximity to the disputes. The fear of American disengagement from Asia and the Pacific is not a new trope in Tokyo and Canberra’s strategic thinking. Although the Pentagon has quashed reports of dissenting voices from Seventh Fleet commanders, the fact remains that the Obama administration lacks a game plan in the South China Sea. That the US has not ratified the UN Convention on the Law of the Sea is another blemish on American trustworthiness.

Assuming that China continues to deploy military assets and develop military bases in the South China Sea, the price to pay for this hollow peace will be high. Has the price for avoiding war been weighed sufficiently by President Obama and his advisers? When an unstable peace becomes too precarious to maintain, and looks to cost more than conflict, policymakers in Washington must not eliminate military action as an option. Kissinger's warning in his 1956 Foreign Affairs article is worth remembering: "If the phrase 'there is no alternative to peace' were to become accepted doctrine, it could lead to a paralysis of policy." Right now, it looks like Beijing understands this logic better than Washington.