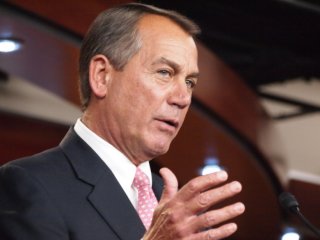 Last Saturday marked the one-year anniversary of the start of America’s campaign against the Islamic State of Iraq and Syria (ISIS). But after some 5,000 airstrikes—with some 3,500 U.S. soldiers on the ground—Congress has yet to hold an up-or-down vote on authorization for our latest Middle East war.

A year of illegal warmaking represents a new low in the erosion of constitutional checks and balances: an occasion for the country to reflect on the dangerous drift toward the normalization of presidential warmaking. Yet that milestone garnered far less public attention than the clown-car wreck of the first GOP primary debate last week.

Historian Arthur Schlesinger Jr. observed that the growth of the Imperial Presidency has been “as much a matter of congressional abdication as of presidential usurpation.” Over the past year, there’s been more than enough of both pathologies to go around.

To review: on August 7, 2014, President Obama announced that he’d “authorized” the first wave of airstrikes against ISIS in Iraq; in September, he expanded the war to Syria. It was six months before he got around to sending Congress a draft Authorization for the Use of Military Force (AUMF)—along with a cover note insisting that “existing statutes provide me with the authority I need” to wage war anyway.

Since then, Congress “has refused to meaningfully debate or vote,” on authorization for war, Senator Tim Kaine (D-VA) lamented at the Cato Institute on Thursday. In a June, Kaine noted the “excruciating detail” devoted to military minutia: “We will vote on vehicle rust, and we will vote on barracks mold. But we don't want to vote on whether the Nation should be at war.” Then again, his colleague Sen. Bob Corker (R-TN) shrugged, “Burning up legislative time, burning up capital, burning up goodwill on something that you know is purely an intellectual exercise when there are so many pressing matters? Maybe that's not so prudent.”

Sadly, Corker may be on to something. A new authorization might not be “prudent”—not because Congress might “burn up legislative time” doing its job—but because any resolution that could pass at this point might only end up expanding the president’s war powers even further. After all, prominent GOP lawmakers reacted to Obama’s draft authorization by complaining that the president hasn’t been imperial enough.

It’s even less likely that the current Congress could rouse itself to address the bigger problem: the transformation of the 2001 AUMF into an all-purpose enabling statute for presidential wars. That resolution, passed three days after the 9/11 attacks, and aimed at Al Qaeda and the Taliban, is the main basis for Obama’s claim that he doesn’t need new authorization to wage war against ISIS. Congress already had its vote—nearly 14 years ago—and it’s one Congress, one vote, one time.

The administration’s legal theory, offered somewhat sheepishly via anonymous officials in unsigned “talking points,” holds that ISIS is the “true inheritor” of Osama Bin Laden’s legacy. Never mind that Bin Laden’s designated “inheritor,” Ayman al-Zawihiri, has denounced and excommunicated the group: ISIS and Al Qaeda are pretty much the same thing, headlines like “Isis Beheads Leader of Al Qaeda Offshoot,” notwithstanding. That’s the administration’s legal cover for a new war in at least two countries, that could last “10 to 20 years.”

There’s no little irony in the fact that the candidate who promised to “turn the page” on Bush-era “deciderism” has forged new frontiers in unilateral warmaking. Resistance to reflexive militarism had been a running theme in Obama’s career—from his first public expression of foreign policy views, in a college newspaper article entitled, “Breaking the War Mentality”—through the 2002 peace rally speech against a “dumb,” “rash war” that became the centerpiece of his 2008 primary campaign. In last week’s speech defending the Iran deal, Obama burnished his hawkish bona fides by pointing out that he’d bombed no fewer than seven countries as president.

The institutional collapse at the other end of Pennsylvania was all too predictable, however. As Rep. Jack Kingston (R-GA) ruefully remarked at the start of the war: “A lot of people would like to stay on the sideline and say, ‘Just bomb the place and tell us about it later,’ …We like the path we’re on now. We can denounce it if it goes bad, and praise it if it goes well.”

It shouldn’t be that easy: the Framers thought they’d designed a system that would “not hurry us into war,” one that would force deliberation and ensure that we would not, as a young state senator named Obama once put it, “travel down that hellish path blindly.” Over the past year, this president and this Congress taken us down the path to a very different system, one that will not hurry us into peace.

Gene Healy is a vice president at the Cato Institute and author of The Cult of the Presidency.