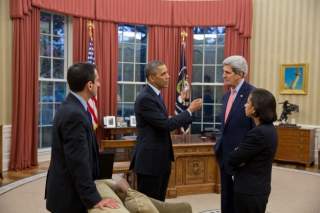 When President Obama declared last September that he would "degrade, and ultimately destroy, ISIL through a comprehensive and sustained counterterrorism strategy" without the use of American ground combat troops, most observers were skeptical. Now, five months later, the president is asking Congress to authorize him to dramatically escalate the fight, including the use of ground combat troops, ostensibly in very limited numbers with a very limited mission for a limited period of time. In fact, it’s likely to lead to expanded American involvement.

Wednesday morning the White House released a letter from the president to the Congress declaring, "Although existing statutes provide me with the authority I need to take these actions, I have repeatedly expressed my commitment to working with the Congress to pass a bipartisan authorization for the use of military force (AUMF) against ISIL. Consistent with this commitment, I am submitting a draft AUMF that would authorize the continued use of military force to degrade and defeat ISIL."

The text of the draft "Joint Resolution: To authorize the limited use of the United States Armed Forces against the Islamic State of Iraq and the Levant" declares that said authority " does not authorize the use of the United States Armed Forces in enduring offensive ground combat operations" and "shall terminate three years after the date of the enactment of this joint resolution, unless reauthorized." But it does expand the mission to "associated persons or forces," which it defines as "individuals and organizations fighting for, on behalf of, or alongside ISIL or any closely-related successor entity in hostilities against the United States or its coalition partners."

Wednesday afternoon, Obama gave a very short speech stating that, while the ongoing operations against ISIL are going swimmingly— “We're disrupting their command and control and supply lines, making it harder for them to move. We're destroying their fighting positions, their tanks, their vehicles, their barracks, their training camps, and the oil and gas facilities and infrastructure that fund their operations. We're taking out their commanders, their fighters, and their leaders”— and "our coalition is on the offensive, ISIL is on the defensive, and ISIL is going to lose," we need "flexibility" for "unforeseen circumstances" and "continuity."

Returning to the Constitutional requirement that non-emergency military action be authorized by Congress is a good idea. It’s a position Obama articulated passionately during his brief tenure in the Senate and as a presidential candidate. Yet, it's worth noting that, since assuming the Oval Office, Obama has been as aggressive as any of his predecessors in finding ways around that inconvenience when it suits him. Aside from wildly escalating the drone war around the globe, during the Libya campaign in 2011 Obama ignored even the modest restrictions imposed on him by the War Powers Resolution, simply declaring that the combat sorties American forces were flying weren't "hostilities." The only time he's actually asked Congress for its blessing to go to war was to give him an excuse to avoid taking strong action against Syria's Assad for crossing the "red line" of chemical weapons use.

Regardless of the apparent hypocrisy, getting Congress involved is not only consistent with the law of the land but it's also shrewd politically and important strategically. Self-serving or not, Obama is right when he declares, "we are strongest as a nation when the President and Congress work together." If we're to get more heavily involved in this fight against ISIL, there ought to be a public debate and bipartisan approval.

Indeed, this may well be one of those rare times where Congressional Republicans are enthusiastically on his side while Obama's co-partisans constitute the opposition. So far, the main objection prominent Republicans are offering is that Obama is expanding the war too slowly and asking for too little power for himself.

House Speaker John Boehner issued a statement that "Any authorization for the use of military force must give our military commanders the flexibility and authorities they need to succeed and protect our people. While I believe an AUMF against ISIL is important, I have concerns that the president's request does not meet this standard." Meanwhile, his Democratic counterpart, Nancy Pelosi, said, "We hope to have bipartisan support for something that would limit the power of the President, but nonetheless protect the American people in a very strong way."

In terms of the policy itself, it's easy to sympathize with the president's plight. ISIL is wreaking havoc in a vital and already fragile region and murdering innocents in particularly graphic, public fashion. There's enormous pressure on him to "do something" and yet very little appetite for the sort of military response that could potentially yield quick, decisive results. So, while I was skeptical that our months-long game of Whack-a-Mole would do the trick, it seemed the least bad option given the reality that there are simply too few local fighters willing to do the dirty work for us, and fewer still who are capable of doing it.

Further, politics aside, the existing approach (I won't call it a "strategy") against ISIL is consistent with the constructivist incrementalism that has characterized Obama's foreign policy.

While, "Our successes will happen in fits and starts, and sometimes there's going to be a breakthrough and sometimes you'll just modestly make things a little better" makes for a lousy bumper sticker, it's a perfectly prudent approach in a world of bad options. And, while there are mixed reports from analysts far better positioned to evaluate the facts on the ground than me, there's reason to believe things are indeed modestly better in Iraq and Syria than they would otherwise be had we not intervened.

Still, most of the "comprehensive strategy" Obama again outlined in Wednesday's speech is fantasy:

A systematic and sustained campaign of airstrikes against ISIL in Iraq and Syria. Support and training for local forces on the ground, including the moderate Syrian opposition. Preventing ISIL attacks, in the region and beyond, including by foreign terrorist fighters who try to threaten our countries. Regional and international support for an inclusive Iraqi government that unites the Iraqi people and strengthens Iraqi forces against ISIL. Humanitarian assistance for the innocent civilians of Iraq and Syria, who are suffering so terribly under ISIL's reign of horror.

Aside from the Kurdish Peshmerga, there really are no significant local forces to oppose ISIL. If there was ever a "moderate Syrian opposition," it's gone---or allied with ISIL against their common enemy Assad. Iraqi forces remain a sad joke despite a decade of American and Coalition effort and there's no near-term hope for a government that unites the Iraqi people.

And, of course, as the president reiterated again Wednesday, there's no stomach in America or elsewhere in the West to fight another ground war in that part of the world. Not only does Obama specifically outline that in the draft AUMF but he stressed it in the speech: "The resolution we've submitted today does not call for the deployment of U.S. ground combat forces to Iraq or Syria. It is not the authorization of another ground war, like Afghanistan or Iraq. The 2,600 American troops in Iraq today largely serve on bases -- and, yes, they face the risks that come with service in any dangerous environment. But they do not have a combat mission. They are focused on training Iraqi forces, including Kurdish forces." And, again, for emphasis: "As I've said before, I'm convinced that the United States should not get dragged back into another prolonged ground war in the Middle East. That's not in our national security interest and it's not necessary for us to defeat ISIL."

So, what is it that the American reinforcements are going to be doing? Why, "giving us the flexibility we need for unforeseen circumstances." For instance? "For example, if we had actionable intelligence about a gathering of ISIL leaders, and our partners didn't have the capacity to get them [editor's note--they wouldn't], I would be prepared to order our Special Forces to take action, because I will not allow these terrorists to have a safe haven."

This seems reasonable on its face. If it's worth the risks to our air crews to conduct operations with no end in sight, it's probably worth taking calculated risks with small commando squads if there's a sufficiently valuable mission that requires their skill set.

At the same time, it's hardly inconceivable that the man who argued that combat sorties over Libya didn't constitute "hostilities" would come up with a creative interpretation of "enduring offensive ground combat operations" if he deemed it necessary. For that matter, since the AUMF wouldn't expire until a year into Obama's successor's term if it were passed tomorrow, it might be the next Commander-in-Chief making that call.