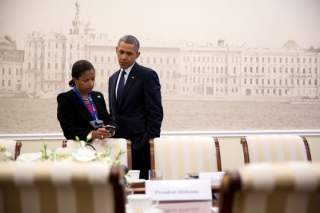 The Obama administration’s long-overdue update to the National Security Strategy hit the streets Friday morning. It is in many ways a remarkable document, lucidly describing the foreign (and domestic) policy vision of the only global power, nodding to an enormous number of allies, partners and stakeholders. It is, however, only loosely about national security. More importantly, it’s decidedly not a strategy.

Despite President Obama’s assurance in the introductory paragraph that the document “sets out the principles and priorities to guide the use of American power” and his recognition that “our resources will never be limitless. Policy tradeoffs and hard choices will need to be made,” he goes on to list in bullet form eight “top strategic risks to our interests” that, in their own right and as expanded upon in the rest of the document, are anything but limited or prioritized.

Taken in microcosm, the dozens of unprioritized priorities of the 2015 NSS are banal. There’s little over which to disagree on a point-by-point basis. Indeed, like most of its predecessors, it reads like a summary of recent issues of publications like Foreign Affairs and The National Interest written by junior bureaucrats on the National Security Staff that’s then been edited by the president’s domestic-policy advisors—which, in fairness, is pretty much what it is.

Given that neither America’s essential position in the world, nor the administration in the White House has changed since the May 2010 release of the last NSS, it’s perhaps unsurprising that little is new here. There are nods to the Arab spring, the Asia pivot, Russia’s aggression in Ukraine, the opening to Cuba and changes to the global energy market—as well as repeated references to the improved state of the U.S. economy—but otherwise the priorities are pretty much as before. Which is to say, there are no priorities.

As with its predecessor, a recurrent theme of the document is what the president hails in his introductory letter as “an undeniable truth—America must lead.” Indeed, he assures us, “The question is never whether America should lead, but how we lead.”

Apparently, “never” is to be taken literally here, as the issues on which America must lead are endless. Indeed, the first section posits that “there is no shortage of challenges that demand continued American leadership.” Everything from violent extremism and cybersecurity to climate change and infectious degrees to stopping the spread of nuclear weapons is on the agenda. Nor is it bounded by geography; America must lead everywhere from Europe to Asia, Africa to Latin America, from the oceans to outer space.

The eight “top strategic risks to our interests” around which “we will prioritize efforts” are both reasonable and exhaustive:

– Catastrophic attack on the U.S. homeland or critical infrastructure;

– Threats or attacks against U.S. citizens abroad and our allies;

– Proliferation and/or use of weapons of mass destruction;

While one could stretch that to include literally everything, the adjectives (“severe,” “major,” “significant”) potentially allow for begging off American leadership, vital though it may be, in a pinch.

Alas, the language of the “Prosperity” section says otherwise, as everything from creating “good jobs” to “expanding access to early childhood and affordable higher education” to immigration reform, “opening markets and leveling the playing field for American workers and businesses abroad” and “eliminat[ing] barriers to full deployment of the US innovation in the digital space” is cited as vital to U.S. national security.

The “Values” section commits the nation to "promoting universal values abroad," which is laudable in abstract, but difficult in the particular. But then it goes much further in declaring, “We will be a champion for communities that are too frequently vulnerable to violence, abuse, and neglect—such as ethnic and religious minorities; people with disabilities; Lesbian, Gay, Bisexual, and Transgender (LGBT) individuals; displaced persons; and migrant workers.” That’s an agenda that’s controversial domestically, let alone “universal.” More importantly, while I happen to think it’s the right instinct by which to manage U.S. foreign policy, it’s simply not something that belongs in a national-security strategy. It’s tactical level stuff and neither this administration, nor the next are going to prioritize LGBT rights over hard security issues in dealing with our closest European allies—much less Russia, China, Iran or Saudi Arabia.

Similarly, the “International Order” section is laudable for its sentiments, but the very opposite of a strategy.

It touts the benefits, which are unassailable, of working when we can with the United Nations and other international organizations and our allies and partners.

It continues the recovery from the “pivot to Asia” debacle with a more nuanced “rebalance to Asia and the Pacific,” where we’ll be “modernizing our alliances with Japan, South Korea, Australia, and the Philippines” while “deepening partnerships” with Vietnam, Indonesia and Malaysia; welcoming “the rise of a stable, peaceful, and prosperous China” while preparing for the alternative; strengthening “our strategic and economic partnership with India,” while we “continue to work with both India and Pakistan.”

But don’t worry, none of that will come at the price of lessened attention elsewhere.

We’ll be maintaining “a profound commitment to a Europe that is free, whole, and at peace,” including “steadfastly support[ing]the aspirations of countries in the Balkans and Eastern Europe towards European and Euro-Atlantic integration,” while also “continu[ing] to transform our relationship with Turkey, and enhance ties with countries in the Caucasus while encouraging resolution of regional conflict.” That the goals are mutually incompatible, apparently, doesn’t make it any less worthwhile.

Naturally, seeking “stability and peace in the Middle East and North Africa” will continue at full steam, including goals to “dismantle terrorist networks that threaten our people, confront external aggression against our allies and partners, ensure the free flow of energy from the region to the world, and prevent the development, proliferation, or use of weapons of mass destruction,” while “investing in the ability of Israel, Jordan, and our Gulf partners to deter aggression while maintaining our unwavering commitment to Israel’s security, including its Qualitative Military Edge.”  Simultaneously, “[w]e remain committed to ending the Israeli-Palestinian conflict through a two-state solution that ensures Israel’s security and Palestine’s viability. We will support efforts to deescalate sectarian tensions and violence between Shi’a and Sunni communities throughout the region. We will help countries in transition make political and economic reforms and build state capacity to maintain security, law and order, and respect for universal rights.”

Moving on to the rest of the African continent, “We will increase trade and business ties, generating export-driven growth,” while “investing in tomorrow’s leaders,” “strengthening civilian and military institutions,” and “deepening our security partnerships.”

Closer to home, “[w]e will continue to advance a Western Hemisphere that is prosperous, secure, democratic, and plays a greater global role.”

Again, very little of this is objectionable. Indeed, with the major exception of continuing to ignore regional realities in the Middle East and Eastern Europe—perhaps exacerbated by, but certainly not invented by, this administration—I support almost every sentence of it. But it’s a wish list, not a strategy.

The president recognizes that this “is an ambitious agenda” and allows that “not everything will be completed during [his] Presidency.” Understatement aside, it doesn’t have to be. Our Cold War containment strategy took the administrations of eight presidents to reach fruition. But it at least outlined what was most important and helped shape funding, procurement, deployment and other key decisions. The present document outlines a better future, but gives us precious little guidance on how to get there.