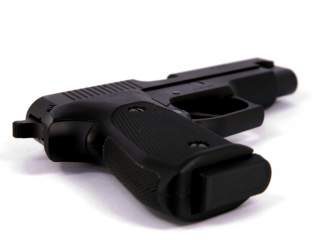 Frustrated by his inability to bend Congress to his will, President Barack Obama has once more picked up his trusty pen and phone and issued a series of ‘executive actions’ on gun control.

What the President Announced

The president is asking Congress to provide funding for, among other things, two hundred new agents and investigators for the Bureau of Alcohol, Tobacco, Firearms and Explosives (ATF) to enforce existing gun laws and a new $500 million investment to increase access to mental health care.

He announced that the FBI will hire an additional 230 examiners and support staff to expedite the process of conducting background checks using the National Instant Criminal Background Check System (NICS) and has directed the FBI to partner with the U.S. Digital Service to modernize NICS.

He announced that, at his direction, Attorney General Loretta Lynch had convened a call with U.S. Attorneys around the country to instruct them (as if they didn’t already know this) that they should continue targeting the “worst of the worst” gun crimes and continue to assist their communities in combating gun violence.

She will also be preparing a memorandum encouraging them to renew domestic violence outreach efforts. The president has also instructed Lynch to write a letter to states stressing the importance of receiving complete criminal history records, as well as information about persons disqualified from possessing guns because of having been “committed to a mental institution” or “adjudicated as a mental defective” or having been convicted of a qualifying misdemeanor crime of domestic violence.

He has also directed the Departments of Defense, Homeland Security and Justice to conduct or sponsor research into gun safety technology and to promote the use and acquisition of smart gun technology.

None of these proposals are legally problematic, as any president remains free to provide guidance to federal agencies and to ask Congress to appropriate money to fund his priorities. Indeed, gun rights proponents have long been urging the president to update and improve the National Instant Criminal Background Check System, which was the impetus behind, for example, the NICS Improvement Amendment Act of 2008.

Some of the president’s announced actions may, however, be subject to legal challenge, as the details emerge in the coming days. It is no secret that the president wishes to close the so-called “gun show loophole” by expanding the number of small-scale sellers who must register (and be licensed) as federal firearms dealers, which would then require them to perform background checks whenever selling a weapon.

Federal law provides someone is “engaged in the business” of being a firearms dealer whenever “a person who devotes time, attention, and labor to dealing in firearms as a regular course of trade or business with the principal objective of livelihood and profit through the repetitive purchase and resale of firearms, but such term shall not include a person who makes occasional sales, exchanges, or purchases of firearms for the enhancement of a personal collection or for a hobby, or who sells all or part of his personal collection of firearms . . . .”

The Role of the ATF

The president announced that the ATF has “clarified” that a person can be “engaged in the business” of being a firearms dealer regardless of the location in which firearms transactions are conducted and even a few transactions can trigger the licensure requirement “when combined with other evidence” sufficient to establish that someone is engaged in that business.

Although it remains to be seen what enforcement actions ATF pursues, this is not really a new development, as several courts have held that it is what you are doing, not where you are doing it, that matters, and federally-licensed firearms dealers have long been required to conduct background checks whether they sell guns in their store or at a gun show.

Courts have also held that other factors, such as holding yourself out as a firearms dealer or engaging in repetitive transactions for profit, ought to be taken into consideration when making such a determination.

Most significantly, nothing in this “clarification” changes the definitions contained in existing law, and any attempt by this (or any) administration to unilaterally re-write those definitions to reclassify individuals who only engage in “occasional sales” as gun dealers subject to licensure requirements would certainly be challenged in court, and would likely fail.

If the president wants to rewrite the law, he must work with Congress to do so.

Who Qualifies as Mentally Ill?

Another potentially troubling issue involves the president’s announcement that the Social Security Administration will begin the rulemaking process to ensure that “appropriate records” are reported to the National Instant Criminal Background Check System pertaining not only to people who have been determined to be mentally ill or legally incompetent by a judge, but also to people “who have a documented mental health issue, receive disability benefits, and are unable to manage those benefits because of their mental impairment.”

If a veteran is being treated for PTSD (post traumatic stress disorder) or someone is prescribed anti-depressants or anti-anxiety medication by a psychiatrist, will that person now have “a documented health issue”?

If a retiree receives social security benefits through a “representative payee,” will that person now be deemed “unable to manage those benefits” because of some “mental impairment”?

Can a government bureaucrat take away a constitutional right based on these bases without a judicial hearing? That remains to be seen.

While gun violence is a legitimate subject of public concern, it is important to remember that while gun ownership in this country has risen dramatically over the last several years, gun-related deaths (other than suicide) have declined.

Many law-abiding citizens choose to exercise their Second Amendment rights to protect themselves and their families, and recognize that there may come a time when they are confronted by an armed assailant and seconds matter—but the police are minutes away.

They should not be prevented from doing so by ill-conceived and possibly unlawful policies implemented by executive fiat.

John G. Malcolm oversees the Heritage Foundation’s work to increase understanding of the Constitution and the rule of law as director of the think tank’s Edwin Meese III Center for Legal and Judicial Studies. This article first appeared in the Daily Signal.