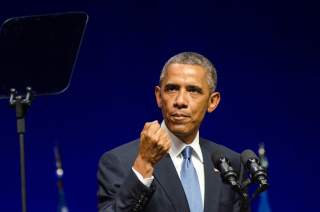 Jay Solomon’s new work The Iran Wars pulls the curtain from behind the Middle East policies of both the George W. Bush and Barack Obama administrations. Yet while the book is being eagerly plumbed by those seeking the juiciest tidbits to explain the specifics of U.S. policy towards the Islamic Republic of Iran, Solomon’s coverage also contains important observations about how U.S. national-security decisionmaking is evolving. Moreover, after years of having experts suggest that these developments are aberrations, perhaps it is time to accept that there is a “new normal” in how America conducts its foreign policy.

First and foremost, Solomon’s account of how the Obama administration conducted its affairs vis-à-vis Tehran further confirms the shift in the center of gravity in decisionmaking away from the formal cabinet officers charged with responsibility for U.S. national security, and towards the staff of loyalists clustered around the president in the White House: what I and others have termed “palace politics.” This is not to suggest that people like the secretaries of state or defense (or their deputies) are uninfluential or peripheral—after all, they are the ones who must manage a large and unwieldy national security bureaucracy—but that they may or may not be the expert personnel who enjoy the president’s trust or speak with the president’s voice. The Obama administration’s outreach to Iran was carried out by direct presidential emissaries often operating in secret, and while there was a formal negotiating process around the rubric of the Permanent Five of the United Nations Security Council, there was a second, secret track that turned out to be far more influential. Even when U.S. officials with the formal bureaucratic roles within the national-security establishment took part in the second, secret bilateral talks directly between Iranian and American officials (while the “official” P5 talks were ongoing), the Iranians soon came to realize that it was those with the access in the White House, the representatives of the “palace,” who carried greater weight.

For those who might be inclined to disregard Solomon’s reporting as representing conservative bias, on this matter his account is confirmed by those on the left; Gareth Porter’s accounts of the Iran nuclear talks reveals that Iranian officials realized that American bureaucrats—all the way up to the secretary of state—were being “﻿kept on a short leash in the negotiations,” reporting to the national security advisor and the White House staff. In much the same fashion, the American side also had to sort out the difference between Iranians with impressive formal titles and who actually represented and spoke for the supreme leader, the ultimate center of power and authority within the Islamic Republic.

Yet the erosion in the status and position of the secretary of state as the “chief diplomatic officer” of the United States continues. Add to that concerns in the future as to whether the president’s most trusted confidants could pass muster in Senate confirmation, and the legal reality that confirmed cabinet officers have an obligation to testify before the legislative branch (whereas presidential staff are covered under the doctrine of “executive privilege”) and it creates incentives to shift more of the advising (and some of the communicating with foreign governments) away from the formal bureaucracy and to the White House staff.

This question of “who speaks” for the United States is also taken up in the growing tug of war between the executive and legislative branches. War powers have already been attenuated, with presidents increasingly ordering military actions on the basis of their Article II authority as commander in chief, citing pre-existing international commitments and broad-based authorizations such as the post–9/11 Authorization for the Use of Military Force, or redefining what the U.S. military does as not direct combat but as training, advising, or assistance, so as to avoid triggering the War Powers Act.

But new tools have emerged for the president to retain a much greater degree of freedom from constraint in the diplomatic arena as well. The Iran agreement was never constituted as a treaty, which would require Senate confirmation, and the core of its provisions were enabled via resolutions of the United Nations Security Council—whose U.S. ambassador is instructed by the president, not the Congress, but whose resolutions, once passed, are binding on the United States (if Washington has not exercised its veto) per the 1945 Senate ratification of the UN Charter. The complicated political scheme that was developed to give Congress a “voice,” cleverly set up for members of both chambers to have to vote to disapprove rather than to cast an affirmative ballot, gave the White House a safe cushion, because the bar to disapprove the agreement was set much higher than if the Congress was called upon to affirmatively ratify the deal. Congress thus got its voice without having to own responsibility for the deal. The model for getting a problematic agreement de facto ratified—to pursue an executive agreement—was repeated this year in terms of a controversial climate-change pact whose validity rests not on Senate ratification of a treaty but on a presidential signature and a directive to executive-branch agencies to follow its provisions.

The lessons that foreign governments might take from all of this is to throw out any basic U.S. civics text in their embassy libraries in order to learn the real lessons of how things get done: find the right people who have the president’s ear within the White House (rather than assuming that the people with the impressive sounding bureaucratic titles are the focal point), and take a chance that a deal reached directly with the president will, over time, become the default status quo, rather than risk a treaty failing to gain the approbation of the legislative branch. As I’ve noted in these pages, any of Barack Obama’s successors in the Oval Office are likely to continue to want to keep critical national-security decisions centralized in the White House, rather than to parcel out responsibility either to the bureaucracy or the Congress.

Solomon’s narrative also reveals another important shift that has been taking place: the emergence of new players at the national-security table. Two new groups now have greater cachet to claim their places: the financiers and the hackers. In an environment where military force is often taken off the table as too politically risky, and where diplomacy unarmed seems to be less effective, there have to be new ways to engage in compellence activities. If the United States cannot force its will or plead (or beg) its case, the national-security toolbox has been expanded. Certainly, the expansion of our dependence on computers to store our data, to handle our communications, to conduct our commercial transactions and to run our equipment gives new opportunities for Washington to harness America’s continuing technological advantages and innovative technology sector to utilize those points of pressure to nudge other countries to a position more amenable to American interests.

But the Iran story highlights the transformation of the Department of the Treasury in becoming a more prominent part of the national security enterprise. For a long time, as Bob Blackwill and Jen Harris have noted, the United States, “despite boasting the most powerful economy on earth . . . too often reaches for the gun instead of the purse in its foreign policy. The country has hardly outgrown its need for military force, but over the past several decades, it has increasingly forgotten a tradition that stretches back to the nation’s founding: the use of economic instruments to accomplish geopolitical objectives.”

The United States had already interrupted much of its commerce with Iran after the 1979 revolution, but Iran had been able to adapt. However, as the United States began to develop and apply much more creative financial sanctions—to “follow the money,” to freeze assets, and, most importantly, to deny Iran access to U.S. dollars and the ability to wire funds and to use the international financial infrastructure—Iran found it increasingly difficult to conduct trade and to pay for goods and services from any country, not just from the United States. Stuart Levey, who served in both the Bush and Obama administrations as undersecretary of the treasury for terrorism and financial intelligence, crafted a financial strategy that forced other countries and their banks and companies to have to decide between doing business with the United States (and to use U.S. dollars and U.S. financial institutions) or with Iran. To the extent that Iran did not believe that the United States was credible in threatening to use force, the financial sanctions had much more impact in bringing Iran to the negotiating table.

As long as the dollar remains the world’s de facto reserve currency and the preferred medium of exchange for many countries engaged in business, America has critical tools at its disposal to bring pressure to bear without resorting to military force.

Whether the United States got the best deal it could from Tehran is for others to debate. How Iran was brought to the table and who spearheaded those talks, however, demonstrates a shift that is underway in how the United States conducts its national security.